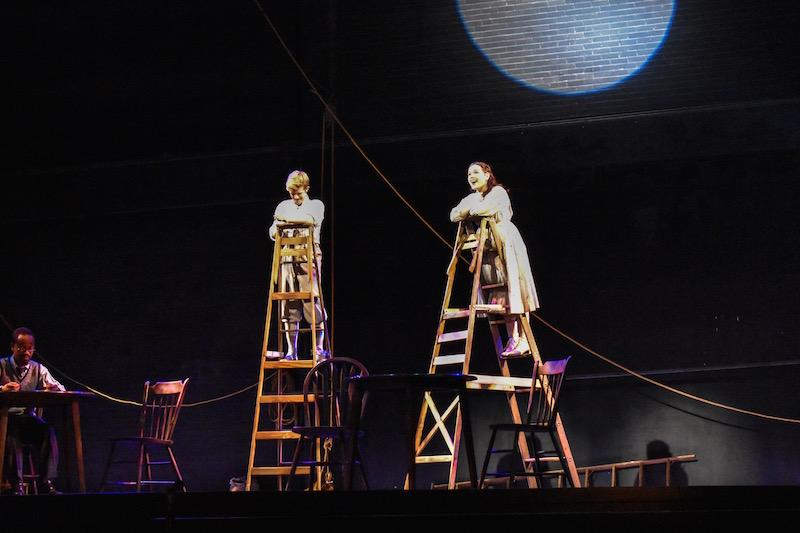 Aptly titled “Our Town,” the play illustrates the daily lives of people living in the quiet community Grover’s Corners, New Hampshire. As the story unfolds, patrons watch as the primary characters Emily Webb and George Gibbs become friends and fall in love, only to be inevitably separated by death.

American playwright Thornton Wilder‘s “Our Town” first appeared on Broadway in 1938 and would go on to win the Pulitzer Prize for drama. For those of you doing the math, that was over 80 years ago. So, how can a play about daily life from an entirely different era possibly translate to contemporary life? Well, the story may be more timeless than you think.

Wilder’s idea of the stereotypical town was likely different in some ways, especially concerning provincialism, lifestyle, technology, etc. On the other hand, the themes from the play regarding community, love, relationships, ignorance, death…these are all still relevant today. In this way, “Our Town” really does reflect our town.

In addition, perhaps counterintuitively, the play’s adaptation into an opera provides a certain freshness and nuance to the work that makes it all the more compelling to watch. More exciting still, five of the roles have dual casting.

The stage is simple. Other than the use of chairs and the occasional ladders, there are no props or scenery. This was Wilder’s vision. Worldbuilding for Wilder does not come from detailed set design. Instead, it comes from the forming of relationships. Some of the standard ones would be the relationships the townspeople have with each other. Less conventional, though, is the relationship the audience forms with the character known as the Stage Manager.

Critics and patrons alike were intrigued and puzzled by the minimalist stage and the inclusion of the Stage Manager. He seamlessly glides in and out of the realms of theater and metatheatre. He interacts with the townspeople as a member of the community (his role as Mr. Morgan and the Priest who marries Emily and George in Act 2) and with the audience and his actors (he prompts certain actors and scene changes.) In other words, the Stage Manager is an authoritative guide for the audience. This proves all the more interesting when considering how Wilder himself played the Stage Manager in some early productions.

Due to the play’s episodic nature, it is no wonder that the closing act should hold the narrative and philosophical climax. As Act 3 begins, almost a decade has passed. Many familiar townspeople– Mrs. Soames, Mrs. Gibbs, Mr. Stimson, to name a few– have died, including Emily. She is buried in the Grover’s Corners cemetery. The audience watches as she enters the stage, dressed in white, to fill her place among the dead.

The remaining scenes to come are perhaps the most poignant. Not wanting to let the living world go, Emily goes back to her fondest memory: her 13th birthday. It is not all that she expected, though. Upon reliving that day, Emily discovers how much she took for granted when she was alive. Saddened by her realization, she decides to return to her grave, though not without saying her goodbyes.

“Oh, earth, you’re too wonderful for anybody to realize you.”

With rich orchestral accompaniment, a stunning variety of voices, and incredible wit, “Our Town” transforms the simple stage into a mythical community that, with all its faults and beauty, reflects our society, our town.

The Grover’s Corners choir needs you: