Hey Mustangs! DJ Mattioli here, back again with your monthly playlist of important songs to know, and this time I’ve got more than ever to share with you. I’m super excited about this edition, probably because the songs I’ve rounded up for you all today just fill me with life, and I hope they do the same for you.

We’re slowly but surely coming out of winter and into the most beautiful time of year, so I tried to pick songs for all the moments you’ll spend sitting out on the lawn outside Dallas Hall enjoying the sun, driving around with your best friends, going on adventures, and making memories on those sleepless nights.

Starting off with some groovy, vintage feels from Mura Masa today. To be honest, I don’t have much to say about this guy, he seems pretty mysterious on the Internet, but what I do know is that he’s only 18 years old and his music has been making waves. If you dig this, check out his Soundcloud and try not to get lost listening to all the magic he makes.

2. Snakehips – Forever (Pt. II) feat. Kaleem Taylor
If you regularly follow these podcasts, you should know by now that Snakehips are my absolute number one. They recently dropped a new EP with three brand new tracks, including this one. I love their old school R&B meets happy-go-lucky electronic feels. They da best. Seriously, everything they touch turns to gold.

4. Marian Hill – Got It
If you’ve hung out with me at all the past couple weeks, you’ll know this has been my go-to song of the moment. You might also recognize this from that one Taco Bell Sriracha commercial, and although I’m not the biggest TB fan (Velvet Taco all the way over here), I’m stoked to see Marian Hill get some air time. Play this song when you work out and I promise you will wake up the next day looking ripped.

5. Kungs – West Coast feat. Molly
This delicious and sexy Lana del Rey cover comes to us from upcoming French producer, Kungs. Kungs, in my opinion, is one of the top contenders in that genre of deep (and sometimes tropical) house, this song being case in point. He’ll be blowing up this year, I’ve got a feeling, so take note now.

6. Young Summer – Blood Love (Big Wild Remix)
Speaking of artists on the rise… I was lucky enough to catch Big Wild at his show at Three Links this week (you can read about it here) and he was AWESOME. Seriously, this guy not only makes some good music, but when he plays it live, it’s on a whole other level. This remix is one of his latest releases which is why I included it, but I highly recommend checking what else he’s put out there.

7. Black Honey – Madonna
What better than some upbeat, old school surf rock to cruise to with the top down. This song from the relatively young UK band, Black Honey, is the perfect track for that. And probably on repeat, too. Reminds me a little of Dragonette, but with a more grungy feel. Can’t wait to see where they go from here.

8. Hot Natured – Reverse Skydiving feat. Anabel Englund
So over spring break, I went to this small scale music festival in San Diego called CRSSD, and it was one of my favorite festival experiences I’ve had by far. So many talented artists including Thomas Jack, Odesza, Chromeo, Lido and Bixel Boys, just to name a few. But one of the best parts about going to a festival, in my opinion, is falling in love with an artist you’ve never heard before while hearing them live. This time around, Pleasure State was that group for me. During their set they dropped this song from Hot Natured, and the incredible songstress Anabel Englund was right there with them singing it live. It was dope to say the least, and once you start listening to this I’m sure you’ll be able to get a feel for it yourself.

9. Major Lazer & DJ Snake – Lean On feat. MØ
I love this most recent release from Major Lazer. It’s not too loud or crazy, but still gets your body moving, especially with the distinct contributions from DJ Snake and vocals from the fabulous MØ. The music video is also pretty entertaining to watch, and while most of it seems to have been filmed in India, for reasons I’m unsure about, there are a select few scenes that were filmed in the Stockholm City Hall (yay Sweden!), where they hold the Nobel Prize ceremonies. Not a bad set for a video.

10. Mark Knight – Your Love
This song also came into my life during Spring Break when one of my fellow music loving friends would blast it almost anytime he had the chance – during the pregame, at the after party, or as loud as it would go in the car while speeding down that Southern California freeway late at night. It’s a pretty dark track, remixing Kylie Minogue’s “Can’t Get You Out of My Head” to the point you can hardly even recognize it, but it’s good. And you probably won’t be able to get this out of your head, either.

11. Kanye West – All Day feat. Theophilus London, Allan Kingdom, and Paul McCartney
Kanye has been creeping back into the game so you know I had to include this one on here! If you’ve already been jamming out to this as much as I have, then move along to the next track. But if this is the first time you’ve heard it, lemme tell you, you’re in for a treat. This beat? It’ll you hooked from the beginning. Also, I feel like this song shows Kanye’s ability to maintain his rank as a hip hop god by adapting to new styles in music. For example, I feel a lot of influence from the underground rap style that blew up last year, like Young Thug and Rae Sremmurd. Listen closely to the first verse. But Kanye toys with it in his own way, making this song a true original. Especially with that insane combination of featured artists!

12. PYRMDPLAZA – Sally Meets Mr. Wrong
I pulled this track from the “Love is King” compilation by my favorite, Soulection, a release that celebrated them reaching the 200,000 follower mark on Soundcloud. The compilation, which you can download here for free, is full of great stuff, but I really liked this one from PYRMDPLAZA in particular. Can anyone recognize that sample in the middle? It’s got me going crazy.

13. Oddisee – That’s Love
You know what’s love? My feelings for Oddisee. This DC based rapper has a wonderful voice to listen to, the kind that is both fast but still totally intelligible. Now with those rhymes over the brass filled backtrack… sounds like summertime to me. I’m talking about breaking open a fire hydrant and dancing in the street in barefeet kind of summertime. That’s love.

14. San Cisco – RUN
Ugggghhhhh there is so much good music in Australia! San Cisco comes to us live from Fremantle on the west coast of the land down under. They’ve got a great sound, again that summery, vintage punk rock and roll feel that I’m apparently obsessed with right now. This one goes great during both day and night.

15. Brooke Fraser – Kings & Queens (Zimmer remix)
Another wonderful chill, deep house producer from France here – introducing Zimmer. I listen to his stuff often but I feel like I’ve been subconsciously hearing this song everywhere, so I’m including it here so you can start hearing it for yourself as much as I have. According to his Soundcloud, Zimmer claims he “made this remix in Seoul, wandering around the city at night,” so take yourself there. Or downtown Dallas might substitute just fine otherwise.

16. George Maple – Where You End And I Begin feat. Grande Marshall
First of all, would just like to clear the air and let my listeners out there know that George Maple is in fact, a woman. Not only is she just a woman, she is a beautiful woman, and a great singer. You might recognize her sweet, sensual voice from her appearance on Flume’s “Bring You Down,” which makes sense considering their both Aussies. But keep your eye on Miss Maple, she’s headed right up there with other current femme fatales like BANKS and Aluna Francis.

17. BNJMN & Oshi – 808Luv
Ooooooh this song gives me a serious case of the feels every damn time I hear it. Another Soulection song, this one is a clutch go-to track at many opportunities, from when you’re sitting down to get started studying, when you’re cruising at sunset, when you’re trying to set the mood, or just get away from it all. Be prepared fo’ dat 808 doe.

18. The Indien – Done
This band, The Indien, came to me out of absolutely thin air, I’m convinced. The EP from which this song, “Done” comes from was entirely recorded in Köln, Germany, which is interesting considering the American classic alternative rock feel it has. Anyone else getting those Kill Bill vibes? I love it.

19. Leon Bridges – Lisa Sawyer
So, Leon Bridges has been blowing up faster than any other artist out there I’m sure. Just a few months ago Bridges posted his first few songs to Soundcloud, and then fast forward to today, and he’s walking out of SXSW with the hearts of every single music journalist in the nation in his pocket. But truth be told, he deserves it. This guy has a one-of-a-kind sound. As for this song, take your sweetheart up on the hilly side of White Rock Lake and blast “Lisa Sawyer” while you two sip champagne and two step as the sun sets in the background. You can thank me later.

20. Orelha Negra – M.I.R.I.A.M.
Again, another artist I know close to nothing about. Actually, pretty much nothing on this one. However, this vintage, slowed down track is perfect to wrap things up with for this edition of songs you need to know. So melt into this track, and let it take you away, maybe even back to the beginning so you can listen to the whole playlist again… 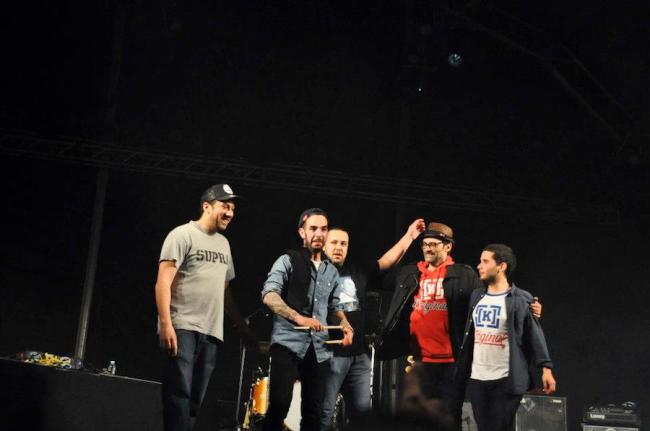 Thanks for tuning it!