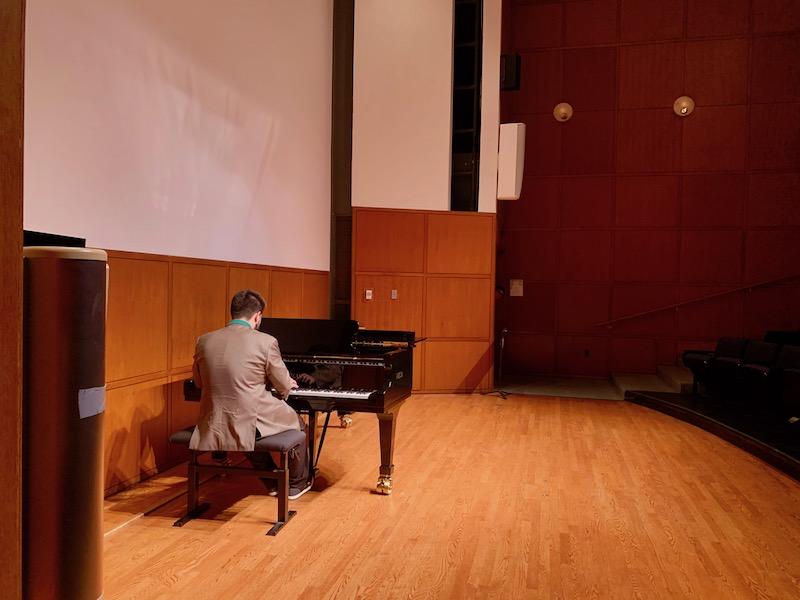 SMU composers and performers pushed their creative talent by writing and rehearsing original musical pieces under a 24-hour time limit for SYZYGY’s 24-Hour Concert in the Meadows School on Saturday evening.

“I’m very gratified that so many students are up for the challenge,” Dr. Harder said. “Especially the performers I think too, who are willing to engage and willing to, you know, try something new and literally learn something that’s super super new knowing that there’s going to be an audience here in 24 hours.”

Dr. Harder first brought 24-Hour Concert, or 24HC, to SMU in 2016. This year’s performance featured eight composers and 21 players, more artists than any other 24HC. Student composers randomly pulled performer and instrument names on 7:30 p.m. Friday, then wrote a piece until 7:30 a.m. the next morning for their performers, who would practice until the 7:30 p.m. concert that same Saturday evening.

“Some people got their pieces this morning. I didn’t get my specific piece until 3 p.m.,” tuba player Ryan Ehigiator said. “Some people had varying degrees of success based on how early or how late they picked up their pieces, but it’s all part of the process. It makes it really fun. It keeps it interesting.”

The SYZYGY Ensemble engages with audiences by using contemporary music to address current social issues. One of the returning composers, senior composition major Allie Simpkins, produced two pieces over the 12-hour deadline. According to Simpkins, her second piece, “don’t call me cute,” reflected her growth as a composer and the reductive interpretations imposed onto the work of women composers.

“Composing is difficult. It’s simultaneously the best part and the hardest part,” Simpkins said. “In my case, I stay up all night by myself, alone with my thoughts. And this particular year, I chose to be very vulnerable with my music and talk about things that are hard for me, and finding a way to express that was also very challenging. But it’s ultimately so satisfying when you go through it all, and it just comes together.”

The works created at 24HC have had enduring impacts for the students both personally and in their musical careers. Adjunct professor Alex Shawver graduated from SMU last spring after performing one of his 24HC pieces at his master’s recital. This year, he returned as a performer after having first composed at 24HC in 2016.

“It was the first time I had heard my notes being played by real people that wasn’t me,” Shawver said of his first 24HC. “And it was just bizarre to think, ‘these didn’t exist yesterday,’ and they just came out and now they’re there. It felt like fantasy.”