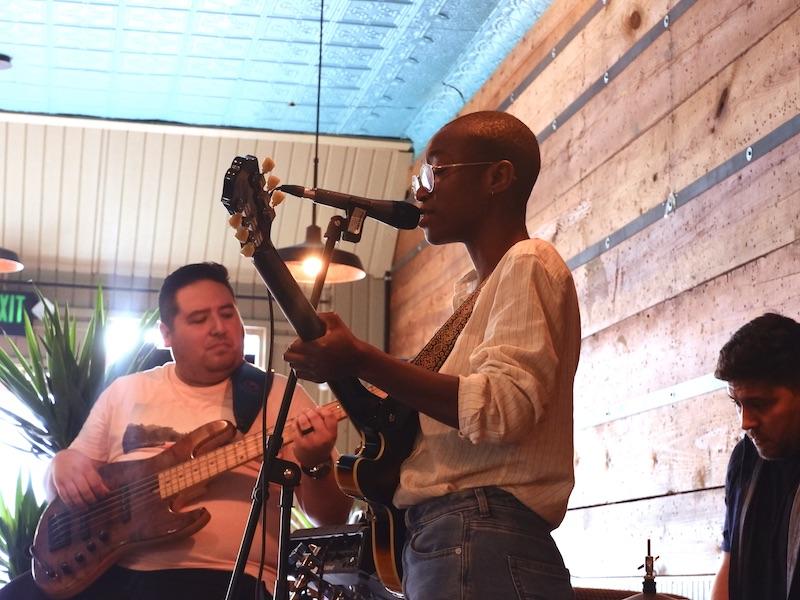 Perhaps, playing along that things aren’t so, just in my head.

Cause racing towards the sky, is just a way to keep

My mind away from the potholes and the drains

Even as masks dampened their voices and hid their smiles, the audience’s response to Temi George was clear. Some swayed with closed eyes, drinking in the music that floated towards them on the coffee-scented air. Others fixed silently on George, their feelings betrayed by a steady tapping of the feet or a languid back-and-forth nod to the rhythm of the bass.

Within her two-hour performance at 1418 Coffee House, George was able to raise over $600 for the Innocence Project, a nonprofit dedicated to exonerating the wrongly convicted and advocating for criminal justice reform.

“It’s a moment unlike any other in recent times where the whole world, at least the entire United States, is staring directly at a huge issue that we’ve had,” George said. “With any platform that I have, I want to be able to speak to the things I know that people need to hear…I feel [people] are more receptive to these things whenever you’re connecting with them at a common point, and that common point being music for me.”

George’s June 27 performance at 1418 Coffee House wove together many previously distant parts of herself: poetry, a growing sense of activism, and even her connection to Dallas. However, much of what defines George’s art today, she only discovered during a more than two-year hiatus from music. After arriving to SMU as a music student in 2017, George began to feel burnt out from the pressure to sustain momentum in her burgeoning musical career.

“It wasn’t coming from a place of love or joy anymore, it felt like a necessity…And that’s okay,” George recalled. “I needed the break, and I’m glad I took it because coming back to music now, I feel a lot more respect for it; I understand my limits, I understand how I should and shouldn’t feel when I’m playing, and also I got to explore art forms in mediums I enjoy other than music.”

George switched her major to English and allowed herself the freedom to explore more artists and styles as a listener rather than a musician. Folk influences, like Bon Iver, Sufjan Stevens and Nick Drake, have given way to more R&B and neo-soul artists like Emily King, Solange and Tom Misch. As she began exploring poetry and essays, her lyrics, once marked by ruminating and uncertainty, have developed more “body”.

Is it you or the city?

Could’ve kissed you there and then.

Summer’s coming to a head.

Rolled us in their cigarettes.

I’m just placing blame where blame is due —

Fragile feet around the Louvre.

Lyrics to Louvre by Temi George

“I was just trying to find my place in the world…how I fit with myself and who I was becoming, determining my own ideologies and viewpoints about the world and people,” George said. “As I’ve grown older, obviously those things have sort of started to solidify…I guess I’ve sort of concretized my thinking lately, rather than having it be very abstract… it’s more so centered and grounded in what’s real, right now. What I’m actually experiencing in relation to people.”

Her two years away from music confronted George with plenty of new people and experiences that informed her current awareness of identity and profoundly shaped her relationship with societal ills.

After neo-Nazis hung racist and homophobic fliers around SMU’s campus in 2017, George remembers being chased by two masked men in a maintenance vehicle while she rode her bike back to her dorm.

“I biked as fast as I could back to Armstrong and just threw my bike on the ground, didn’t even lock it up, ran up to my room, didn’t think to call SMU PD because my faith was that low in SMU PD, and it still is, to an extent,” she said.

In another instance, George says she was threatened and harassed by a graduated SMU student after he demanded that George return a camera he had previously sold to her. After going to the Dean of Students Office to resolve the problem, she said she was essentially brushed off despite numerous unwarranted encounters.

George can list a slew of other less overtly threatening moments where she realized there was a breach between her own sense of self and the perception others had of her.

Moments like when, as an Orientation Leader for the incoming freshman class, George remembers feeling “like a circus animal” knowing that she would have to act a certain way or be thought of as “ghetto.” Or feeling like “an outlier” who, even after founding a magazine and working to be recognized as a student and a leader, was always left feeling like it wasn’t enough.

Despite her experiences, George believes they pale in comparison to those of others. And those experiences, at SMU and beyond, need to be heard. Her return to music is marked by this new awareness.

“I can’t see myself shutting up about this stuff – like at all. I’m going to keep protesting, like I’m protesting tomorrow, and the next day, the next week,” she said. “Now I know there’s so much more to be said than I previously thought… given how much we made tonight and like the great response we got, people are receptive to hearing that.”

“I can’t see myself shutting up about this stuff – like at all. I’m going to keep protesting, like I’m protesting tomorrow, and the next day, the next week.”

George’s current work is a clear blend of the personal and the political. Her stories and thoughts are significant because of the way they can connect to others. It’s important to George that her message doesn’t come across as “preachy,” but rather as an inclusive dialogue with her audience.

“I definitely know that music will continue to be a part of my activism as I move forward… my lyrics, my poetry, everything about how I approach art, music, my life is going to be about activism and spreading the good word,” she laughed half-jokingly.

George admits that she finds it weird to distinguish herself as an activist, in part because she feels activism is a role intrinsic to a democracy like the United States.

“Michael Moore, he’s kind of controversial, but he had this great quote,” George said. “No one should distinguish themselves especially as an activist because we all should be activists if we’re doing democracy correctly…It’s like, I’m just fighting for my life and the lives of others.“

George will continue exploring the connection between the personal and the political as she begins a new chapter in her musical and personal journey in New York City at Barnard College, where she is transferring this fall.

“I’ll definitely be influenced by the musicianship, the things I’m thinking, the life I’m living over there. But regardless of which way I bend, musically, I will never be moved off base for myself. I have that understanding of what music means to me, fundamentally,” George explained. “But I think it’s more so exciting for me because I understand this is about me at the end of the day…what I’m doing is about me and no one can take that.”

I could be anything but who I am today.

At the least I’m infatuated with the wide array

Of possible change that waits for me on my way