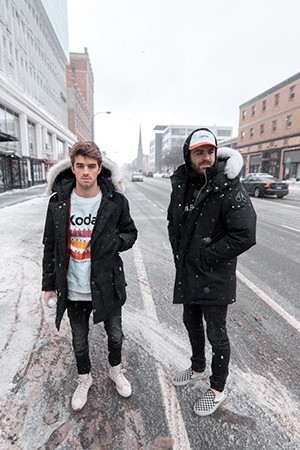 Since 2014, The Chainsmokers have dominated the airwaves on their way to becoming one of the biggest EDM groups in the world. The duo has put together some of the biggest hits of the last few years, including “Roses,” “Kanye” and “Closer.”

Now, with expectations as high as they have ever been, the duo released its first full studio album “Memories … Do Not Open.” Unfortunately, the title is a little too spot on.

“Memories … Do Not Open” is a complete disappointment. While The Chainsmokers have always had a propensity for making pretty bland EDM, they usually find a way to inject some life into their music. It can be counted on to be catchy, fun and a perfectly designed party anthem.What has been their bread and butter has now become their Achilles heel. The method of creating a synthy pop ballad with lyrics just relatable enough to convince every teenager that this song is about them has allowed The Chainsmokers to become who they are.

The album opens with one of the previously released single “The One,” a decent tune stripped down enough to give an accurate impression of where the album is heading. The message it conveys is that “Memories … Do Not Open” is a personal look into the psyche of a songwriter filled with emotional moments, bared tracks and simpler acoustic sounds. That isn’t necessarily wrong, but the problem is that it immediately becomes incredibly dull in the very next song. The run of the next three songs is so cliché and boring that it’s hard to tell that the songs are even changing.

The only noticeable difference is in the following track “Something Just Like This” due to its Coldplay feature. Chris Martin is a welcome addition to the track and his vocal style fits very smoothly over The Chainsmokers’ beats. The song is one of the few that deserve another listen and thankfully it was also released as a single so it doesn’t have to be weighed down with the rest of the album.

Then the track list reverts to its bland, cookie-cutter style, and the rest of the tracks rumble along without anything standing out. Finally toward the end of the album, a few pieces worth listening to, namely the collaboration with Jhene Aiko in “Wake Up Alone.” It has a more interesting musical accompaniment than the rest of the songs and Aiko does a great job with her vocals.

While there are a few songs worth listening to, the album suffers from the same problems throughout. The supposed emotional insight the album advertises is more of a misguided attempt at appealing to young adults everywhere who are looking for a good song to listen to while they stare out the window into the rain and contemplate life while sitting in the backseat because they can’t drive a car yet. What is supposed to be an in-depth speaking from the heart comes across as another classic, tortured-artist syndrome with no real resonance.

Every song is interchangeable with the next and there is no musical experimentation or innovation. The closest thing to any attempt at broadening their range is the deeper mixing on “It Won’t Kill Ya,” but even that only lasts for a few seconds.

It almost seems like The Chainsmokers are afraid of switching their style in the smallest way and upsetting any part of their fan base, which is annoying because the two have proven they possess the ability to create a unique sound. Instead, they prefer their recycled and processed method because, if it works, what’s the point in trying anything new?