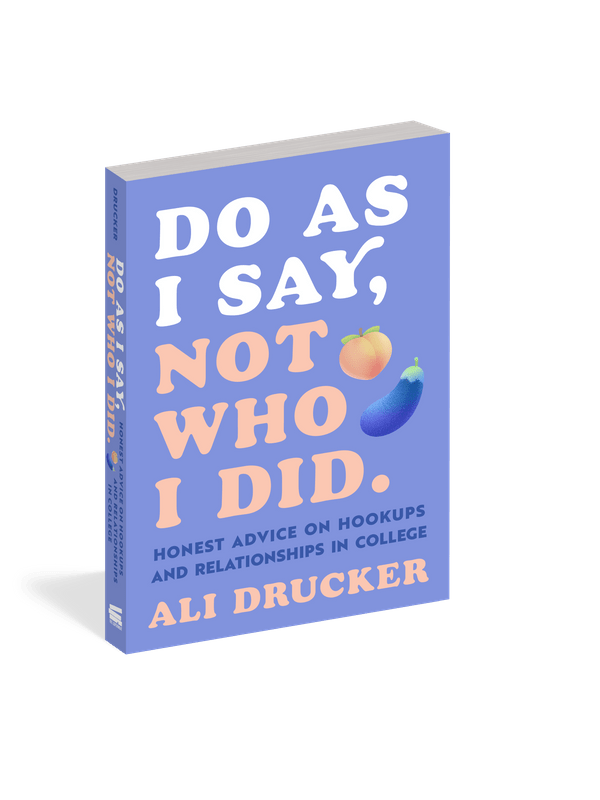 Ali Drucker’s new book, “Do As I Say, Not Who I Did,” is not subtle, delicate, or laced in metaphor –and it’s exactly the sex education college students need.

The aptly named title sets the tone for the playfully instructional guide to hookups and relationships in college, specifically as they relate to those identifying as female. Drucker drives the book with her candid personal experiences, aided by facts from experts in the field of sex and relationships and perspectives from some 40 real college students.

“Do As I Say, Not Who I Did” doesn’t take itself too seriously, but it recognizes the salience of its subject matter with urgency and insistence. When addressing consent, for example: “It’s a little ironic that the most important word when it comes to healthy sex is the least sexy-sounding, like you’re begrudgingly signing your rights away to have some unpleasant medical procedure performed.” Drucker consistently identifies myths and harmful beliefs about sex often held by young women with non-judgmental humor: “[I]nstead of throwing off the twin extra-long sheets and storming out of his dorm, I stayed and listened to him explain why his lack of an erection was my fault.”

The success in which Drucker rides the line of unbridled self-deprecation, and uninhibited self-compassion, is crucial when considering the book’s goal of teaching women to unlearn oppressive sexual systems instilled by patriarchal norms. “Lauren mused to me that she was always taught to be a good hostess. But if you take one thing away from my story and hers, let it be this: No one has the right to make you feel like sex is inevitable or owed. Your body is not a cocktail party, and you are not the hostess.” The book looks at not just the provocative and explicit parts of sex but also the magnanimous implicit ramifications of female agency one discovers in oneself when existing on a college campus. “I wanted to feel attractive above all else, and I didn’t place a premium on feeling heard or having my needs met.”

Perhaps one of the book’s most sobering and unquestionably educational aspects is the research Drucker cites from experts in the field of sex, sexual assault, and relationship health. “As many as 21 percent of women experience sexual pain during intercourse, and yet some- thing that hurts 1 out of 5 women is still considered to be the default form of straight sex.” The book interjects her compassionate commentary between quotes from conversations with the likes of research chairs in sexual violence and sex experts. Drucker’s narrative voice deconstructs grim statistics, offering a realistic and holistic perspective on sexual activity without slipping into fearmongering. “Ultimately, by deconstructing the tapestry of facts and opinions that make up your values, you may be able to rewrite them into a set of conduct that feels authentic to you.”

Drucker’s inclusion of anecdotes from real college students promotes an additional layer of legitimacy to the book’s merit, specifically relating to sections that Drucker has limited personal experience with (such as LGBTQ+ dating). These sections are just as comprehensive, informative, and thoughtful as the chapters that revolve more heavily around Drucker’s personal experiences. “One of the biggest misconceptions Katz-Wise sees is the assumption that gender identity and sexual orientation are stable across time for everybody.” Drucker’s emphasis on amplifying her interviewees removes the risk of speaking for the LGBTQ+ community. “‘I literally am what I say I am. There’s so little trust in college women about their sexuality,’ Alejandra says.”

Crucially, Drucker’s book is as she advertises, and more. It’s compelling, funny, and unflinchingly educational while delivering a stream of unconditional compassion for the reader. While navigating the treacherous waters of mental and sexual health in college, there are few things young women need more than to hear someone say, “[Y]ou are entitled to 100 percent of your intimate desires and beholden to no one else’s.”