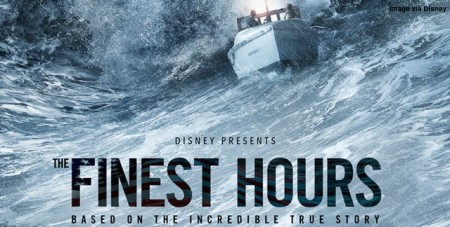 Craig Gillespie’s latest venture is not quite as aptly named as one would hope. “The Finest Hours” is a film that, while not the worst movie of the year, definitely isn’t one of the best. Based on a true story, the film follows U.S. Coast Guardsman Bernie Webber and his crew as they attempt to rescue a destroyed ship in the middle of one of the worst storms in history. The film takes place in 1952 and stars Chris Pine, Casey Affleck and Holliday Grainger.

While it seems on the surface that the film is focused on the daring rescue of the downed oil tankers, it instead mainly follows the love story between Webber and his girlfriend Miriam. Their love story takes place over a strangely paced time period in which they meet, go on a pair of dates, and then decide to get married, all of which happens right before Webber dashes off into the biggest storm of the century without telling her. The confusion of their relationship dynamic wouldn’t be as much of an issue if it weren’t the attempted focal point of the film. The movie would have a much more satisfying premise if it had focused on the rescue and used the relationship as motivation instead of the other way around.

While the film’s main problem was its lack of story development, there were definitely other issues as well. In a period piece like this the performances are typically what can save the film but instead they made it worse. Chris Pine seemed to be the only one interested in making the film a worthwhile production. The rest of the cast seemed to be doing their best to be caricatures with silly accents instead of the people they were supposed to be portraying.

As a whole the film had a lot of key elements that
could have made it successful. The story had potential, the actors have enough
talent and the time period in which it was set is one that often lends
itself to an interesting film. Unfortunately all of these pieces were not
enough to complete the puzzle. The film could have been the finest hours for
Gillespie and his company, but instead it was anything but.