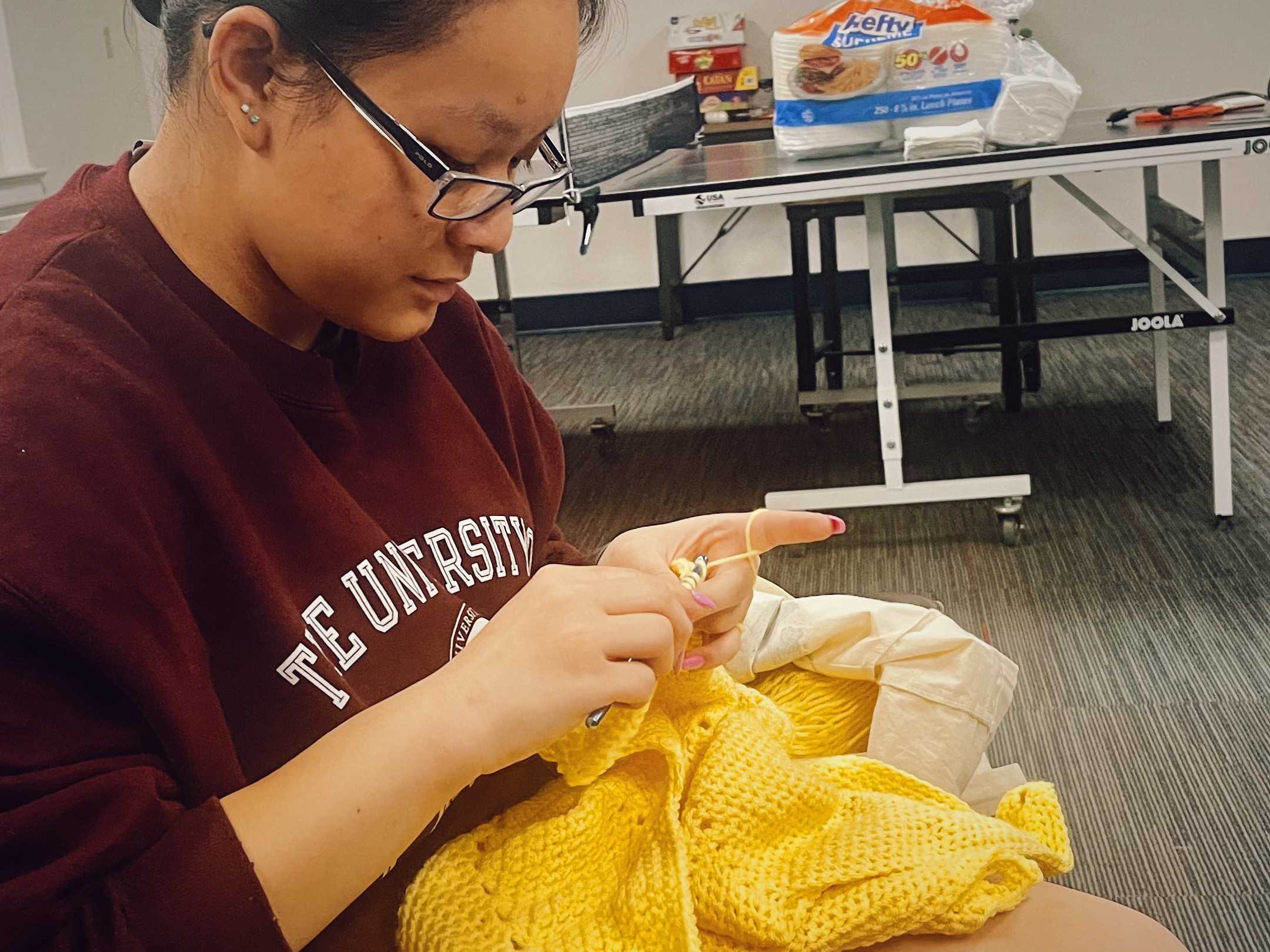 Stitch by stitch, the needle glides through the yellow yarn in a satisfying rhythm of hooking, looping, and poking. After starting with just a tiny circle at the beginning, student Tricia Tsang progresses row by row into an intricate star. To expand the star, she adds a new row along the entire perimeter, and gradually she will complete it.

She lets her mind wander and her hands go on autopilot, never missing a stitch while she focuses on whatever she needs to. Eventually, she gets excited about the future finished product and brings her attention back to the star.

She stretches her legs out and shows how far she has come.

She presses her blanket flat against her lap and tries to fix where the stitching tension is off. She notes that she still has some learning to do to hone the craft. She wishes she knew more people who crochet so she could get tips. She wants more people to join in the community.

Waiting to host Pizza and a Movie, she sits on the Smith Hall rec room’s worn leather couch. The room is taken up mainly by a ping pong table; that is where the pizza will go. An ice machine is buzzing while she waits to drum up a conversation with someone in hopes that they will have a project to mindlessly work at, too. She wants to start a club on campus but fears obstacles like lack of interest or, worse, judgment from other students.

For now, she taught her roommate to crochet to feel less lonely while she crochets. Tsang acknowledges that there is a large community online on TikTok but wishes for more of a presence on campus.

Tsang, 20, was born and raised in Houston, Texas, but she spent many summers visiting family in Hong Kong, where she feels she really “grew up.” She said she could be found with a paintbrush or other craft in her hand before she could walk. She loved using her creativity to bring people together and celebrate her community.

For her high school graduation, she decided to bake cookies for all the other graduates and wrote personal notes to everyone. They told her her cookies were good enough to sell.

“The cookies were my favorite creative project,” Tsang said. “I felt better about COVID changing my senior year because I was still able to connect with the people who had been around all four years”

Tsang is no stranger to this kind of connection.

Tsang and her roommate, Khari Bing, spend a lot of time together in their cozy dorm. Bing would watch Tsang crochet and noticed the increasing speed that she was able to pop out a new product.

Though they both enjoy each other’s company while crocheting away, they still feel like a more significant piece is missing: a local community.

“I wouldn’t want someone to come into this organization, and they want to learn a new craft or hobby, they want a safe space for them to be able to do something that they love. Then they hear people are talking badly about them … simply because they’re doing a hobby that’s associated [with] people who are outside of our age group,” Tsang said.

Allison Martin, the founder of one of SMU’s newest campus organizations, Disability Connections and Empowerment, knows exactly how Tsang feels. The biggest challenge she faced when they formed in Fall 2021 continues to face them: finding members.

“Eventually, we really just have come to the conclusion that it doesn’t matter how many people are in it.” Martin said. “ It just matters that it’s there for people when they need it.”

Martin’s philosophy also drives Tsang and Bing to want to create their own space for the others on campus who share the love of crocheting and are probably feeling lonely, too. Bing wants a collaborative experience.

“Just to learn how other people approach crocheting, and it might be a little better than reading it online because you can ask them questions you can’t really post on a forum and then wait three days for a reply or something like that,” Bing said.

Until Tsang can find enough interested people to be able to propose a new club to the university, she remains primarily alone.

Sitting on the worn leather couch, she weaves the golden thread around the star until her fellow R.A. walks into the room.

And just like that, a swarm of tenants follows behind. She puts her project away – for now.