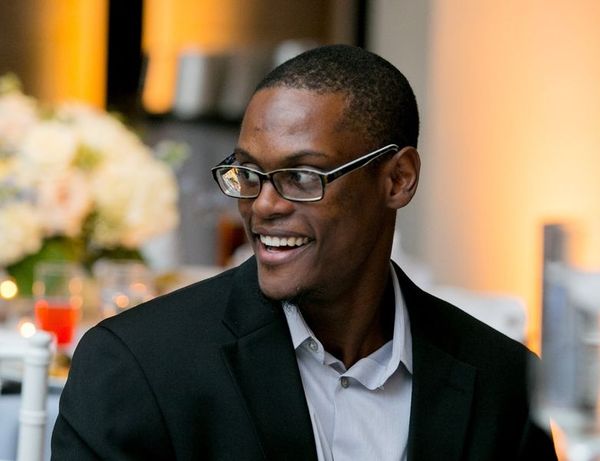 Spencer Adom Roberts is a second-year graduate student pursuing a dual master’s in instrumental music composition and instrumental conducting. He received his undergraduate degree in music education and music composition from SMU. He plans to pursue his doctorate after SMU in the hopes of becoming a college professor.

Born in Indianapolis, Indiana, Roberts moved to Plano, Texas at the end of fourth grade, and has been there ever since.

He dabbled in composition in high school through a music theory class and originally thought he was going to be a music performance major. However, he decided to go the music education route because of its versatility and job opportunities. This is what ultimately brought him to SMU. He knew about SMU’s high job placement rate in the music education department.

At the end of his sophomore year at SMU, he began to amass a small portfolio of music. He hadn’t had lessons yet, but he continued to write because it interested him. He would always bug his friends about it. Eventually, his friends got annoyed enough that they recommended he add composition as a major so he could take classes for it. So, Roberts ended up adding a major in composition his junior year. This helped him get better feedback about what he was already doing and helped him become a better composer overall. Soon, it began to slowly take over his aspirations and goals.

During this time, Roberts discovered that he no longer wanted to be a primary or secondary school teacher because he desired a more challenging environment. When he began student-teaching his senior year, he discovered that the average hours of an assistant band director at a High School can be upwards of 12-hour days. This means you have to love what you do above anything else. Although music is his life, he also values friendships, personal time, and wanting to start a family. This realization helped Roberts know that his passion was really for higher education and composition.

As a jazz musician, Roberts believes that improvisation is the purest form of composition. He believes that his experience with improvisation helped spark his dive into writing. He began on an early version of the composition software, Finale, in his music theory course in high school. He had never seen an interface where he could make music electronically like the compositions that he had been playing, and it excited him. This was combined with the fact that his sophomore year roommate in college was also a composer and they continued to room together through their senior year. Once he got a taste for composition, his passion only continued to grow and it has now become a big part of his life.

When recounting his first musical compositions, Roberts notes that he was mainly just making stuff up with little purpose behind his musical choices. He would just come up with stuff that he thought sounded cool. As he went through his undergraduate musicianship and music theory courses, he gained a greater ability to think coherently through chord structures, progressions, musical ideas, and phrases.

He put it this way:

“I am now making actual sentences or paragraphs, when before I was kind of speaking in broken English if you will. And now I can speak fluently. If I have something to say, I know how to say it or I know other ways of getting there. Earlier compositions were just feeling out musical vocabulary and now I’m at a point to where I have the tools and skills I need and can use at a higher level of efficiency”

It’s about learning the right way to say something.

Recently, Roberts has continued to grow his personal portfolio with his piece, “American Octet.” This piece is an octet for strings and winds that consists of 2 string players and 6 wind players. The orchestration and technique are inspired by Igor Stravinsky. Its premise has to do with American politics and his understanding of it over the past five to six years. Thus, it was named “American Octet.”

“It just so happened that I had a good idea, which you can’t get mad at. Cuz, not all your ideas are great… I’m happy with how it turned out so far,” Roberts said.

This project is especially important to Roberts because there is an almost unspoken rule that in order to be a seasoned composer, you have to be over 40 years old. Composition takes a long time to master and, at 25 years old, Roberts feels the pressure of having to make a living for himself and finding ways to break into the music world.

He believes that the projects he’s been working on this semester have truly been for himself. This means that he is saying what he feels he needs to say and they are not created just for the sake of having something out there. He has begun to worry less about how people will perceive his work but rather what he wants to say through it. That is what he is most proud of with this piece.

He is proud of his growth as an artist and says, “I don’t necessarily take into account what people will think when I write them and that’s kind of, to me, a sign of my artistic maturity… just letting it be what it is and letting it exist once it leaves my hands and hits the paper”

This octet is meant to say something bold that Roberts truly believes in on a topic that is very touchy. But he is not worried. Rather, he is actually proud that he is saying it; something he couldn’t do about a year or so ago.

“Each movement has foreground material that it was derived from a date,” Roberts said.

The first movement was derived from the birth of our country on July 4th, 1776. Roberts assigned pitches based on the numbers 07041776. This is called a serial technique. It was created by the New German School in the early 20th century when people wanted to serialize pitches and make music a little bit more mathematical. This was at the end of the Romantic period when people naturally wanted to change things and go in different directions. At this time, Germany was also at the forefront of Western music. They were the golden standard of anything having to do with subsections and all-encompassing work. Roberts used this tactic to determine which pitches were going to make the foreground phrases in each movement.

The second movement was derived from the inauguration date of Donald Trump, January 20th, 2017.

The third movement was derived from the inauguration date of Joe Biden on January 20th, 2021.

All of this material is interspersed with various iterations of the original ideas. Roberts plays around with various other American ideals that include individuality. This is very important to Roberts especially since he claims to be creating something with an influence from Stravinsky. He uses Stravinsky as a reference for his orchestration technique but the way that he expresses his ideas for each of the dates in history is still a very individual approach that is distinct from the German approach. He wanted to spin a traditional European idea to make it American.

Roberts summarizes it by saying it is, “American history in an American approach to something that is usually considered a European idea.”

This piece took about a month to compose with two to three weeks of edits to get it to where it is today. As soon as he wrote his composition, he reached out to his peers that he knew could play the parts. He sent them each the piece and was lucky enough to have friends that were willing to help him bring his composition to life.

Although Roberts is proud of his piece, there are some things he probably would have done a little differently if he wouldn’t have been impacted by COVID-19. Due to the protocols put in place by SMU Meadows School of the Arts, he knew he couldn’t write any pieces for large ensembles. So, he decided on a chamber piece.

Aside from this, COVID-19 has also impacted Roberts due to the lack of available gigs, smaller ensembles, decreased audience size, and lack of ticket sales. As a wind player especially, there are fewer opportunities to play, due to the nature of the virus. Additionally, the pandemic has also put a lot of pressure on the economy, meaning there is less space for “expendable” things like the arts.

Roberts even noted that a number of his friends in the arts have completely switched careers due to lack of opportunities over the past year. Several students are being pushed through schools but graduating with no opportunities. Careers that are already competitive are now twice as competitive as before. There are now two generations of graduates who are on the same playing field. But Roberts continues to push on and looks forward to new opportunities in the future.

Rehearsals have begun for “American octet” and it will be debuted this Saturday, April 24th, 2021 at 7:30 PM for SMU’s Emerging Sounds Concert.

The Emerging Sounds Concert happens every semester and is hosted by the SMU Meadows School of the Arts Composition Department. It is specifically designed to give composition students from the undergraduate program all the way up to the graduate level at least one experience to have their Music performed. It is mostly run by the students in the composition department with help from professors.

Beyond this concert, Roberts is working on his newest piece. It is a songwriting project that is one of his first personal recorded songs where he is actually singing something. It has been a challenge for him to focus on his voice now but he is very excited to see it all come together. He feels it is making him a better musician and is looking forward to releasing it and sharing it with someone special very soon.

To listen to Roberts other works visit his website here