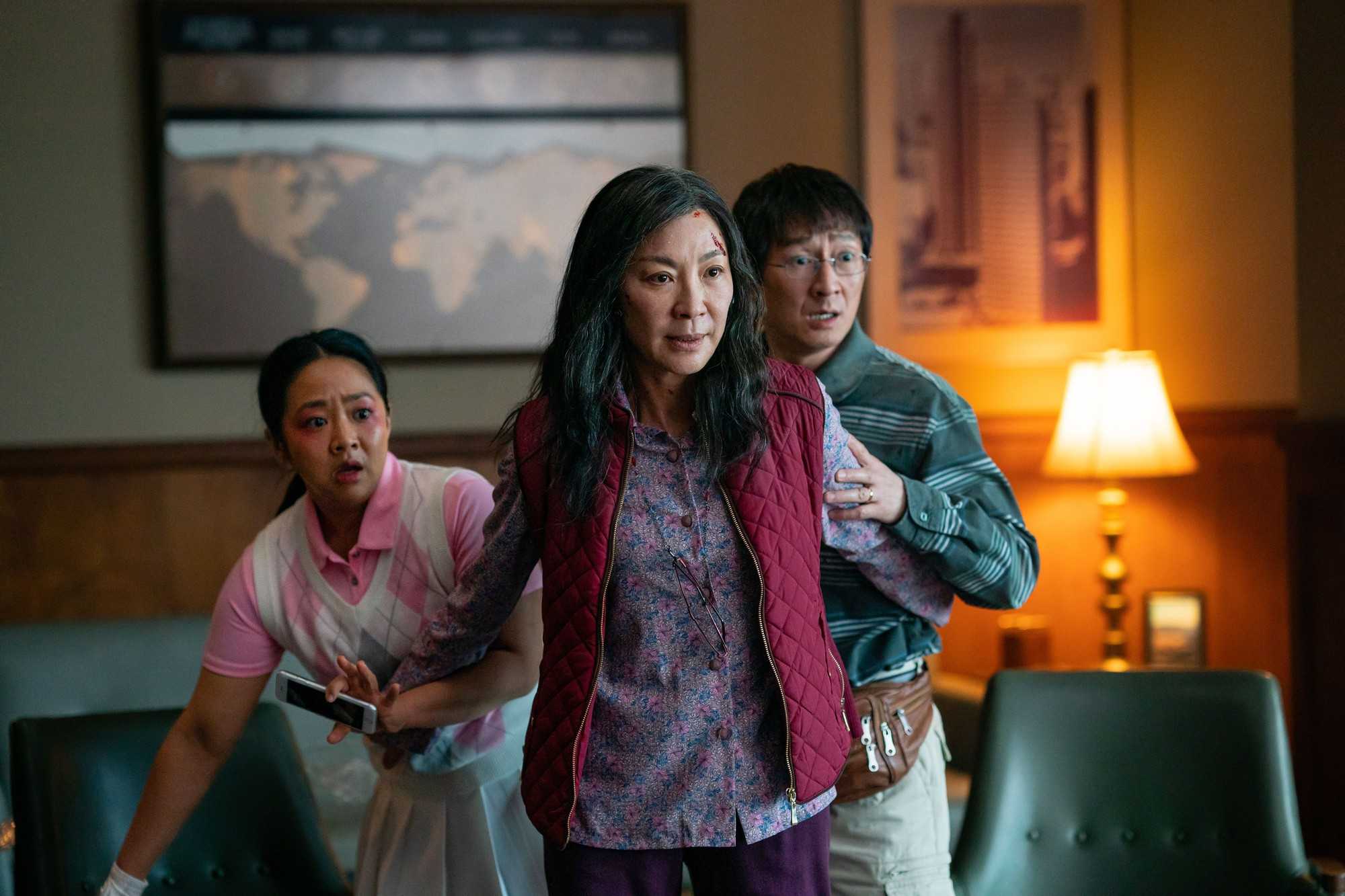 How do you make a story about a mother doing her taxes interesting? All you need to do is sprinkle in the idea of a multiverse of infinite realities, introduce a terrifying villain who can samba you to death, and have the extraordinary actress Michelle Yeoh as your star. Together these elements create the wild ride that is “Everything, Everywhere, All at Once.”

The movie follows Evelyn, the struggling owner of a laundromat and the key to saving not just our universe but the entire multiverse. Evelyn is in the middle of getting audited, her husband wants a divorce, and her daughter barely calls, but on a trip to the IRS she discovers she can connect to and share the knowledge of any of her alternate selves. Already this explanation is confusing and weird but the movie is so much weirder.

The confusing mechanics of the multiverse are treated as a joke and the audience really only gets one simple explanation, technology. All Evelyn has to do to gain skills like martial arts or opera singing is to do something really weird to herself like chug a two liter bottle of orange soda. To spare myself and you this is where I will stop trying to explain the movie. Just trust me you need to see it and you will understand everything.

Michelle Yeoh stars as the confused and depressed Evelyn Wang. Her husband Waymond, is played by Ke Huy Quan who hasn’t acted in 20 years. You may know Quan as the lovable Short Round from “Indiana Jones and the Temple of Doom” or Data in “The Goonies.” Quan’s return to acting is sure to be met with open arms as it is tough not to fall in love with his goofball portrayal of Waymond. Stephanie Hsu plays Evelyn’s daughter Joy and James Hong plays Evelyn’s dad. Finally, Jaime Lee Curtis is outrageously hilarious as the villainous IRS agent, Ms. Deirdre.

One of the standout aspects of the film is its choreography. The fight sequences are a clear homage to the kung fu films of the 70s and pretty heavily inspired by Jackie Chan. At one point Quan fights off a group of security guards with only a fanny pack in a scene that will play in my mind forever. Yeoh also gets in on the action kicking, punching, and even spinning bad guys like signs. There is also a fair share of dancing in the film that is just as effective at taking down enemies as the martial arts is.

With a film that takes on the multiverse there is bound to be a plethora of beautiful visuals and “Everything, Everywhere, All at Once” does not disappoint. With infinite possibilities the film explores every different kind of art style you can think of, each one a stunning explosion of color. There is one scene in the movie where they flip through the universes of the multiverse at blinding speed so if you are prone to seizures you may want to sit this film out.

One of the goals of the film is to elicit emotion within its audience and “Everything, Everywhere, All At Once” touches upon just about all of them. The film dives head first into the absurdity of what it would mean if there were infinite universes of infinite possibilities. Like for example a world where we developed hot dogs for fingers. This absurdity gives the film a unique sense of humor but it is the end of the film that is the real rollercoaster of emotions. In the last 30 minutes the movie touches upon philosophical concepts like life and family creating moments that will make you laugh, cry, and want to call your parents.

To call “Everything, Everywhere, All At Once” a movie feels like a disservice because it feels more like an experience. I know we are only four months into the new year but I think this film has already secured a seat in the nominations for best picture at next year’s Oscars. If it doesn’t get a nomination then the Academy is truly lost.

“Everything, Everywhere, All At Once” is one of the best movies you will ever see. It is a movie every film student dreams of making and it hits theaters on Apr. 8.