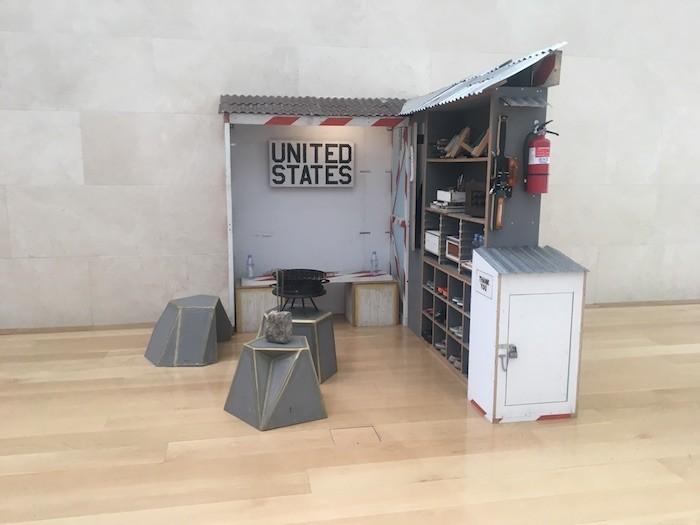 Tom Sachs’ latest exhibition differs from the typical at the Nasher Sculpture Center. His gritty oeuvre, contrasted against the Nasher’s cast sculptural works by Matisse, Picasso or Rodin, seems to act as a foil to the works the Nasher has become known for. In fact, Sachs’ works seem almost silly in comparison.

While the rest of the museum may seem like a museum, Sachs’ exhibition feels more like a playground. In his exhibition “Tom Sachs: Tea Ceremony,” the artist takes the formal, traditional practice of chanoyu, or a Japanese tea ceremony, and turns it into a frivolous experiment.

The koi pond is replaced with a large, gray plywood pool. Tea bowls are hand-formed and painted with the NASA logo. The kimono and tabi (traditional footwear) are instead Nike-branded jackets and tennis shoes. All at once, Sachs’ exhibition feels like a nod to the sacred convention, a look to a hyper-focused future and simultaneously an acceptance of ‘70s nostalgia.

A traditional ceremony goes as follows: once guests are ready, they purify themselves from a stone basin. Then, they crawl in the tea house through sliding doors as the host begins his or her ritualistic process of cleaning each utensil. After that, the more formal portion of making and drinking the tea begins.

The typical tea ceremony takes years to learn, and even longer to perform, Sachs says. For those unfamiliar with the process, it can be easy to giggle at Sachs’ serving of the “brown wave” of peanut butter smeared on a Ritz cracker, or the “sun at midnight” (an Oreo) — a strict departure from Japanese culture that could cause purists to balk.

It’s easy to accuse Sachs, a New Yorker of Jewish heritage, of culturally appropriating Japanese practice. But his work manages to transcend that of a rip-off artist — Sachs himself studied the ceremony for years before undertaking his own work.

While Sachs makes it clear he respects the tradition, his exhibition also carries his tongue-in-cheek humor. His humor, while a bit awkward and sometimes off-putting, is evident throughout the gallery — and some of it manages to stick.

That respect also comes with “heavy doses of disrespect,” as he told critic Michael Granberry.

“Part of respect is disrespect. I love the tea ceremony but I’m also critical of it,” he said.

But what does that mean, coming from an outsider? Is the tea ceremony really something Sachs has the ability to criticize? Somehow, he manages to make the ceremony critical of his own culture, as well.

Despite his attacks on consumerism and materialism, Sachs’ work is utterly material.

In a collaboration with Nike, the artist’s Mars shoes became coveted by sneakerheads, which Sachs seemed to detest.

“We all die alone, and we die without our possessions, including our sneaker collection,” he told Vanity Fair.

Then why, if he abhors commercialism, would he create a product that is entirely commercial in the first place? If it’s merely to be ironic, the irony is lost.

Even more, when Sachs realized he could produce crude-but-functional zip guns, akin to those in his exhibit, he sold them to a New York City gun buyback program for $300 apiece. If that’s not selling out, I don’t know what is.

Still, Sachs’ work feels unsettling. He invites two guests at a time to encounter the ceremony. His rules vary in degree of difficulty to follow, and he admits that it’s okay to break them. Sachs even laughs along with guests in moments of confusion, as he gently guides them on to the next step.

For such a self-described jokester who is often asked if he is “the kid who never grew up,” Sachs takes his work to an extreme level of seriousness. His creations appear frivolous, but aren’t parody. At the end of the day, all the details are there. And for some reason, the attention to detail doesn’t garner the appreciation it desires.

The bricoleur, who uses a bronze Yoda head in place of a chrysanthemum, a lobster made of welded wrenches and a bonsai constructed of tampon applicators, Q-tips and toilet paper rolls, believes his works serve a purpose larger than their mere existence.

“There might as well be a sign on it saying, ‘This doesn’t need anyone to explain it,’” Sachs said in an interview with artist Jon Kessler. But it’s not quite clear what the purpose of Sachs’ work is until explicitly stated. To provide more context, Sachs even released an accompanying guide, “Tea Ceremony Manual.”

The lobster? “To communicate long life,” Sachs told Artnet. The Yoda head? A representation of Eastern philosophy in America, according the the exhibition’s curator, Dakin Hart.

And if Yoda is an all-encompassing symbol of America’s flippant understanding of Eastern culture, Sachs’ repetitious invoking of the icon shows he knows he gets the joke, too. But the question remains, does his audience get it?