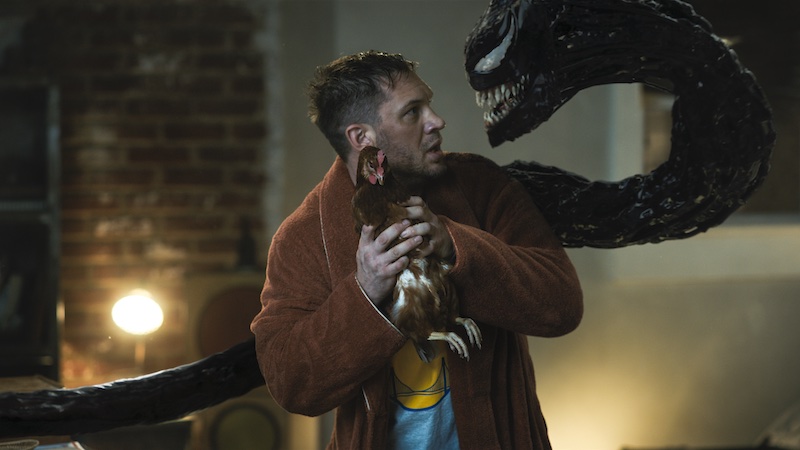 “Venom: Let There Be Carnage” was released on October 1 to a record breaking $90 million opening weekend. In this follow up to 2018’s “Venom”, the disgruntled reporter Eddie Brock returns. After bonding with alien symbiote Venom in the first film, Eddie struggles to coexist with the alien inside of him while investigating the serial killer Cletus Kasady. But things take a turn for the worse when Kasady escapes from prison and carnage ensues.

The film sees the return of Tom Hardy as Eddie Brock and the voice of Venom. Woody Harrelson plays the serial killer Cletus Kasady, and Naomie Harris stars as Kasady’s long lost love, Frances Barrison. Rounding out the cast is Eddie’s ex-fiancée, Anne, played by Michelle Williams. The film is directed by Andy Serkis who is known for playing the roles of Gollum in the “Lord of the Rings” trilogy and voicing Supreme Leader Snoke in the newest “Star Wars” trilogy.

Venom is a dark character: he likes eating people’s brains and ripping off their limbs. Yet “Venom” never goes that violent – possibly in order to maintain a PG-13 rating (PG-13 movies tend to make more money than R rated ones). Instead of letting Venom and another alien symbiote, Carnage, go hog-wild with blood and violence, the film decides to explore the goofy sides of these characters. It is here where this film shines.

The rom-com-esque relationship between Eddie and Venom is another high point. They are set up as a sort of “Odd Couple” and it works – most of the laughs come from their back and forth banter. But what works for Eddie and Venom, flops for Cletus and his symbiote Carnage. Instead of being a psychotic killer, Cletus comes off as a comedic Hannibal Lecter. Half the time he is talking in poems and the other half he is making jokes that don’t quite stick the landing.

The plot of this film is pretty basic. The mystery behind Cletus Kasady gets solved fairly quickly, as do the relationship problems between Venom and Eddie. Really, the first hour of the movie is a build up to a climactic battle between Venom and Carnage in a cathedral. But even that resolves quickly. It may be a result of the fact that the film is only an hour and forty minutes long – which is short for a superhero flick – or because the pacing of this film is like a car speeding down the highway.

This fast film gives way to the real gold nugget of “Venom 2”, the post credits scene. After the credits stop rolling, audience members are treated to one final scene. While superhero film fans are used to the post credit scenes, this extra scene has been deemed one of the best amongst fans even before the movie came out.

Audience members see Eddie in Venom a hotel room, when they are abruptly teleported to a different and much fancier hotel room. All of a sudden, the TV shows a news report about none other than Tom Holland’s Spider-Man. The reason this is so big is because this proves that Venom (originally a Sony property) is now connected to Disney’s Marvel Cinematic Universe. It may even mean Venom will be appearing in the upcoming “Spider-Man: No Way Home”.

The post credit scene deserves a watch especially if you plan on going to see “Spider-Man” in December. But the question is, is it worth sitting through an hour and forty minutes of sub par superhero film?