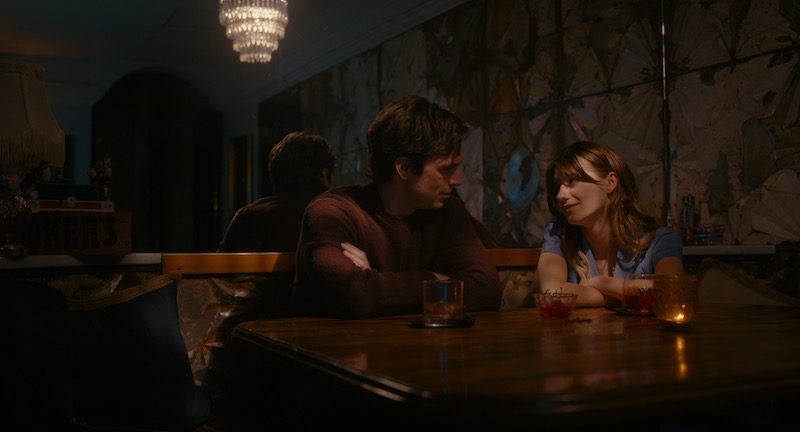 Hulu’s latest comedy thriller starring Sebastian Stan and Daisy Edgar-Jones hit the streaming platform March 4. Written by Lauryn Kahn and directed by Mimi Cave in her directorial debut, the film’s female influence works in its favor as it utilizes dark humor to comment on the reality of rape culture, sexual assault and online dating violence.

The first 33 minutes of the film fit the rom-com bill. Noa (Edgar-Jones) goes on a “horror story” date: Chad tells her she’d look better in a dress and uses his scarf (another red flag, he wears a scarf over a t-shirt) to clean up spilled food. To seal the deal, he calls her a “stuck-up bitch” when she rejects his offer to hook up afterward. It’s absurd, comically bad, but it’s all too real – this is the Tinder experience.

Noa desperately needs a win, which is why she – and we – can’t help but root for her and Steve, the hot, awkwardly charming doctor (Stan) she meets in the produce aisle of the grocery store.

They sleep together, bond over dead parents, and both don’t really know how to dance – it’s a little too perfect. Mollie, Noa’s hyper-intelligent, kick-boxing best friend clocks this – calling it “a little too much like a fantasy” when Noa agrees to go on a trip with Steve.

“That beginning sets the whole tone of the movie,” Stan said. “You have to really believe that Noa and Steve genuinely connect in some way so that you stay throughout it with them.”

And we do buy into the believability of their connection. Stan and Edgar-Jones have great on-screen chemistry, and their respective acting prowess makes us understand why Noa trusts Steve enough to follow him into the ultimate horror movie trap: a cabin with no cell service.

Much to Noa’s (and our) horror, Steve’s no ordinary doctor – he’s a psychopathic surgeon who kidnaps and slowly butchers women to sell their “meat” to the upper echelon of society for consumption.

“There’s a pattern to a lot of those successful serial killers like the Ted Bundy, for example, who presented a certain kind of life and charm,” Stan said. “Bundy would find a way to connect with his victims in a way where he didn’t appear threatening. Steve does the same thing when he asks Noa questions about her family. I think we get taken aback by someone who shows interest in us, but in Steve’s point of view, he’s just asking Noa questions to find out information about her. This interest that he takes in her while revealing certain personal things about himself is all in the world of establishing trust. That’s what the beginning of the movie is about – making Steve look and appear safe.”

Between high-energy sequences of Steve hacking up human flesh to electric 80s music, we get scenes where Mollie realizes something is wrong. Noa’s location is off, and she discovers “Steve” has a wife, kids, and a separate identity. Mollie’s paranoia seems too convenient, but there is nothing but accuracy in the movie’s understanding of the alarm bells that go off in a woman’s head when she sees a friend’s location services aren’t working after a night out.

“Something I loved in the script was this celebration of female friendships in a way that you don’t always see on camera,” Edgar-Jones said. “The true love story is between Mollie and Noa.”

The movie manages to balance comical absurdity with overt and gut-wrenching violence. In a scene where Noa tries to escape, Steve punishes her by cutting off her butt.

The writing is specific and sharp, and the performances are excellent across the board, but the movie isn’t exactly subtle. A tear rolls down Noa’s anesthetic-frozen face while Steve pops in from the left side of the screen to chipperly tell her, “I’m taking your ass!”

Still, the film doesn’t need to be subtle to be good or get its point across. It manages to balance the situation’s comical absurdity with overt and gut-wrenching violence.

“That that sort of plays against expectations – I feel that the movie does start with these romantic comedy tendencies and then halfway through when the rug gets pulled in, it sort of becomes another thing,” Stan said. “But you don’t lose the beginning, and you don’t lose them as characters. You don’t lose their banter or whatever connection or dynamic they had; it almost doesn’t stop being a romantic comedy. At times, it just becomes something entirely different.”

This complicated relationship with emotion tracks across the film’s message about solitude among survivors of sexual violence. One of the most poignant moments in the story is when Noa communicates with Penny, another victim, through the walls of her prison.

Despite the considerable hopelessness, Penny and Noa make light of their situation, even when Noa realizes she’s the only girl who slept with Steve before he kidnapped her.

“One of the things the film exposes is how shared experience enables these women to work together to overcome their situation,” Edgar-Jones said. “I love that, ultimately, they save themselves; they’re not saved. It’s their strength that gets them through, and I just think it’s really important to see that on-screen. We should look after, pull up, and support one another, and not blame or tear each other down.”

In a world where Rotten Tomatoes holds a monopoly over movie reviews, “Fresh” confidently dares reviewers to give the film a rotten score. With a stellar cast, sharp dialogue, and an acute understanding of the nuances of sexual violence, this Hulu thriller is more than its gimmicky pretense will lead you to believe.