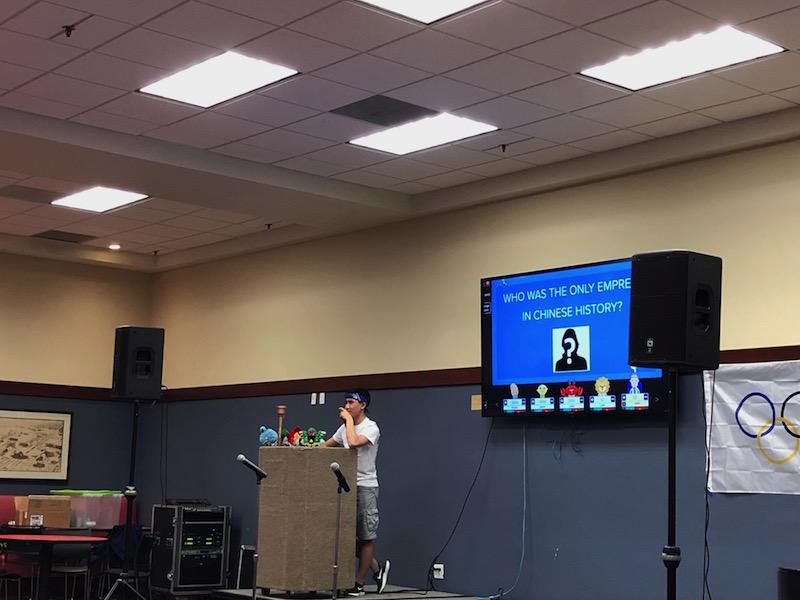 More than 100 students learned about China’s culture through Jeopardy and participated in Olympic-themed games at the China Cup event at Hughes-Trigg on Thursday.

One of the games at China Cup included a relay race. A member of the Chinese Student Association, Megan Sham, called the race the highlight of the event.

“I wasn’t sure if people would actually want to participate in the relay,” Sham said. “But a lot of people really liked that because it was fast-paced and you could get candy in the end.”

Students had to grab candy using chopsticks and run toward their teammates as part of the relay race. SMU student Hannah Sheard said that she felt nauseous while running.

“I ran so much,” Sheard said. “I am eating this Lychee Jelly to get some energy.”

“The reason why we lost is because I am inflexible and I crack under pressure,” Smith said. “But it was enjoyable because the team was cool.”

The game of Jeopardy did not require participants to run or showcase hula hoop skills. Jeopardy at China Cup was a competition that tested participants on their knowledge of China’s history and culture.

SMU Student Audrey McClure liked how she got to learn about China while playing Jeopardy.

“I did not know that soccer originated in China,” McClure said.

Henry Lyons was attending the event to take a break from studying. Lyons helped his team-members score the most points during the game of Jeopardy.

“I definitely did learn a lot more about Chinese geography from this,” Lyons said. “I was pretty well-versed in the history coming into it.”

Team Black beat teams Blue, Green, Yellow, and Red to win chocolate gold medals. McClure did not win, but she was glad to be a part of a team.

“I did not know anyone before,” McClure said. “That’s what’s fun about these events. You get to meet new people.”

Students got the opportunity to eat Chinese food and have free Boba. Students were talking about how much they enjoyed the Chinese dish, Cong yo bing. Organizers of the event described Cong yo bing as Chinese pancakes.

“I really liked how this was an opportunity for people of different races to come together and appreciate and experience Chinese culture,” Chen said. “This is one of the cases where SMU really becomes an environment that cares about minorities.”