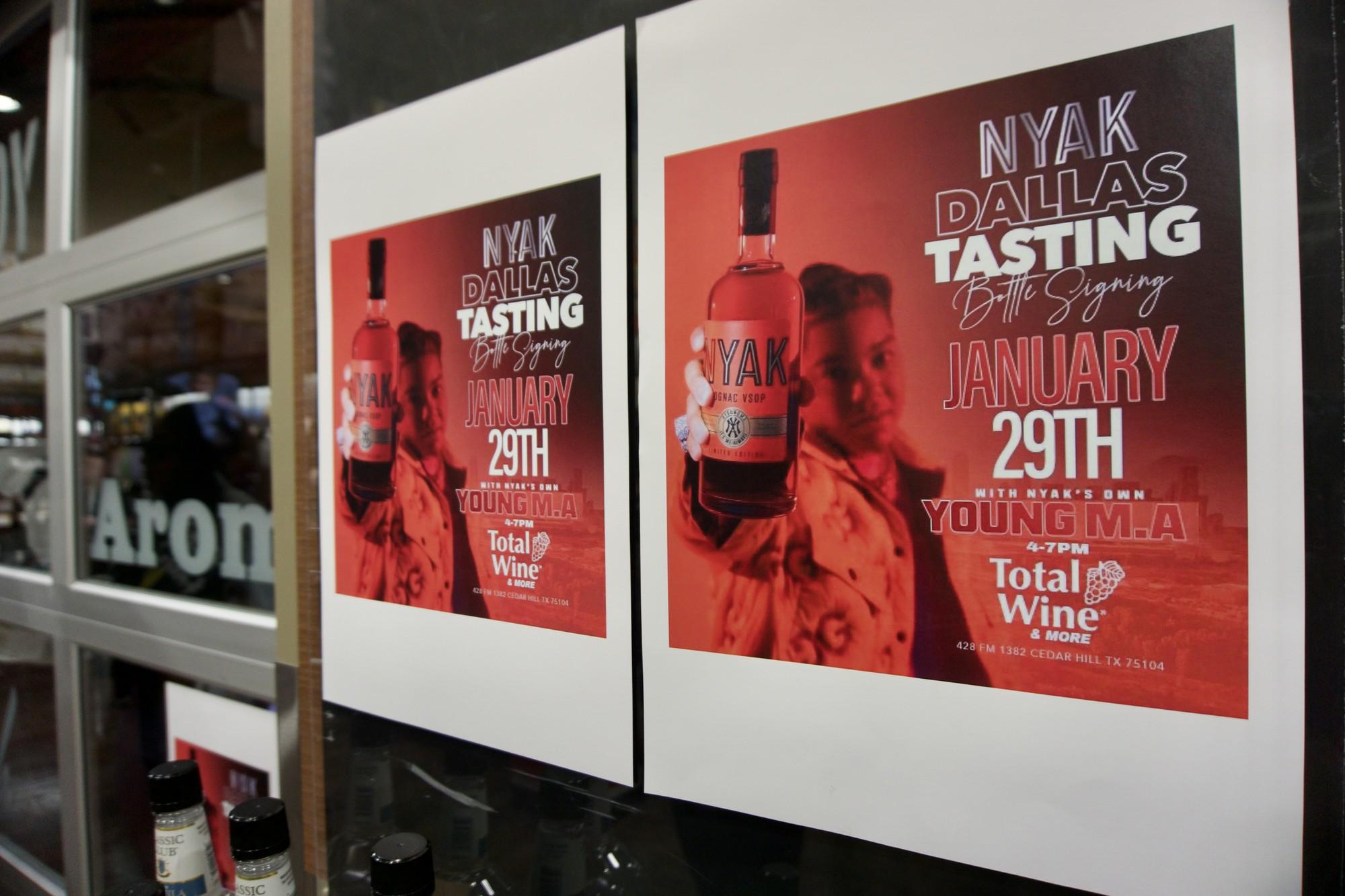 This month, the multi-platinum selling artist Young M.A. launched NYAK Red V.S.O.P, a line of Cognac that has become the fastest-growing Cognac brand in U.S. history. As part of the launch, the rapper held a pop-up launch party at Total Wine & More in Cedar Hill. While chatting with Young M.A. herself and co-owner of NYAK, Dennis McKinley, about the new line, M.A. explains why she collaborated with NYAK.

“It’s something I know I can sell cause I talk about it all the time, you know – we off the yak” Young M.A said.

Mentioning Cognac in her music, M.A. sees the collaboration as a “bridging the gap” opportunity. Behind the launch of NYAK Red, M.A. explains the production of the beverage, and how she had to learn the juices that went into NYAK Red. “For me it’s just something I’ve enjoyed…It was something I’ve always been invested in,” says the star. She believes that “if [she’s] drinking it, showing it, marketing it, [she] should invest in it” – and so she did.

With fans rushing into the store, lining up, and ready to pick out their bottle of NYAK Red signed by Young M.A., the artist sits on a white throne and makes her way through the mini red carpet signing bottles of NYAK Red and interacting with fans.

Excitedly running out the door with her new signed bottle of NYAK Red by Young M.A., one of M.A.‘s fans, Kyla Brown, exclaims that “Young M.A. is all over the internet. I love her flawless rhymes, but honestly I didn’t even know that she was going to come to Dallas. I came here to get a bottle of wine for my friend, but this is going to forever stay. I really appreciate when artists do this, and I really appreciate her. She’s super down to earth.”

With fans still lined up at the entrance of the signing, The Daily Campus’s Soksan Teng spoke with the rapper about the launch of her new alcoholic beverage, NYAK Red V.S.O.P. — “I’m excited. I’m ready to push it. Let’s go!” says M.A.:

Soksan: How did this all come about, and what was it like when you received the news that you’d be working with Cognac?

Young M.A.: I’ve always talked about Yak. That’s like one of my things and good people reached out, you know what I mean? I guess they’ve seen some type of longevity potential with me, or whatever the case. I talked about it all the time. We off the yak. This is lit.

Young M.A.: Well, basically I talk about it in my music all the time. I just been doing, my research on just the juices and everything like that. How Cognac has been produced and stuff like that. It’s just something I’ve always enjoyed. So it was like something I should invest in. I have been drinking Cognac since, you know, younger. I knew the taste. I know what certain Cognac tastes like, the difference between this brand and that brand and just understand the sweetness, the bitterness, whatever the case. Once I got my first sample, I just knew it was just perfect.

Soksan: Would you mind explaining your “RedLyfe” motto and the creative process that went behind the production of NYAK Red?

Young M.A.: “RedLyfe” is something that I started back in 2013, it just represents everyday life; something I came up with – everybody thinks it’s gang related, it’s not.

The color red just symbolizes so much to me – I believe in a lot of things. I’m a strong believer in God, and I believe in the blood of Jesus. Red has always been a true color to me and just sticks to me, so I felt like my own bottle has to be red just to stand out from the others.

Soksan: What was it like behind the scenes of creating this beverage, and how did you adjust to this new experience?

Young M.A.: I’m definitely new. You know what I mean? This is something totally new for me. Like, I never, never experienced this. I’ve always talked about it in music, rapped about it in music or whatever the case, but never experienced the actual transitioning to actually getting into the production of it – so it’s definitely new, definitely different. But I really learned more than anything… and as I’m growing, as we just launched, I’m gonna learn more.

Soksan: Were there any other prior ideas to NYAK Red that you ever thought about?

Young M.A.: Just the look of it, the taste, the smoothness… and just getting it out there to the to the club, you know, like having them turn up. Like one time I had a situation where something went viral with me on a certain product and without my consent, and they went crazy. So I knew being in this production would be something that involved me.

Soksan: How would you say NYAK Red is different from others in the entertainment industry wanting to release a beverage, brand or line?

Soksan: Is there anything coming soon that we should be looking out for?

Soksan: I know you came all the way down here to Dallas. Will you be touring anytime soon for your music?

Young M.A.: Yes, I don’t know necessarily Dallas yet, but I’m definitely planning a tour in cities that’s most marketed at. Then eventually we’ll tap into places like Dallas, probably the west coast and stuff like that. I see the love so we might tap in soon I don’t know…

Soksan: How would you say you as an artist target to Dallas?

Young M.A.: First of all, they targeted me. I’m just lovin’ their swag and just the hospitality. It’s the hospitality for me more than anything, because when you go up north it’s a little different, so when you come down south there’s a little more hospitality – people show a little more love and curiosity and stuff like that. To me honestly, I just embrace everything that just comes towards you.

During the interview it was pointed out that Young M.A. wore her fully red jacket from her merchandise line – Off the Yak. “It’s crazy because this is literally my song, and then we wanted to collab with NYAK. Now it’s just becoming my big thing.” says M.A.

Co-owner of NYAK, Dennis McKinley, who also starred in The Real Housewives of Atlanta, shared his reasons for including M.A. in the launch of Nyak’s new line.

McKinley and his team wanted somebody “who really drinks cognac for real without trying to play around and act like you drink it.”

Young M.A. set the bar up for the collaboration between those in the entertainment industry and the beverage industry – no pun intended. “That’s all she drinks, so it was a natural fit. She took the product, and she drank it. She said, man this is better than Hennessy, let’s go.” states McKinley.

Making the connection between a musician’s fanbase and the artist themselves is a priority that the NYAK team was ready to tackle. “You have your own brand and fan base. You outta make sure you marry the two” assuring that the musician and her fan base had a strong and supportive connection. “She had a taste of the product, and the rest was history.” says McKinley.

McKinley states that he is tired of supporting products that don’t care about the well being of his culture. For that reason, NYAK’s proceeds are given directly back into projects and organizations that support the Black community.

“It’s just been Cognac being brown. It just weaved its way into our community. It’s part of our everyday culture. We drink the product – Black folks drink the product. It’s very important that we tell folks that this is black owned. If you buy this product you’re contributing back to Black economics, and that’s what it’s all about.” says McKinley.

McKinley used his experience from working on The Real Housewives of Atlanta to identify Young M.A.’s main demographics.

“It’s important that you understand when you go on that show, what fanbase you have.” says McKinley.

Dallas ranked the second to third largest demographic for M.A.’s fan base. McKinley set aside the questions of – “Why not come to Dallas? Why not show some love? She got a base out here and it only makes sense.”