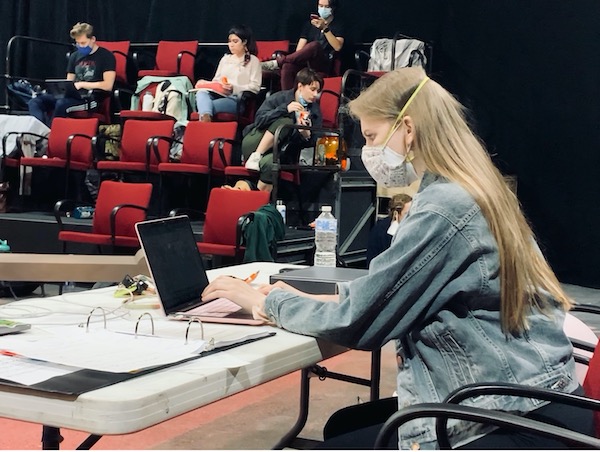 “War (What is it Good For?)” by Edwin Starr blares out in the room as actors emerge from behind a curtain. A fight scene ensues and one at a time, actors go down as they are killed. Melanie Peterman sits directly in front of the scene, carefully observing the action.

As soon as the last soldier is killed, SMU’s Theater director and associate professor Sara Romersberger calls to run the scene again. This continues for several minutes.

“You guys are doing great! Bear with us,” Peterman encourages the actors as they block the same part of the fight scene for the third time in a row to get the beats and movements of the killings down.

“Be back at 7:05!” She yells to the actors as they wrap up the fight scene after five consecutive run-throughs, giving them their first break of another long night of rehearsals.

Peterman has always had a love for theater and began stage managing in high school. She is the stage manager for the current play, “Lysistrata.” As SMU’s theater program slowly reopens, Peterman faces the challenge of addressing COVID. However, she is determined to not let the challenges bring her down.

Peterman was born and raised in Dallas, Texas. She attended Booker T. Washington High School for the Performing and Visual Arts.

Growing up in Dallas, Peterman knew she always wanted to go to SMU for its theater program. Now, she is a senior theater major, with a specialization in acting. She hopes to get her master’s in education from SMU.

“I love teaching,” Peterman said as she talks about her post-grad future. “During the summer, something that I do a lot is volunteering with different theaters around Dallas and helping teach the kids theater classes. So, I would love to go into acting and/or theater education. I just want to do as much as I can.”

Peterman has been stage managing since she was a teenager.

“I always was kind of attracted to it because I knew that to be a stage manager, you had to be able to be very organized and you had to be a good communicator,” said Peterman. “Those are some strengths that I saw in myself, and so I thought that that would be a good fit for me.”

As much as Peterman feels suited for being a stage manager, she also finds the experience uniquely rewarding.

“A lot of people think that it’s not an art, but it really is. It’s not just organization, it’s not just communication,” she said. “There’s this beautiful, artistic element to it as well.”

Peterman also enjoys working the other students involved in the play.

“It’s great to work with just so many incredibly talented people and seeing them do the things that they’re so talented at,” said Peterman.

Sinan Beskok, one of the actors in “Lysistrata,” knew Peterman before they worked together in this play. He believes that her style of stage management makes her unique.

“Melanie does a great job of establishing a positive environment for all the actors, always encouraging them, always telling them please and thank you,” Beskok said. “And she does the same for her assistant stage managers, which is actually a huge thing because I’ve worked with some people that will never say please and never say thank you and that’s just so toxic and so negative to the environment.”

The concern of COVID still presents challenges to the environment. Rehearsals are completely masked, and audience members who attend the play will have to wear masks. However, Peterman insists that practicing in masks presents less of a challenge than one would think.

“We’re far into COVID at this point, so I think we’re all pretty used to it by now,” Peterman said. “So, it doesn’t feel like too much of a burden, at least to me.”

Rehearsals have been underway since Oct. 18. “Lysistrata” is about the title character’s quest to end the Peloponnesian War by teaming up with the women of Greece to withhold sex from men until they negotiate a peace. The play was written in 411 B.C. but will be performed using a modern translation by Sarah Ruden.

“Lysistrata” opened Dec. 1 and will run until Dec. 5 in the Margo Jones Theatre. Students, faculty, and staff can buy tickets for $8 at smu.universitytickets.com.