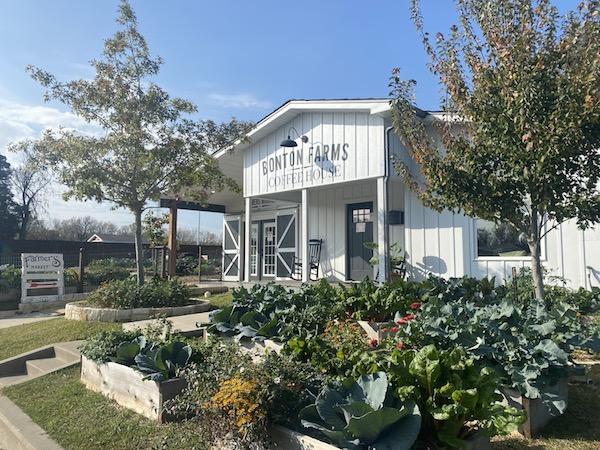 Just ten minutes south, there is a drastically different scene than the multi-million dollar houses that surround SMU’s campus. The community of Bonton is labeled as a food desert, where it is difficult to obtain affordable and nutritious food products. 85% of the men in the community have been to prison and many of the residents struggle to stay above the poverty line. For many years, the community found themselves neglected.

In 2014, Bonton Farms was created to bring hope to the community. Daron Bobcock and his wife bought a plot of land with a vision that has now been fulfilled. Now when one turns into the community of Bonton, there is a space filled with a coffee shop, cafe, temporary housing for people facing homelessness and rows of produce to be sold in the farmer’s market.

“We’re driven by the mission to restore lives, create jobs and ignite hope in a once forgotten and neglected neighborhood with some of the most marginalized people,” reads Bonton Farm’s mission statement.

The farm was built to change the community and the lives of those in it, and, according to the residents, its been successful in that mission. Sandra Cortinaz works in the cafe at the farm and is a resident. She expressed gratitude for all the farm has done for the community to promote unity, and decided she wanted to be a part of it.

“I’ve lived in this neighborhood for 14 years so I’ve seen this place evolve and go through a lot of good changes,” Cortinaz said. “It’s just made a very positive impact in our community.”

Cortinaz isn’t alone in feeling benefited by the hope Bonton Farms has brought to the residents. Hattie Hormon was born and raised in Bonton. She left for a time and also served a sentence in prison. However, she made her way back to her home and began working at Bonton Farms with a vision to collect donations of baby supplies for local mothers in need.

“I’ve been wanting to do this non-profit for a long time,” Hormon said. “I was spending my own money for it.”

However, the leaders at Bonton Farms found out about Hormon spending her paycheck on baby supplies and decided to help her get donations through facebook fundraising. Not only did the staff at the farm help get Hormon’s non-profit started, but they also helped her get a driver’s license, a truck and a home where she runs her non-profit, Hattie’s, out of.

“You can come down here and just better yourself,” Hormon said. “You can get a lot of help here. You just have to come forward and be willing to do the right thing.”

If you are looking to get involved in Bonton Farms’s vision for the community, they offer a variety of volunteer opportunities. Whether you want to milk goats or tend to the plants, you can click here to get signed up.