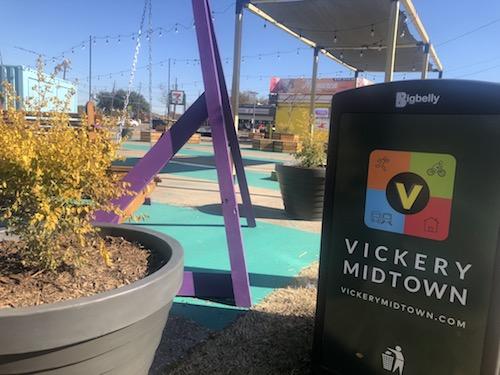 Private security officers patrol the streets. Fresh paint dries at the Five Points intersection. New street lights crop up along SoPac Trail. The signs of change and growth around Vickery Meadow are apparent all over the neighborhood. Most of these signs are proof of the work done by the Vickery Midtown Public Improvement District, also known as the VMPID or PID.

“We’re working on, you know, street light banners and putting all of our branding and marketing on trash cans and stuff like that, using the new name,” PID executive director, David Whitley, said. “We’re just working to evolve that over time.”

Vickery Meadow is a neighborhood of Dallas that is historically low-income and high-crime. Its population is over 40,000 and it houses several nonprofits that help low-income and immigrant families. The neighborhood is starting to see some changes, however, as rents begin to rise around the southwest edge of the neighborhood near NorthPark Center.

The Vickery Midtown Public Improvement District is a nonprofit organization that was started in 1993 to improve the quality of life for the people in the community. In recent years, the PID has taken major strides towards enhancing the safety–and scenery–of the community. The organization is currently working on several projects to revamp Vickery Meadow’s parks, streets and sidewalks.

The PID’s work towards enhancing the overall feel of the community is hard to ignore, but the long-term impact of these changes on the struggling families of Vickery Meadow is fuzzy. Lenita Dunlap is the CEO of Heart House, a nonprofit organization that helps teach and nurture children of Vickery Meadow’s immigrant and refugee population.

“The housing in Vickery Meadow is mostly all apartments,” Dunlap said in an email. “Any new housing built in or around the area isn’t affordable for the residents that currently live here.”

While the PID aims to solve a number of problems in Vickery Meadow, its main focus currently is public safety. In recent years, the PID has contributed to a variety of safety projects and has partnered with everyone from the Dallas Police Department to the Department of Justice. David Whitley says they add about 7,000 hours of private patrol to the district every year, and approximately 40 percent of the organization’s budget goes towards safety and security.

“The primary thing that we do and what the largest share of our funds go to is advanced security,” Whitley said. “We provide private patrol for the neighborhood that’s intended to coordinate and augment Dallas Police Department forces.”

But the PID does much more than hiring private security in their efforts to enhance public safety. The president of the PID’s board of trustees, Mark Wolf, says the organization also had a hand in the huge project at Five Points that was just completed in early November.

The project was geared towards improving the aesthetics of Vickery Meadow’s Five Points intersection, an area of the neighborhood that is notorious for its dangerous conditions, especially for pedestrians. The improvements include newly potted trees, fresh paint, and a more pedestrian-friendly environment for the children who often walk past on their way to the nearby schools. These changes to the Five Points intersection are part of a larger, nation-wide community improvement initiative.

“Crime is particularly persistent in the Five Points area in the heart of Vickery Meadow,” Wolf said. “So, currently, we’re benefitting from a national program, Project Safe Neighborhoods, which the feds are financing. So, they’re really in there right now focusing on felons and drug traffic.”

Jennifer Gates, the Dallas council member of District 13, says that Project Safe Neighborhoods was a highly collaborative effort at Five Points, with people working together from multiple levels of government.

“It is coordinated through Erin Nealy Cox, who’s the district attorney for the region,” Gates said. “It was community engagement with law enforcement and it was at a federal as well as at a local level.”

Council member Gates has played a key role in the recent work done by the Vickery Midtown Public Improvement District. She serves as chair of the city council’s Government Performance and Financial Management Committee and attends VMPID meetings regularly.

“Jennifer Gates has been, frankly, the first council member that gave us the time of day,” Wolf said. “She’s been quite engaged.”

As a council member for Vickery Meadow, one of the biggest issues that Gates has on her plate is zoning. The PID also has a voice in the zoning and development decisions that are made by the city when new developers come in.

“We generally sit down and talk with them and, you know, if they are looking for zoning approval or something like that from the city,” Whitley said of the developers. “The city oftentimes looks to us for what our thoughts or recommendations are as part of what they consider for, you know when they’re determining whether or not to grant the zoning.”

The PID must work with developers to ensure that their plans align with the board’s bigger picture of what the neighborhood ought to look like. When asked why the PID supported the rebranding and name change of Vickery Midtown, Mark Wolf explained that it came down to a matter of image.

Dr. Henry-Louis Taylor Jr., a professor in the Department of Urban and Regional Planning at the State University of New York at Buffalo, says rebranding is a key sign of gentrification. He has observed gentrified neighborhoods across the country and has noticed a pattern in the way gentrifying neighborhoods begin to be perceived in a new light.

“The press will start to say things like, ‘the neighborhood is rising,’” Dr. Taylor said. “This happens at the advanced stage of rebranding.”

The PID’s increased security, improved infrastructure and cleaned up parks all contribute to the enhanced quality of life in Vickery Meadow. But this has also created a new identity for the community. Gates says she’s not opposed to the modern, urban feel that the PID is going for–but the rebranding has caused tension between residents and property owners.

“There is concern from the current residents that the area could get too expensive and push them out,” Gates said. “That’s something that we’re very cognizant of, is trying to stabilize the neighborhood and try to continue to allow for workforce housing and affordable housing in the area, but not to concentrate it.”

While those working with the VMPID focus on improving the neighborhood, there’s no denying that these improvements could have some impact on housing costs–including the housing of underserved families in the neighborhood. Lenita Dunlap voiced her worries in an email that Vickery Meadow may not be able to serve as a place for immigrant families to grow in the long-run.

“The potential is here but so many families leave for their chance of the American Dream miles away,” she said.