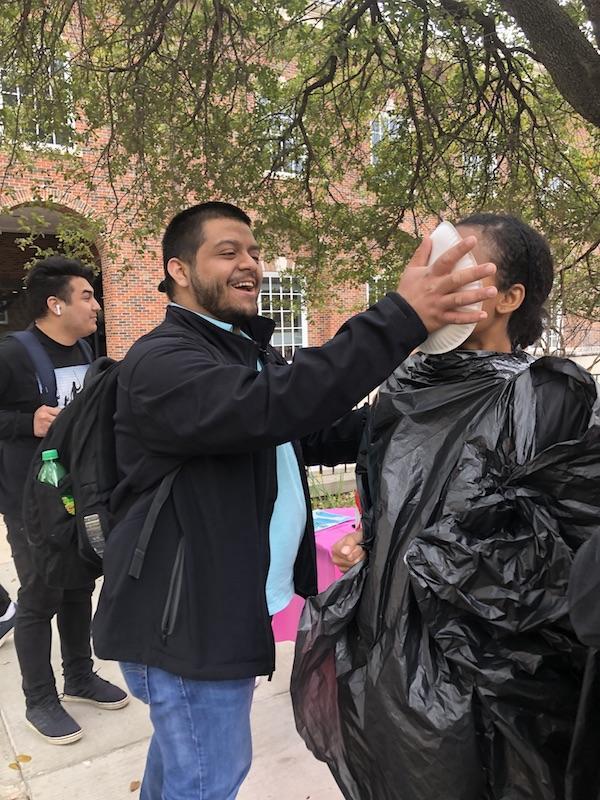 The Multicultural Greek Council (MGC) and SMU communities united to support Sigma Lambda Gamma at Pi(e) a Gamma on March 20 at the West Bridge.

However, the event was not exclusive to the MGC community.

30 SMU students attended the event to support their friends who are active members of Sigma Lambda Gamma.

“They deserve a lot of recognition for the type of events they put on,” SMU student Hannah Ali said. “I know how much it means to them to come to this fundraising event for their chapter.”

At the event, students purchased pies and threw them at members of the chapter. All $160 raised will support Sigma Lambda Gamma’s programming, national retreat and convention fees.

In addition to pies, many members of Sigma Lambda Gamma participated in “Strolling” at the event. “Strolling” is when a Greek organization of color dances in a line that is unified. It is often known as the party walk and only active members of the chapter are allowed to participate in the dance.

“It originated with organizations which are traditionally black or historically black,” she said. “We express ourselves in a really originated black culture.”

“We decided this was the best way because we can directly involve students on campus,” she said. “It is really fun and kind of a weird thing to do.”

Sigma Lambda Gamma is one of the larger multicultural sororities at SMU, but they hope that this event encourages more students to join.

“We want to increase our membership,” Dinulescu said. “Part of this is to get people interested in us.”

However, increasing membership was only one of the event’s goals.

Students involved in both the SMU and MGC communities hoped that this event encouraged fellow students to support MGC’s many philanthropic partnerships.

“I would emphasize the philanthropy that each organization represents,” Husein said. “They are giving back to the community, so you should give to them.”