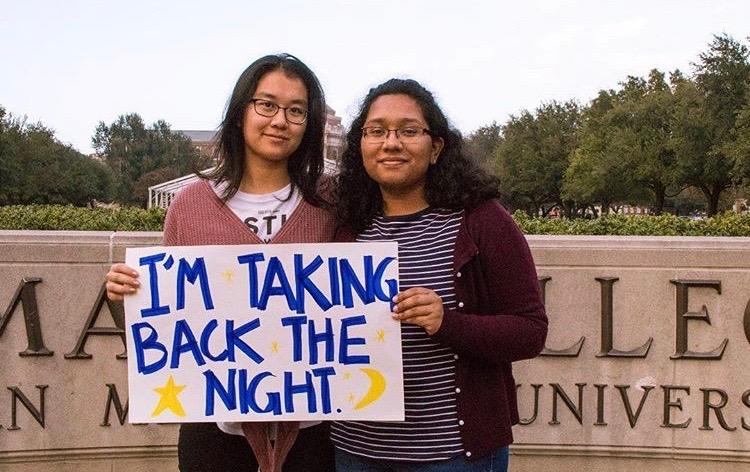 SMU senior Karen Guan walks up the stairs at the Hughes-Trigg Student Center wearing a purple backpack with several buttons on it. One reads “EVERY DAY IS HUMAN RIGHTS DAY.” As she walks into the Women & LGBT Center greeting everyone, she seems comfortable and at home around her chosen community.

Freshman year, she walked into her first Feminist Equality Movement (FEM) meeting at the center and found a community that shared her passion.

“It was such a close-knit and supportive community for me as a freshman,” said Guan, a finance and public policy major.

She has been walking up those Hughes-Trigg steps, through that door, and into her safe space for the past four years.

A group of students fills the small room in the Women & LGBT Center. It’s decorated with images of inspiring women and art saying things like “Empowered Women, Empower the World.”

The diverse group sits on the couches, chairs and rugs in the crowded, yet cozy room while answering icebreaker questions. They talk about their favorite movies and candy while laughing and sharing childhood stories. This is Guan’s favorite part of being a member of FEM.

“I loved it from the beginning. It was such a close and supportive community for me as a freshman and I’m happy to say it’s remained this way, even as a senior,” said Guan.

Guan’s family is from China, but she grew up in Southern California and later moved to McKinney, Texas. She said she realized at the age of 11 that she felt a lack of self-confidence. Even at that young age, she noticed the unspoken standards that women and girls were expected to conform to.

She recalls beauty standards and body image having the most impact on her, especially standards associated with her East Asian background, where the definition of beautiful means having lighter skin and being thin.

“I wish the world was a little more forgiving of women in the sense that we shouldn’t feel like we need to live up to these unspoken standards,” said Guan.

Guan is an observant and curious person. She self-reflects often and thinks before she speaks. At 15, she began identifying as a feminist. Seeing the systemic inequalities in the life around her sparked her curiosity, and it led to a growing passion for feminism.

She now realizes how important it is to take a step back and block out those messages.

“It’s something we take in and we don’t fully realize the effect those kinds of messages have on us until we are much older,” said Guan. “I think we are seeing some positive changes and I’m really excited to see our generation be a part of that change, but also lead that change.”

Dr. Katherine Boswell, a professor in the Women and Gender Studies department at SMU, says the students who are activists share a lot in common with feminists throughout history, they have a vision and they are hopeful.

“One of the things I love about being around the community of students here at SMU is how fired up and inspired everyone is because they believe they can make a difference and because of that, they actually do make a difference,” said Boswell.

Guan credits her involvement in FEM to both her personal and professional growth. After joining as a freshman, she held three executive board positions, including the presidency. Guan paved the way for Ceydan Kaya and Lamisa Mustafa, who are the current co-presidents.

Kaya said Guan helped them understand what FEM should be and what goals they should be reaching for as a group. “We try to be very caring and empathetic,” Kaya said. “We want to give SMU students a safe space and somewhere they belong.”

Guan proudly calls herself an intersectional feminist. Not only does she promote gender equality, but also race and class equality. Consequently, Guan says she has learned and grown a lot since she was 11.

As a senior, Guan’s time at SMU is coming to an end, but as she reflects on her time in FEM she emphasizes how proud she is of the organization and hopes other students can have a great experience as she did.

“If I could do it all over again, I would,” said Guan.

This semester FEM will be hosting its annual event, Take Back the Night, which sparks campus-wide conversations against sexual assault on Nov. 13. For more information visit FEM on social media @SMUfeminists.