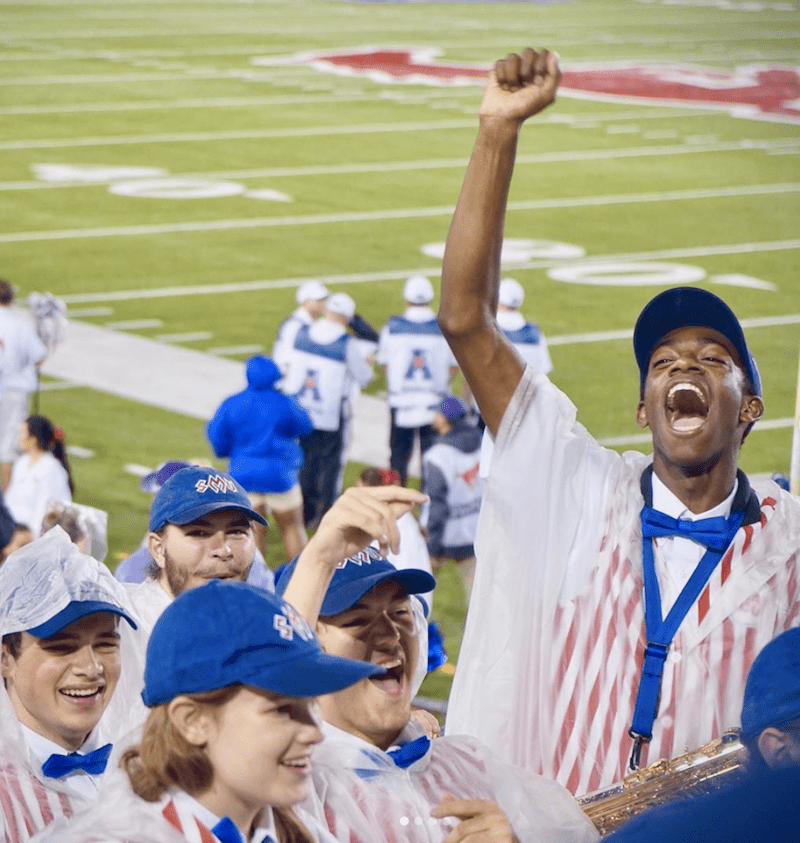 For Mustang Band Drum Major Ian Perkins-Smith, music has always been a part of life.

“Growing up there was always music in the house,” Ian said.

“I was like, ‘I don’t want to deal with a string instrument, I don’t want to draw anything’ – because I’m terrible at that. So, I chose band,” Ian said. “I settled on the saxophone.”

This decision would prove fateful, as Ian kept with band all through high school — even going on to be Drum Major for two years. When he accepted his admission to SMU, auditioning for band seemed like the natural next step.

“I thought, ‘Why not join the band?’” Ian said. “So I tried out. They liked me, I was accepted into the band, and my first year went really well.”

A big part of that success was the community found within Mustang Band.

“When I first got on campus — I moved in early because I was in band — but I think because of that, I really gained my first family on campus,” Ian said. “That was big for me because it held me together here my first year. It was pretty awesome. I love that community that I get from it.”

Since his freshman year, Ian says that Mustang Band community has only grown — and grown significantly. With the addition of 20 more musicians, the band marches 90 strong today.

“That’s a pretty big change, which is very good,” Ian said. “We have more people, we sound better, and honestly, I think that we’re a little more spirited now. Not that we weren’t, but we’re even more so now.”

That spirit carries on into Game Day, where things can get a little hectic.

“Three or four hours before kickoff, we have our rehearsal. That’s the first thing we do. We will immediately go from the rehearsal to a parade. After that parade — starting this year, since we only have to do one parade — we get a little bit of time to Boulevard. After that, we change into our game-day uniforms, go to the stands, bring our uniform bags, water bottles, etc. Then once we have everything settled in the stands, we will go to pre-game. We do our pre-game performance, wait for the team to roll out, play our fight song a few times, and then we’ll do what we call “haul ass” to the stands, which is where everyone runs back to the stands. Then we play during the game, and the rest is history.”

It’s during these game days where some of the band’s many traditions are established.

“We do this thing after we play through ‘Peruna,’” Ian said. “We stop at the wall in front of the press box, and we yell. Right before we do our long haul, we go “AHHHHHHHHHH! Hey, SMU, SMU, Mustang Band!”

For those who love music and want the community that it provides, Ian recommends joining the Mustang Band.

“Try out, even if you’re unsure, because it’s a great experience to have,” Ian said. “It’s a community like no other.”