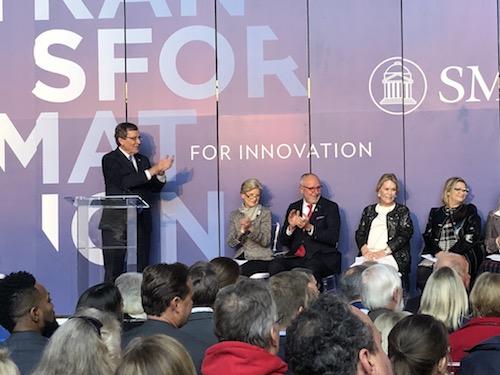 Meadows students are buzzing about the upcoming renovations to the iconic Owen Arts Center. Dozens of alumni, donors, faculty and students gathered in the building’s lobby to celebrate the project on Friday, Nov. 8.

Darian Taylor, president of the Student Senate, represented the student body on stage. He is a Meadows student himself, majoring in Public Policy and Corporate Communication, as well as Public Affairs.

“I think that these renovations are really vital to the student experience, especially all the performing, visual and communications students we have here on campus,” Taylor said.

The Meadows renovations come just in time to commemorate the art school’s 50th anniversary. Algur H. Meadows pledged $8 million to endow the school back in 1969–the largest single grant the university had received at that point in time. Today, Meadows School of the Arts is home to some of the largest areas of study at SMU.

Students like Nicole Daniels, who studies vocals at Meadows, say the historic building is due for an upgrade.

“I feel like there’s a lot of stuff for music and for the actors and the dancers,” Daniels said. “But to get way more of the visual arts part will be really cool.”

The Meadows renovation project has more than $30 million of funding to build modern academic environments for SMU’s artists to feel inspired. There will be new spaces for the visual arts, art history and creative computation.

The exterior of the building will also get major upgrades and will be renamed after Gene and Jerry Jones.

“They’re really going to renovate this space and reimagine, really, to where it’s a–really it’s an atrium, it’s a performing arts place,” Taylor said. “It’s a place where you come in and you feel welcome.”

Learn more about the upcoming Meadows renovations at https://giving.smu.edu/owen-arts-center-transformation/.