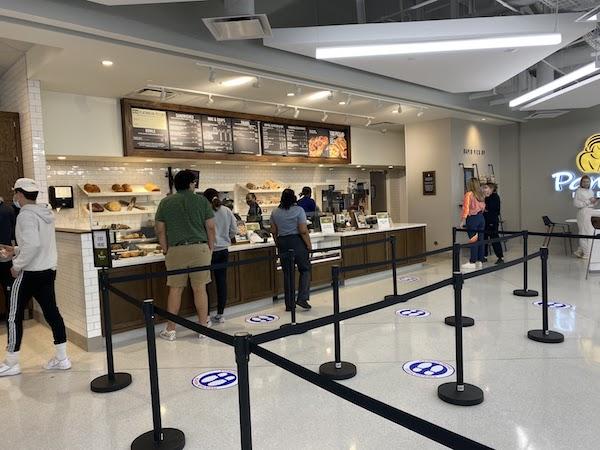 Amid the COVID-19 pandemic, students have been given an opportunity many others don’t have — to learn in an on-campus environment. Protocols for wearing masks and social distancing were put in place and explained, but one thing was not clear to students: Would there be consequences for those who didn’t follow the rules?

Last week, an email was sent to the SMU community that was the first to condemn student actions of those not following protocol. This semester, the newly renovated Hughes-Trigg Student Center (HTSC) revealed a Panera Bread. Some students frequent this new Panera as many as four times a week. This email celebrated the students’ use of the restaurant but addressed COVID-19 concerns that had arisen because of the heavy traffic in the building.

“Some student behavior is concerning,” read the email from the Division of Student Affairs. “We have seen students neglecting to wear masks and face coverings appropriately, honor social distance guidelines, and adhere to other expectations set forth in SMU’s Pledge to Protect.”

Daniel Heard is a student that visits Panera often throughout the week. He said the behavior varies by the day. He doesn’t see large groups of people maskless but he said he does see the behavior addressed in the email around lunch time.

Heard said he believes the Pledge to Protect is non-effective and called it a performative action by SMU. The pledge is a form students were asked to sign at the beginning of the school year outlining the rules to keep themselves and others safe. With the breaking of this pledge in the Hughes-Trigg Student Center, consequences were laid out for those who did not follow the rules.

First, the student would receive a verbal warning. After that, they will be asked to leave. The email said it is also a possibility the student will be reported to the Student Conduct and Community Standards. If the issues continue, indoor dining privileges could be revoked.

Adam Cebulski, the Chief of Staff in the Division of Student Affairs, said after observing the misconduct of students in the area, it was clear increased signage in the Hughes-Trigg building explaining the rules was necessary to participate safely.

“I don’t believe the guidelines are any stricter than they were, they’re just, hopefully, clearer,” Cebulski said. “Many spaces around campus have unique elements to them so we wanted to ensure our community is aware of the expectations within various spaces in HTSC.”

Some students believe this clarity has been necessary and is welcomed. Student, Olivia Witt, said she felt like the rules needed to be communicated and that would solve the problem.

“I think that people will obey the rules,” Witt said. “I would hope that people just didn’t understand what the rules were and how maybe it was different from other areas around campus.”

Witt had questions about who would be monitoring the behavior and how the rules would be enforced, however, another student, Justin Wilkey, said he observed the enforcement first-hand. He said while he was eating at Panera, an SMU staff member made an announcement reminding the students of the guidelines that were to be followed as a verbal warning.

“I think giving people a warning can be a fairly effective way of doing things, and I think the protection of everyone on campus is pretty important,” Wilkey said. “So if people who are being kind of lax about wearing a mask or social distancing are not given those sorts of privileges, I think that’s pretty fair.”

Other students disagree with Wilkey. Elizabeth Berling feels SMU may be too harsh with their punishments through her own experience.

“I ended up getting a conduct violation for not wearing my mask in the laundry room alone,” Berling said. “But I feel like sometimes RA’s let students off easy and it’s not completely enforced for everyone.”

Berling said the guidelines do make her feel safe and she thinks students generally respect the rules. However, she said she doesn’t think she is alone in thinking the consequences can be taken to an extreme.

“For example, I think not allowing students to enter into each other’s dorms creates a toxic social environment that can decrease students’ mental health,” student Natalie Tirill said.

Despite concerns, these students agree that however the punishment is carried out, SMU is doing their best to keep students safe and COVID-19 cases low.

“It’s a campus-wide effort and I know that it means changing the way we do things and that can be challenging at times,” Cebulski said. “But I think students are resilient and will get through this period as long as we all follow the guidelines the campus has implemented.