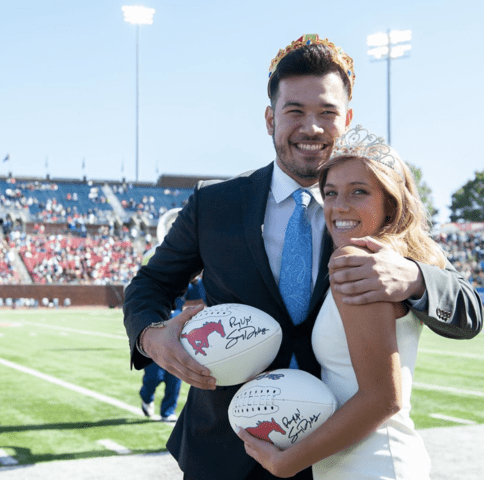 After a week of Homecoming activities – from the annual Texas Children’s Dance Marathon to pomping – the 2019 Homecoming King and Queen were crowned Saturday, November 09 at halftime during the SMU v. East Carolina football game.

Candidates were considered by a multitude of factors, ranging from campus involvement and school spirit, to academic achievement and GPA. In addition to being a member of the Greek Community, Rhamy is a Residential Assistant for the Cockrell-McIntosh Commons, a Student Ambassador, a leader in STUMO, and co-founder of the Mustang Theme Park Design Club. Similarly, Matthews is involved with the Bush Center, Young Life, Latin Honors Society, and works as a tour guide in addition to being on staff at Baldo’s Ice Cream. The Daily Campus interviewed Rhamy and Matthews for their thoughts on winning the titles of Homecoming King and Queen and senior year.

DC: How did you initially feel about being nominated for Homecoming Court?

Matthews: “I was extremely honored that my organization decided that I would be a great representative of who, as a sorority, we each strive to be. I was pretty shocked when I was nominated and definitely felt a pressure to represent Chi-O the best I could! I was excited at the opportunity to both show SMU and represent how hard working and spirited Chi-O strives to be.”

Rhamy: “I knew right off the bat that I had a really cool opportunity on my hands, so I was mostly excited to be a part of such a long lasting and fun tradition here at SMU. I was a little upset how I missed the century mark by just one year, but really who’s counting?”

DC: What was the Homecoming process like for nominees? What all did you participate in? Which event was your favorite and why?

Matthews: “Candidates had to participate in a service day, in an interview, help with pomping, answer questions at Rock the Vote, create a promotional/creative video, and ride the float in the parade at homecoming!”

“My favorite event was pomping with my sorority. Although I don’t consider myself to be the most creative, I love to pomp because it gives me time to see other girls in my sorority who I don’t get to run into very often! I think pomping is so fun because it is such a mindless activity; it really gives you the chance to talk and connect with people you haven’t seen in a while! Further, its really cool to me that in order to finish the float, the entire chapter has to work towards a common goal to perfect the finished product.”

Rhamy: “If I had to choose a favorite event I think it would have to be the float building process. I just find it crazy how much fun you can make rolling thousands of pieces of colored paper for hours on end when you’re surrounded by a good group of people.”

DC: How did it feel to be selected [as homecoming Queen and King]?

Matthews: “It was an incredible feeling to be selected as Homecoming Queen! I was so shocked and honored that not only my sorority thought I was a good representative, but other peers of mine viewed me as a good representative of SMU. It was also very exciting to know that all of our hard work for the week paid off! Our homecoming chair, Allie Hartman, was incredible this year and worked harder than anyone during homecoming, and I was excited that Chi O as a whole was recognized so that she would be affirmed in her hard work too!”

Rhamy: “I was on cloud nine. I knew how much hard work so many people from both Beta and Chi O put in this week and I was ecstatic to see it get rewarded through a crown.”

DC: As a senior, how did you feel about this being your last homecoming?

Matthews: “It is so sad but also so exciting! I think it’s so cool that next year when I come back to SMU it will be an actual homecoming! I definitely do not have a desire to leave SMU yet, but I am excited to come back for homecoming as an alum.”

Rhamy: “One thing I became very aware of this year at homecoming is how even though I might not see homecoming again as a student, it doesn’t mean that I can’t see the tradition again as an alumni. A huge highlight of the weekend was seeing all of the alumni that I knew from previous years come back to celebrate our school and our football team, and seeing all of their faces made me excited to be back on the Boulevard a year from now.”