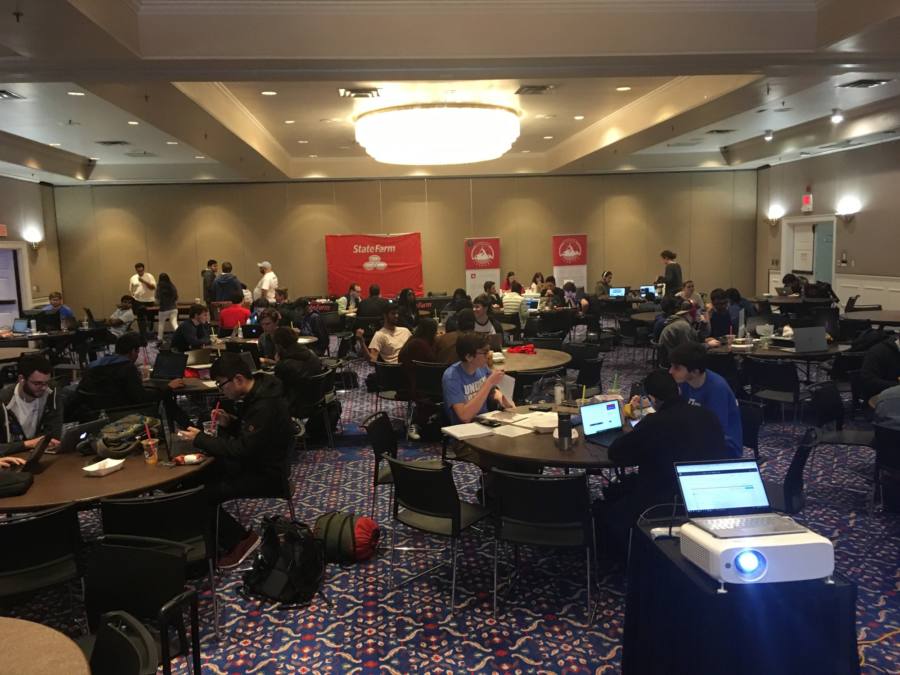 “We get 50 people-that’s enough to fill a room. There’s enough momentum to carry energy in the room,” Irfan said.

As hackathon organizers visited engineering classes and personally invited people to RSVP, RSVPs shot up to 100 people. Then, it skyrocketed to over 200. Not only did SMU students attend, but students from across Texas, including UT Dallas, UNT, and Texas A&M. A student as far as Lamar University in Beaumont, Texas attended. Irfan said they’ve had 100 to 125 people show up.

A hackathon is an all day competition where teams of coders compete to finish and showcase a project for corporate sponsors.

“It’s a competition where a bunch of people, not necessarily all programmers, get together. And they create something in a short time period–usually 24 hours. Some of them [the hackathons] are 36 to 48 hours,” Cameron Brill, HackSMU attendee, said. “And usually there’s company sponsors who come in with challenges.”

Brill is a first-year computer science major at Texas A&M. He and UNT students formed a team to complete a project for State Farm, a sponsor of HackSMU.

“I like coding. I do it on my own time, anyway. Coming out here, I get to meet new people and make something in a really short time period, and it’s a lot of fun to do that,” Brill said.

UT Arlington first year Sofia St. Julien attends hackathons and loves working on a concept and finally getting it. She, however, believes other hackathons, like UTA’s, were more competitive than SMU’s.

“It was very competitive. There were people from all over the place,” St. Julien said. She said one UTA hackathon attendee flew from New York. She suggested SMU could possibly schedule their hackathon in the fall, since she finds spring is busier.

Hackathon attendees worked in the ballroom, with one part of the ballroom sectioned off for competitive teams who worked in complete silence. There were workshops all day as well as the 24-hour team competition to participate in. Sponsoring firms tabled in the ballroom, and there was the option to test a VR headset in the HTSC Varsity.

“The goal of this was to kind of create those neural pathways. The hardest part is always creating that first pathway…so then people can easily kind of see [how to plan a hackathon]–they have the rule book, they have the experience, they know what to do,” Irfan said. “SMU knows what this is, so everyone doesn’t have to go and explain what a hackathon is. ‘Oh HackSMU- we know this.'”

Instrumental to this wide-scale, overnight event was the people behind the event.

“Having a great team is the most important thing, by far,” Irfan said.

Students were thinking of an SMU hackathon several semesters ago. Irfan said the catalyst was Sabrina Peng, vice president of the Computer Science club, and Scotty Shaw, a Duke University graduate who wants to start a nonprofit to help schools hold hackathons, came on board.

“Yeah so Momin came to me with the idea for starting up SMU’s hackathon and I had some connections from other hackathons that really helped us get this thing off the ground,” Peng said. “The planning process was definitely stressful – there were so many things to cover, and we had very little time as we had trouble finding the best weekend to do it, since there are always a ton of events going on at SMU.”

“Plus our CS department is smaller than those at other schools, so our goal was just to put on an event and get as many people coming to our first edition as possible!” Peng added.

Shaw graduated from a high school in Waco and received his undergraduate degree from Duke.

“I’m aware there’s a lot of opportunities that we don’t have in this area that east coast kids have, in terms of high school and college, and hackathons are one of those,” Shaw said. “And I was thinking, you know, alright I should come back here and try to create them.”

Shaw had a hand in helping UNT and UTA have their hackathons. He is sending inquiries to more universities to share the skills to organize hackathons.

#HackSMU The last workshop is !Light (“No Light,”) where #hackathon goers recreate a website just by looking at it on another screen. They can’t look at the original source code. Some aren’t using the internet for help. (Original website designed by CS Club VP Sabrina Peng.)

Unaffiliated with the the Computer Science club, SMU junior Carter Koehler joined the Hackathon team within the last month. He is finance director for the team. Koehler is on the HackSMU team, which came into existence to organize this one event.

There was a lot of long-term work (seek senate funding, reserve space, ensure prizes, create a dev post) and day-of work (bring food vendors here, check people in, direct people on campus, help sponsors set up) to be done. Koehler also connected one of HackSMU sponsors, Credera, to the event. Other sponsors and partners include the George Bush Presidential Center, Dialexa, State Farm, and Capital One.

“I went to one a year and a half ago at UTA. It was HackUTA. It was their first time. So, Scotty helped them get that project off the ground,” Carter Keohler said. He learned about the basic planning behind hackathons from Scotty then. When he heard HackSMU was in the works, he emailed Shaw.

“I was immediately like, ‘Ok, I know what’s going on here.’ And I emailed Scotty because he does this,” Koehler said. From there, Koehler joined the team. He managed check requests and invoices and kept up email correspondence with stakeholders, like SMU Lyle, SMU Guildhall, and State Farm.

“There was a lot of behind-the-scenes work,” Koehler said. He hopes there will be more in the future in regard to SMU hackathons.

That concludes our coverage of #HackSMU , pilot #hackathon at #SMU. “Quiet hours” for coding begin at 11 p.m. pic.twitter.com/VKQyuKOJJr

“We were kind of trying and failing to get to that point where we can build that community. We tried creating hackathons back then–but what we thought, get people in a room, get food, get people to do stuff,” Irfan said. “But, slowly, we learned there’s a lot more than that.”