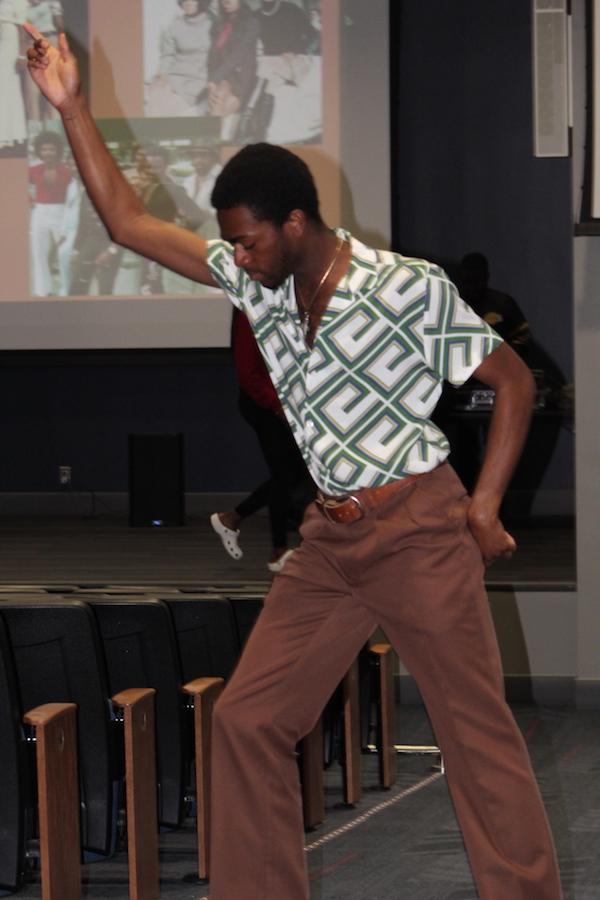 The Black in Time fashion show took place Feb. 28 to conclude this year’s Black History Month. The event was put on by the Association of Black Students (ABS) who partnered with the African Student Association (ASA). The evening consisted of six categories, each highlighting how Black fashion has evolved throughout the decades.

“Her Story,” ABS’s theme for Feb. was incorporated into the show. Each category was accompanied with a song by a female Black artist. Songs featured included Say My Name by Destiny’s Child, Lose Control by Missy Elliott, and Foolish by Ashanti.

“The theme was emphasizing influential Black women in our community because they are often overlooked and overshadowed, and we wanted to take this time to really emphasize them,” said Sparrow Caldwell, the show’s director.

Caldwell said, as part of this theme, it was important that each gender had their own spotlight in every category of the show.

“We really wanted to highlight both gender’s fashion to show how female Black fashion has evolved over the decades as well as men’s Black fashion,” Caldwell said.

The categories included the ’70s, ’80s, ’90s, ’00s, African Streetwear, and future Black designers in the DFW area. A fan favorite was African Streetwear which was led by the ASA president, Abena Marfo. Marfo not only was the lead for planning and finalizing outfits but also walked in the show.

“I definitely do a lot of the background work and I thought it’d be fun to step out of my comfort zone and be in the front and center walking in the show,” Marfo said.

She said for each category, with the exception of future designers, the models put their own outfits together. The African streetwear section was unique in that many of the models walked in clothes they received from family members in their home African country.

“My outfit was made from Ghana,” Marfo said. “I am Ghanian so my grandma sent me that outfit.”

Marfo emphasized the importance of the African streetwear section because of the influence it has on American fashion and iconic looks throughout the decades. Caldwell reiterated this importance.

“We finished the show with African streetwear section because our fashion would be nothing without paying homage to the motherland,” Caldwell said.

Marfo said another highlight of the show was the future designers section. She said it allowed young student designers and other young Dallas names to get their product recognition.

“In the beginning we put out a word to schools in the community to get their participation because we wanted it to be a whole community event,” Matthew Merritt, co-host of the show.

Mindful Maniac was one of the labels showcased in the fashion show and was co-founded by SMU alumni and former football player, Demerick Gary. Other designers in the show were Lakayla Cole, recent Texas Southern University graduate, and Alicia Crayton from UNT. The event also included a performance by the University of North Texas’s African dancers team.

“The team did a whole mix and it was really cool,” Caldwell said. “There were twelve of them on stage and they were bringing a lot of energy.”

Caldwell said the event was a huge success in that many people of all backgrounds and ages showed up to support and have fun. She said it was really important to her that the fashion show was a safe space for everyone to come and enjoy.

“Everything was free,” Caldwell said. “After all the hard work that we did this summer and fall semester with social justice, we just wanted an opportunity to celebrate Black culture, and we didn’t want to put a price tag on that.”

Caldwell discussed the trauma that took place over the summer for the Black community and the wear of constantly having to fight for every aspect of their lives. The month of Feb. , to her, was to recognize the great things the Black community does and the greatness within themselves.

“Our fashion was a staple and showed unity across a lot of turmoil that we had to go through,” Caldwell said. “We are students but we are Black students, our story is different from other people, and our story deserves to be told.”

Caldwell said that this is not the end of the events celebrating the Black community and to watch social media platforms for upcoming events. ABS partners with many organizations on campus and their events will also be promoted through Instagram and Twitter.

“Look forward to more events by the association of Black Students because Her Story will continue,” Caldwell said.