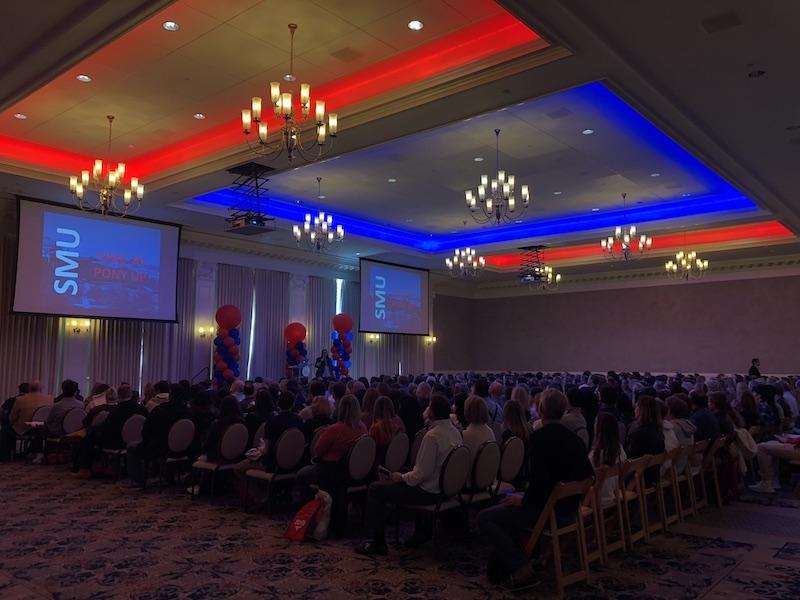 Destination SMU occurs four times during the spring semester. The event was specifically curated for admitted students and their families.

“The main goal would definitely be helping students, admitted high school seniors, really just figure out if SMU is the right fit for them,” admissions counselor Elishah Ramos said.

Admitted national and international students were invited to spend a full day on campus. Each admitted student was given a red drawstring bag upon arrival, making it impossible to miss them on campus.

Students and their families had the opportunity to tour the city of Dallas and sit in on classes of their choice.

“Some students are sometimes debating what they even want to major in,” Ramos said. “So having them sit in on those classes and talking to the professors helps them a ton in realizing that the professors genuinely care about the students.”

Current SMU student Olivia Cahill looked back on her experience with Destination SMU and vividly remembered the classes that she attended during her visit.

“My favorite part was shadowing a political science class with a professor I would eventually have my sophomore year,” Cahill said.

While a good number of students who attend a Destination SMU event are torn between SMU and another university, Cahill had already chosen SMU when she visited campus.

“I decided to attend Destination SMU to get a peek into my future at the school,” Cahill said. “By that time, I knew I was coming here and I wanted to the opportunity to envision what the next four years had in store for me.”

Current high school senior Sofia Tonelli also decided to attend the event on Monday despite already being sold on SMU.

“I chose to go because I wanted to acclimate myself more to the campus and community and show SMU to my mom,” Tonelli said.

Tonelli also chose to sit in on a political science class during her visit and said that it was her favorite part of the day.

Ramos said that the admissions team has been hosting this event for over ten years. Each year, they ask for feedback from prospective families to improve the experience of the students.

“Anything that is particularly good – if it’s not broke, don’t fix it, kind of thing,” Ramos said. “But if there’s something that just gets a robust amount of negative feedback, we will for sure re-evaluate it.”

There were multiple breakout sessions throughout the day for perspective families to sit in on. The sessions happened all over campus, and they discussed everything from Greek life and housing to study abroad opportunities.

The day came to a close with final words in the Mack Ballroom, which was followed by complementary Pokey-O’s under the flagpole.