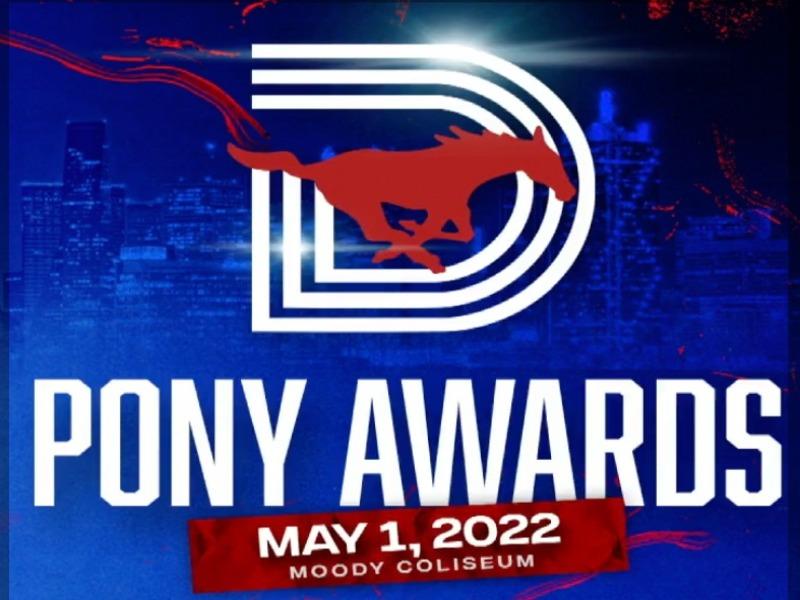 Dressed to the nines, the stars of SMU athletics shone brightly in Moody Coliseum Sunday night as the annual Pony Awards returned in person for the first time in three years.

The end-of-the-year award ceremony recognizes individual athletes for their accomplishments in academics, athletics and community service as well as celebrates the achievements of every program for their teams’ successes throughout the school year.

“We don’t take for granted the rigor that’s required to be a student-athlete at SMU and to reach the standard of excellence that you’re able to do in competition, in the classroom and in the community,” SMU Athletic Director Rick Hart said.

The most prestigious honor an SMU athlete can receive is the Athletic Director’s S.P.I.R.I.T. award given to the student-athletes who best exemplify the Mustangs’ values of service, passion, integrity, respect, innovation and teamwork.

This year’s S.P.I.R.I.T. awards were presented to Katherine Jakeway of women’s tennis and Hayden Howerton of football for their contributions in athletics and academics as well as being a positive influence and resource to those around them.

Other individual honors were given to women’s soccer’s Jewel Boland for the Unity in Service award, men’s swimming and diving Connor Dalbo for the Presidential Award of Excellence and Jack Easton for the Student-Athlete Choice Award, voted on by his peers.

“I wish I could be there in person, I just want to say thank you and I’m very honored and humbled to receive this award,” Ndoye said in a recorded video played at the event.

Cotton Fields of men’s swimming and diving and Kaitlyn Gearin of track and field were named Freshman of the year, football’s Tanner Mordecai and women’s basketball’s Savannah Wilkinson received awards for Newcomer of the Year and Parker Hardigree of men’s swimming and diving and Juliet Traylor of rowing were honored as the student-athletes of the year.

Traylor won from a field of 10 nominees. She has been on SMU’s rowing team for five years. In spring of 2021, Traylor helped lead the team to its first conference championship. She was also named to Collegiate Rowing Coaches Association (CRCA) All American team last year.

Hardigree beat out popular quarterback Mordecai. Hardigree is also a two-time NCAA qualifier and has been the team captain for two years.

Safety concerns regarding COVID-19 caused the last two installments of the Pony Awards to be held virtually and, in doing so, left a fan favorite award: the best dressed. Pictures of the nominees were posted to the SMU Athletics Twitter page where voting took place throughout the show.

This year’s winners of the best-dressed award were volleyball’s Hannah Jones who wore a shiny purple dress and football’s Carter Link who showed his mustang pride by wearing a red and blue suit donned with SMU’s iconic ponies on his pants.

The award ceremony was followed by dinner for the attendees and an after-party outside Moody Coliseum.