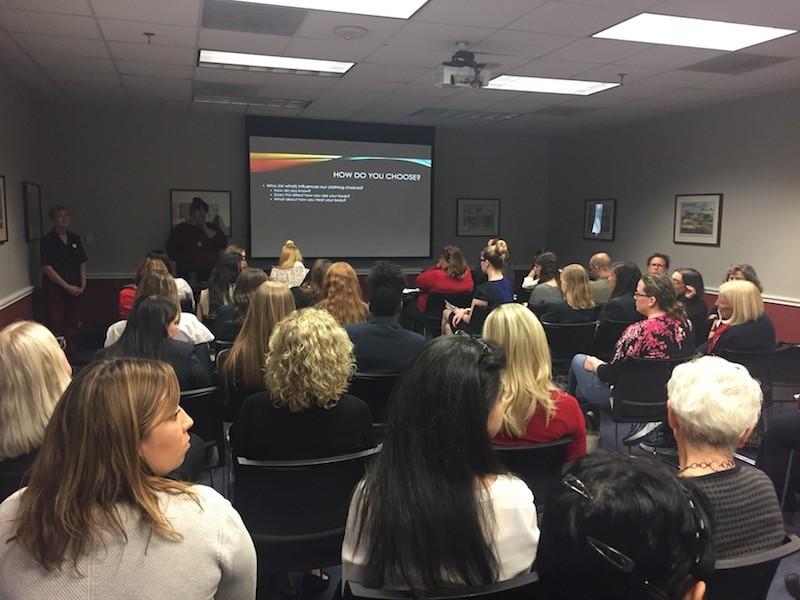 The debate over bras raged on — half the room agreed that women shouldn’t have to wear bras to work and the other half found it unprofessional.

“Women will only be taken seriously in the workforce if we dress professionally,” said SMU student Anna Brooks.

This debate was just one of many discussions during the 2 p.m. interactive workshop sessions at the 52nd Annual SMU Women’s Symposium held in Hughes-Trigg at SMU March 8. The theme of the student-planned symposium this year was “My Body, Not Their Politics,” focusing on issues such as sexual violence, reproductive justice, body image, women and politics.

“The theme addresses issues women face as well as the current political climate,” said Aurora Havens, co-chair of CORE and the Women’s Symposium.

Women packed into the different interactive workshop sessions to openly discuss and debate women’s bodies and politics among experts and others in attendance.

“This is a good place for people who don’t have a place to talk about the feelings that they have to come and be heard and learn more,” said co-chair Sachi Sarwal.

During the interactive workshop, “Can You See Me,” a packed room of women discussed and debated how women are depicted and stereotyped in the media and provided advice on how to appreciate their own bodies.

“Body concept has been framed in society from actual politicians, TV, and individuals,” said Val Erwin, program advisor for the Women and LGBT Center. “For me it’s a myriad of trying to think through what a body means and what it means to be a woman.”

Attendees also had the opportunity to ask a panel of experts questions and share their personal stories and experiences. The workshop gave a voice to SMU student Anna Brooks, who has never had a place to engage in these conversations.

“Body image has always played a big part in my life and to be able to talk to other women, older and younger, about it has been a really great experience,” Brooks said.

The symposium drew crowds of women of all ages, which is one of the many unique and special aspects of this event.

“I always most enjoy the inter-generational part of it,” Erwin said. “We have high school students here, SMU students, and even women who call themselves the ‘Godmothers of Dallas.'”

Women and godmothers continued to discuss women and body politics until 8 p.m. when the event concluded with an awards dinner honoring women in Dallas who have made a significant impact on the quality of life for women overall.