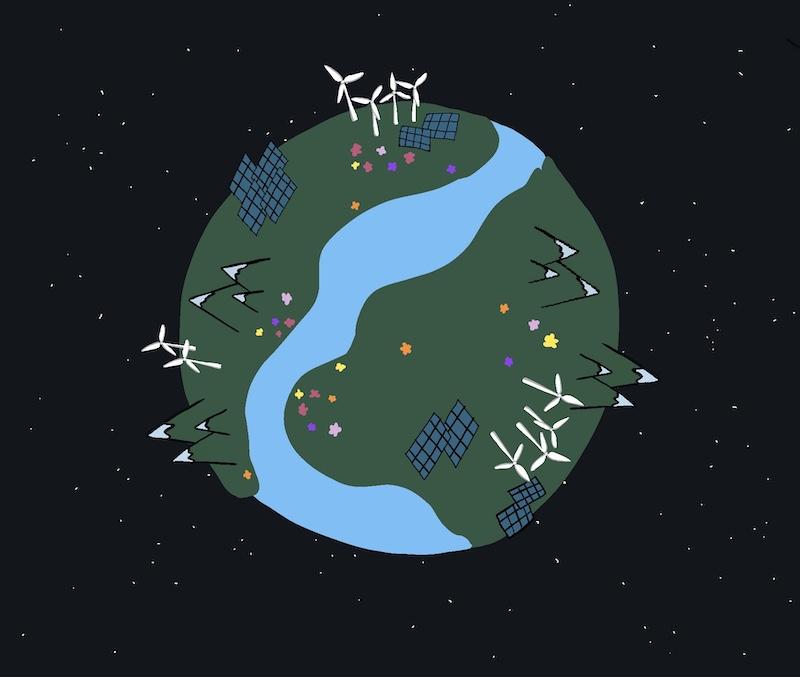 The Green New Deal is something we hear about on campus, social media, and around us every day. However, if you asked a few students what it actually was, they would probably be stumped.

This congressional resolution – widely popularized by Senator Bernie Sanders (VT) and Congresswoman Alexandria Ocasio-Cortez (NY) – aims to address the environmental issues of the United States and the climate crisis aggressively while also taking into account socioeconomic factors that tie into current environmental issues. The Green New Deal is celebrated by its supporters as a way to solve the climate crisis, but also attacked by its opposers as a socialist scam. Here are eight things you really need to know to understand the Green New Deal.

1. The Green New Deal is a blueprint for tackling climate change.

The proposal aims to eliminate greenhouse gases in an attempt to slow global warming and address the climate crisis. It is a sort of “package” of legislation that addresses a handful of issues, but primarily greenhouse gas issues that cause the majority of climate issues stemming from the United States.

2. The name is inspired by FDR’s New Deal.

FDR’s New Deal was a similar bundle of programs and projects that aimed to address the devastation caused by the Great Depression. Similarly, Green New Deal supporters and environmental activists view the climate crisis as equally as important and threatening; unfortunately, due to the politicization of the climate crisis, little action is being taken to reduce emissions and tackle environmental issues.

3. The overall cost of the Green New Deal is still disputed and unknown.

It’s currently impossible to nail a dollar amount – opponents claim it would cost $100 trillion, while supporters argue that it would save $2 trillion over a 10-year period.

4. The Sunrise Movement pioneered awareness for the Green New Deal.

5. The movement started with a sit-in outside Nancy Pelosi’s office.

Following the midterm elections in 2018, Sunrise Movement activists held a sit-in outside of Nancy Pelosi’s office demanding immediate action on the crisis. They called for more attention to and action by the U.S. government on the matter, as well as the nation’s contributions to carbon emissions and global environmental change.

6. The goal of the resolution: reduce greenhouse gas emissions (among other things).

According to the Sunrise Movement, the Green New Deal is a “10-year plan to mobilize every aspect of American society to 100% clean and renewable energy by 2030.” The plan addresses greenhouse gas emissions – mainly carbon emissions – as its primary environmental issue. These gas emissions destroy the ozone layer, raise the Earth’s temperature, and cause glacial melting and sea level rising. The environmental goal is to have net zero emissions by 2050, which the Sunrise Movement believes is an ambitious but necessary goal to save the planet.

7. The plan helps to address other important things, such as racial inequality and socioeconomic disparity.

The Sunrise Movement’s Green New Deal also demands and addresses “a guaranteed living-wage job for anyone who needs one, and a just transition for both workers and frontline communities.” This speaks to the functioning and fair society that Green New Deal supporters Bernie Sanders and AOC seek out, as they want to address other issues that come along with the climate crisis, including environmental injustice. For example, low-income communities are more at risk for negative health effects like cancer as a result of toxic waste dumping.

8. The proposal is non-binding.

None of the legislation in the Green New Deal is binding, meaning that if passed, none of it would automatically become law. This is important to note because most of the opposition to passing the Green New Deal lies in economic consequences that, in fact, would not become a reality immediately. Supporters seek to bring this to public attention in an effort to remove negative connotations of the bill.

Overall, the Green New Deal is not a one-size-fits-all solution to climate change – it brings in many other highly politicized issues. However, the plan does address emissions, which is the main source of environmental degradation globally, and the U.S. is one of the greatest contributors to that. To halt or slow the climate crisis, aggressive action is needed, and the Green New Deal is the first aggressive piece of legislation addressing the issue.