He stops his golf cart, steps out and taps his iPad screen to start issuing its 20th ticket of the morning.

Richard Holloway is a supervisor for SMU Parking and ID Card Services, better known as Park ’N Pony. On a recent ride-along, The Daily Campus experienced what life is like on the other side of the ticket.

“We pay enough for our parking passes,” Hanchey said. “So it’s really annoying when we get tickets.”

“When they get upset, I think it’s mainly because they get mad at themselves,” Holloway said. “They knew they parked in the wrong place and think they could just get by, but it didn’t work. We gotcha.”

SMU parking enforcement wrote just shy of 20,000 parking tickets between June 2015 and May 2016, said director of Parking and ID Card Services Mark Rhodes. In June 2016, the cost of many parking infractions increased from $30 to $50. 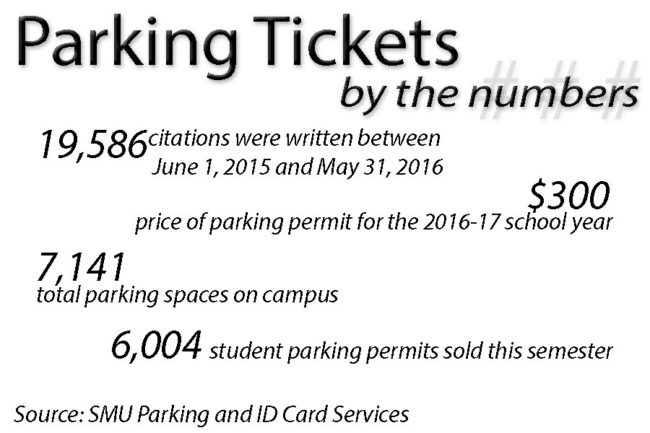 Most students never actually meet Holloway or the two ticket officers he supervises. Instead, students associate the parking enforcement personnel with the yellow envelope and citation slip left on their windshield.

Holloway said he was writing a ticket one day and admiring the car’s USC license plate holder when a student charged at him, flailing her arms and yelling at him to stop.

Holloway laughed as he thought back to the girl chanting the words and jumping to the motions of his favorite fight song as a lot full of students stared at the spectacle. What the student didn’t realize is that Holloway always throws away a ticket if the driver shows up to move their car while he’s writing it, no fight song was necessary.

Hanchey said she’s had success putting old parking tickets on her windshield when she knows she’s parked illegally. She does this so ticketing officers see the old ticket and assume it’s new, so they keep driving.

After working in parking enforcement at SMU for 15 years, Holloway said he’s all too familiar with the old ticket swap.

“They know all kinds of tricks and everything like that,” Holloway said. “But it’s kind of hard to fool us old people.”

But it’s not all tricks. Holloway said there was one student who tried charming their way out of a ticket.

“The note left on the car said, ‘It’s Valentines Day, please love me. Don’t give me a ticket,’” Holloway said.

Last month, senior Hayden Fields was running late to take a test and parked in a meter space outside of Boaz Commons. Fields was fresh out of coins, so to compensate for the unfed meter he left three one-dollar bills under the windshield wipers.

“I wish it had worked,” Fields said.

Fields returned to his car after the test and found the three dollars he left and a $35 ticket under his wipers.