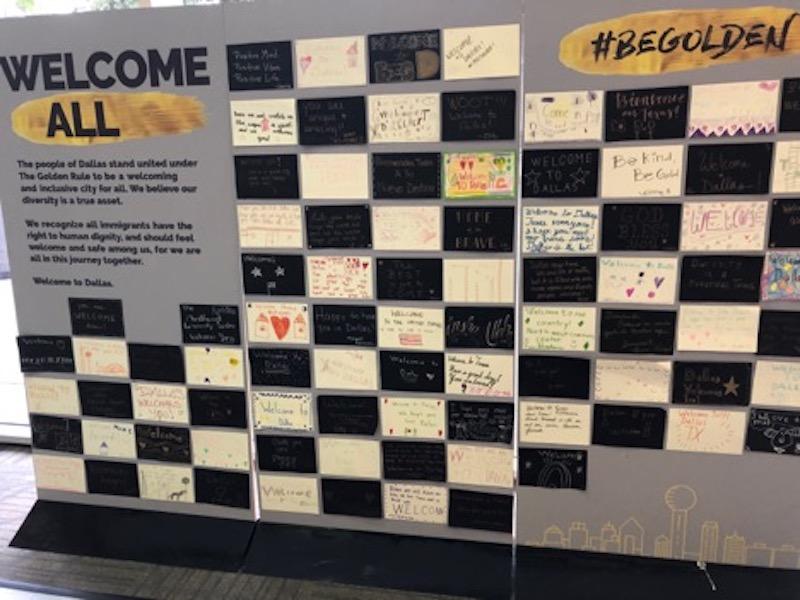 They sit in a circle and their heads face a drawing on the board. Two parallel lines showing “Main Street” run through squares labeled “A-F.” The teacher asks: “If you walk straight on Main Street and go to the third building on the left, which one is the bank?”

It was “Directions” day at the ESL class at the Northwest Community Center (NCC) in Vickery Meadow. At least 20 Refugees from places like Myanmar and Congo are in attendance to learn how to get and give directions in English. Next week, the class will have another theme to help the refugees learn the English language and adjust in the country.

Teacher Nancy Devine said that people attending her class, all have different goals. Some are there to get their GEDs while others are still trying to learn the basics of the English language.

“They are here to better themselves,” Devine said. “They have really come a long way.”

The ESL program is just one of the many programs offered at the Northwest Community Center. The center was opened in 2016 by the Northwest Bible Church as an effort to extend its support to the refugee community in the Vickery Meadow neighborhood of Dallas.

Vickery Meadow is a diverse neighborhood in the 75231 zip code of Dallas. The neighborhood is home to a large number of refugees settled into apartment complexes throughout the community. According to a University of Arlington study, Vickery Meadow is one of the most “ethnically diverse and culturally rich neighborhoods” in Dallas with over 40 different languages being spoken. Refugee ministry leader at NCC Jean Congera has seen Vickery Meadow undergo changes in the past 13 years both in terms of demographics and infrastructure.

“This neighborhood is diverse so it has a lot of people from many different countries,” Congera said.

A growing number of shopping centers, a Whole Foods grocery store, gas stations, and upscale apartments on Park Lane have replaced the older apartments that were home to refugees. The U.S. Census Bureau reported a steady increase in the number of businesses from 2011 to 2016. Vickery Meadow had 1,422 established businesses in 2011 and 5 years later the number grew to 1,531.

“When I came it was just apartment complexes,” Congera said.

With the rise of modern amenities in a community come rising prices. According to Zillow Research the median rental price of households in the 75231 zip code was approximately $900 in 2017 and the price today is $1300. Congera said that refugees who come to Vickery Meadow do not stay there very long.

“They move around to other apartment complexes,” Congera said. “One of the reasons is that in this area somehow the price goes high.”

Refugees settling in Vickery Meadow may still require guidance and resources. The Northwest Community Center located in the middle of the refugee population of Vickery Meadow, provides the community with the resources they need.

Jeff Cross, interim refugee ministry director at NCC, said that the center is open to all, but is mainly used by non-profit organizations that offer services to the refugees in Vickery Meadow.

“The space here was planned knowing we just we wanted everybody to feel welcome,” Cross said.

Many of the non-profit organizations were working out of the apartment complexes in Vickery Meadow.

The Northwest Bible Church once offered help with English classes and job services from a small space at Santa Fe Apartments and another at the Ivanhoe Apartment complex in Dallas.

“It just was a very small space so the move to this location helped us expand our capacity to serve more people,” Cross said.

“I like to think of them as the North Texas Food Bank for diapers,” Cross said.

Cross noted that in October, Distribution Day was able to serve 250 families. They also have baby showers for new mothers in the neighborhood. Over the past three months the center was able to provide 30 mothers with outfits for their newborns, milk bottles and newborn diapers. Cross said that the supply may not last the families long but it can help save them some money.

“We’re just trying to give them a little bit of income support through diapers so that they redirect some budget on some other necessary things,” Cross said.

Toward the back of the resource room there are two shelves filled with boxes.

“Those are birthday boxes that we are able to give to families of kiddos that are having birthdays,” Cross said.

On the second floor of the facility, Healing Hands has a clinic for new mothers as well as a pediatrics department. On the opposite side, the Vickery Trading Co. (VTC) is visible through the glass doors. The Vickery Trading Co. is a non-profit business that teaches refugee women how to sew and work in a professional environment. Women at the VTC can earn for the materials they produce. Working mothers can leave their children under supervision at NCC’s daycare downstairs.

Congera helps refugee families in many ways such as filling out applications for jobs, Medicaid and FAFSA.

“I’ll do a lot of things,” Congera said. “Mainly we focus on job training.”

Congera said that to him success means seeing the people he helped, help others.

“I’ve seen a lot of refugees step in and say ‘yeah I am a beneficiary but I want to help,’” Congera said. “I would say that is a successful story.”

Volunteers like Douglas Buhrer get to benefit from the Northwest Community Center in their own way. Buhrer is a student at the Dallas Theological Seminary and is now interning with the NCC and helps with facilities and events in the building. Buhrer said he is inspired by the work that he sees non-profits do at the center.

“Long-term, I’m hoping to do a similar type of program where I help serve the community through multiple programs,” Buhrer said.

Buhrer also said that his passion for service helps him give back.

“I love people and I love partnering with organizations to help serve the community,” Buhrer said. “They all bring different cultures and it’s fun.”

Buhrer then walked with a young gentleman wearing blue jeans and a jacket. The man politely approached Devine to ask where the English classes were being held.

“Sorry to interrupt,” the gentleman said. “My English is not very good.”

Devine then introduced the gentleman to the group that is learning to read maps. Toward the other end of the center, Laylah and a few other students are in the Advanced English group learning about abbreviations.

“What is FWY?” Laylah asks.

“That is short for ‘freeway,’” the teacher said.

In front of the main door stands a board that reads “Welcome All” and “#BeGolden,” which stands for the Golden Rule. The board is filled with welcome notes written for and by the community members.

“The church just has a heart for making sure that people that come to Dallas feel welcome,” Cross said.