The voices of Asians deserve to be uplifted, recognized, and encouraged as immigrant and international students from all over Asia. This was the resounding message a panel of experts and professors left on the “Asian Asian American, and Pacific Islander Voices in Higher Education: Virtual Colloquium” on Friday, April 8 at SMU during a virtual colloquium about issues these groups face when assimilating into American culture. 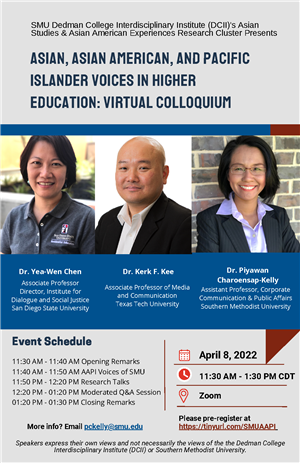 “Coming together as a collective, it’s not easy,” Professor Yea-Wen Chen, a guest speaker from San Diego State University, highlighted.

The diversity within the Asian community makes it even harder for AAPI students to identify, empathize, and connect with one another. But becoming unified is an important step in the right direction according to Professor Chen, who spoke about how the fragmentation and ambiguity within these groups makes it hard for them to come together

“The goal is to mobilize a collective voice,” Professor Chen continued.

She spoke about her studies and the data she found on just how important on-campus resources are to help facilitate growth and stability within AAPI students.

“It’s great that we have this office [the Office of Social Change and Intercultural Engagement] available, and we should uphold that, but we have to make sure that people from different backgrounds are represented in that office,” Dr. Kelly noted.

Her data (across 506 university students throughout the nation) revealed that the most important factor in the psychological well-being of AAPI individuals is leadership communication. The ability of leaders within college campuses to empathize with and represent students is essential to a collective harmony in the asian community.

Dr. Kelly also emphasized how it’s important for international students. to preserve culture and stay true to your identity when coming to a new country. While assimilation, in particular becoming open to a new culture is important, it’s just as necessary to stay grounded and remember your heritage.

“You want to be proactive in finding, building that relationship [with someone],” Dr. Kelly said.

To her, having a companion or group of people when away from your family is key to being compatible in a new country. Interacting with new people and having a positive mindset are two recommendations that she wants to pass onto incoming AAPI students who are starting their college journey.

“That strong relationship, it will keep you rooted and will help you understand new culture” she shared.

SMU Freshman Sarah Khoja, who led a research project surrounding multiple SMU alumni and over 20 transcripts of their stories, also shared some takeaways on how we can advance AAPI communities.

“Many participants felt the university is not actively representing asian American students,” she stated. “In some classes, students felt a burden to represent themselves.”

While campuses did have some resources to aid students, many asian students felt that these resources were not for them, and did not support them, Khoja summarized.

She encouraged campuses like SMU to have social spaces for AAPI students, where they can comfortably talk with other people who look and share the same experiences as them. These spaces would foster greater empathy among students and make them feel belonged on a campus like SMU, where the majority of students don’t look like them. A preservation of spaces to relax and chill with others would really help Asian immigrants or international students feel welcome.

SMU sophomore Logan Lu, an international student from Beijing, China, spoke about how he feels being a “foreigner” on the Mustang campus.

“In some social scenes, like the Greek Life section, where most of the students aren’t Asian, it’s hard for you to integrate because you don’t know anyone. That’s the part [of SMU] I feel is more exclusive,” Lu shared.

He also spoke about his history in America, when he moved here in 9th grade, and his experience as an Asian international student in boarding school in places like Nebraska and New England.

“My first high school [in Nebraska], I was really uncomfortable in the beginning, but that discomfort challenges me to grow more and be tougher. I think that can be applied to SMU in some sense because there aren’t that many international students and so you have to step outside of our comfort zone and embrace the challenges that are coming for you,” Lu said.

“The fact that we come from a different setting and that we have to learn English as a second language and use it to learn other things is hard,” he voiced.

International and immigrant students from the AAPI community face a variety of struggles and issues in a country like America. The professors outlined a series of professional recommendations and personal anecdotes to help these students feel more aligned with the Western world.

People not in these communities who want to help can do so as well.

Dr. Kelly mentioned how non-AAPI people can do simple things like asking “how are you doing”, inviting them to events, and being an attentive listener can go a long way.

“Encourage them to speak up,” she said.

We should all look out for our peers and give them the confidence to speak up and share their ideas with us, so that they feel less marginalized and just as worthy as us in a new, unknown country that presents to them a boatload of obstacles and challenges.