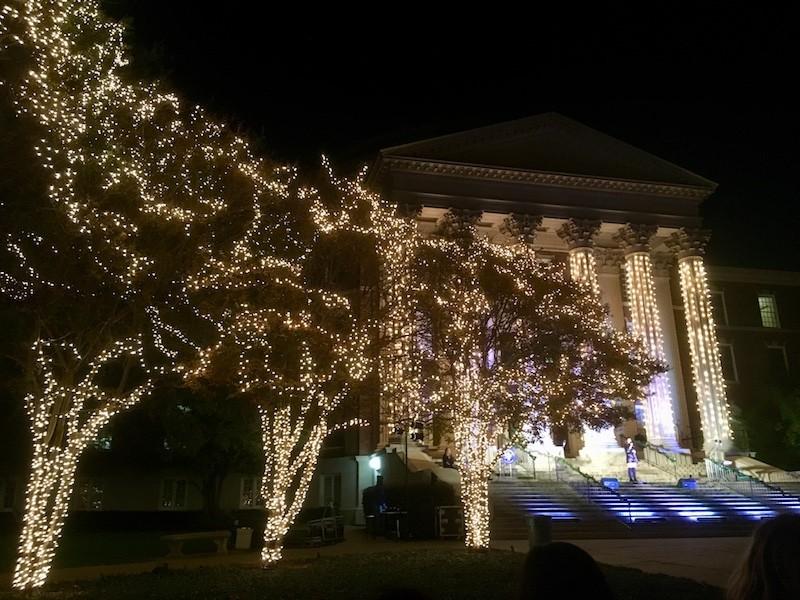 Bright lights illuminated the SMU campus and Dallas Hall at the annual Celebration of Lights on Monday night. The ceremony brings together students, families, and even pets to sing songs, light candles, and watch the twinkling lights come to life.

The festive tradition, which began in 1977, features the lighting of Dallas Hall and SMU’s Christmas tree, performances from talented student musicians, and President R. Gerald Turner’s reading of the Christmas story from his family bible. Performances from SMU’s own Southern Gentlemen, Belle Tone’s, and individual students all sang holiday carols.

“This is my fourth year attending the gorgeous event,” said senior student Ellie Zales. “I have attended every year since I was a freshman; it just puts you in the holiday spirit.”

The ceremony, sponsored by Student Foundation, took place on SMU’s Main Quad and began at 7 p.m. Student Foundation Entertainment Coordinator, Sydnie LaDuke, knows just how much preparation and time went into this event and said that it would not have been possible without this year’s Event Chair and junior student, Amanda Huber.

“We have been planning the event since January and started our official countdown 91 days ago,” said LaDuke in an interview after the event. “Amanda has lived and breathed this event for the past three months.”

Over 900 people RSVPed on Facebook, and over 3,500 people of all ages gathered to enjoy the tradition. Attendees were treated to baked goods from JD’s Chippery and Bird Bakery. SMU alumnae Richard Putnam, Eleanor Rosler and their golden-doodle, Barley (named after the infamous Barley House) have made this their Christmas tradition.

“We both graduated from SMU in 2014,” Rosler said as he asked a reporter to take their photo leaving the event. “We look forward to it every year and haven’t missed a year since we left SMU.”