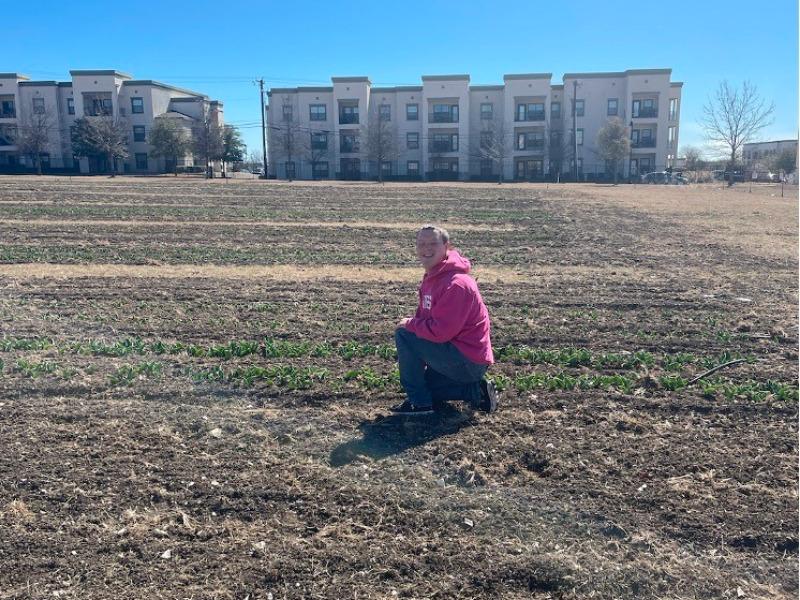 Michael Poston bends down to his knees as he stands on two acres of a field near his home in Waxahachie, Texas. He shows off the tiny sprouts of green bulbs just beginning to push through the soil. It’s almost a month away until the tulips will be in full bloom and ready to be picked.

The 27-year-old, who lives five minutes away at Daymark Living, a quality housing community for adults with intellectual or developmental disabilities (IDDs), is excited to see the tulips in a rainbow of hues come to life. He’s looking forward to showing them off in full display at Tulipalooza, which returns every year in March.

“What affects me is the passion for it,” Poston said. “We get to do Tulipalooza every year.”

This year, the fundraiser festival took place from March 18-27. Poston helped with the fundraiser by maintaining the gardens, setting up for the event, and handing out flyers to visitors.

The event is more than just a field of 300,000 planted flowers. The mission of the beautiful Poston Gardens is to raise funds and awareness for the community at Daymark Living. Poston says he takes pride in helping with Tulipalooza because of the passion that the Daymark residents and visitors have for coming.

Like the flowers themselves, Tulipalooza is a growth experience for its volunteers. The event’s growth has helped provide jobs and scholarship money for its residents. Poston hopes his friends at Daymark Living who participate in the event also get the same feeling of pride. It can create raise awareness for adults with IDDs and ultimately improve their lives. The funds from the event go to 12 North Texas charities.

“I hope that the people that don’t live at Daymark also grow, thrive, and get to have a new experience from this,” Poston said.

Poston and his sister were in the first graduating class of the Ashford Rise School of Dallas. His sister soon departed for college, but Poston could not do the same. However, Poston’s father felt that he shouldn’t be limited just because he has an IDD. Soon enough, his family built Daymark Living for him and others like him because he didn’t have the option to go to college after high school.

Poston and his father both had the vision to build a garden that could serve as an opportunity for those with IDDs. The two started Poston Gardens and the annual festival, Tulipalooza, as a way to raise funds so adults with IDDs could live at Daymark Living who otherwise couldn’t afford to live there. The money raised from the event goes to funding scholarships for residents at Daymark.

But Daymark living isn’t just residential living. It provides programming, job coaching, education courses, and training for its members to go out and become contributing members of the community. Although Poston has also worked at The Ashford Rise School of Dallas and Fresh Market Coffee in Waxahachie, he continues to take leadership in his community by helping lead Tulipalooza alongside his father.

“I would say it was both of us [that wanted to start it],” he says. “I never really knew my dad would like tulips, but he was traveling a lot to Holland and other places, and tulips became a fan favorite.”

When he decided to start Poston Gardens, Poston’s father partnered with Dutch farmers from Holland to meet with tulip bulb distributors. After picking out the varieties, the bulbs were shipped over and chilled for six months until they were crated in Waxahachie. After that, the bulbs were farmed with heavy machinery.

Poston says obtaining these beautiful flowers is not easy but it is worth it. Aside from the beauty of the tulip garden, the event helps raise funds for Texas charities. Poston works with many members of the Daymark community but works especially close with Kari Zerbe. Zerbe, who is Tulipalooza’s chair, coordinates partnerships with the 12 North Texas charities.

“We are raising funds through people purchasing tickets, but somebody might walk through these gates and say, hey, this certain charity really speaks to me,” Zerbe said. “Charities can connect with new donors and new people that want to support them through Tulipalooza.”

The charities help make the event more memorable for those at Daymark. Like Poston, Ashlynn Owens was diagnosed with an IDD and lives at Daymark. She also enjoys working at Tulipalooza.

“I help with the tickets, handing out flyers, helping them pull out tulips, and helping them bag them,” Owens says.

Poston is not letting living with an IDD as an adult define him. His leadership at Tulipalooza, Daymark Living, and his past jobs have pushed him and others in his community. His leadership with his community at Daymark and volunteering with Tulipalooza have allowed him to give back and make a difference for others. He is proud of his work, and nothing will stop him.

Poston strolls through the unbloomed garden a second time. Here, he notices more green bulbs and remembers the event will soon return.

“My role at Daymark and Tulipalooza is to be a good influence,” Poston said. “I want to help others and my community with Tulipalooza.”

SMU students across campus and in the Dallas area are engaging in new and unique ways to contribute to their communities. This is a story reported as part of a Trailblazer series by students in Annette Nevins’ Feature Writing course in Spring 2022.