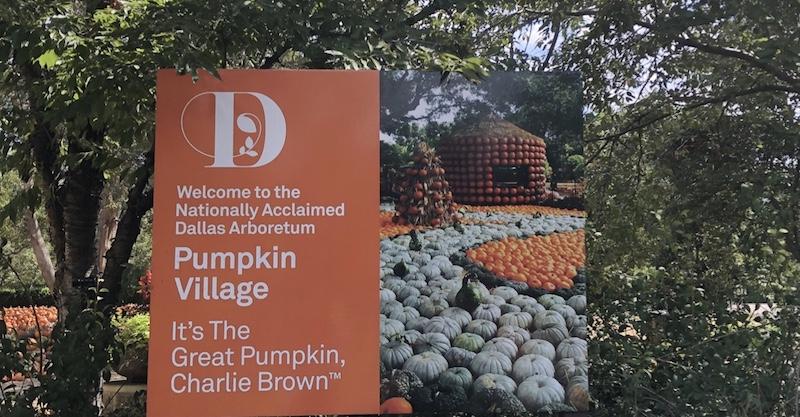 Among them, Louisiana resident Cassie Lobley visited the patch with her boyfriend.

“It’s awesome,” Lobley said. “We’re going to a concert tonight and we had some time to kill, so we decided to check it out.”

Vice President of Advertising and Promotions for the Dallas Arboretum, Terry Lendecker said they anticipate 275,000 guests for the six-week duration of the fall festival.

People of all ages can be seen smiling while visiting the festival.

This year’s Autumn at the Arboretum pumpkin patch depicts the plot of the movie “It’s the Great Pumpkin, Charlie Brown” through topiaries of the characters, houses made of pumpkins and 150,000 autumn flowers.

The festival, includes the Pumpkin Village made up of pumpkins, gourds and squash, as well as the hay bale maze adjacent to the displays. The Pumpkin Village’s numerous pumpkins attract yearly attendees like William Rogers and his family who have a membership to the Dallas Arboretum.

“I’ve been told 90,000 plus pumpkins,” Rogers said. “We try to bring the family with us when they’re here and everybody enjoys it; they love coming here.”

Attendees can walk around the Pumpkin Village snapping photos of the Peanut Gang displays. Charlie Brown, Peppermint Patty and Marcie are some of the characters featured behind the movie’s famous brick wall display. Attendees can also purchase Charlie Brown themed souvenirs and pick pumpkins to carve at the gift store cart located across the patch. The prices for the pumpkins range from $4-$11.

The Dallas Arboretum’s Pumpkin Village has received many praises throughout the years including being named one of “America’s Best Pumpkin Festivals” by Fodor’s Travel and being included in this year’s “The Best Pumpkin Patches to Visit This Fall” by Martha Stewart.