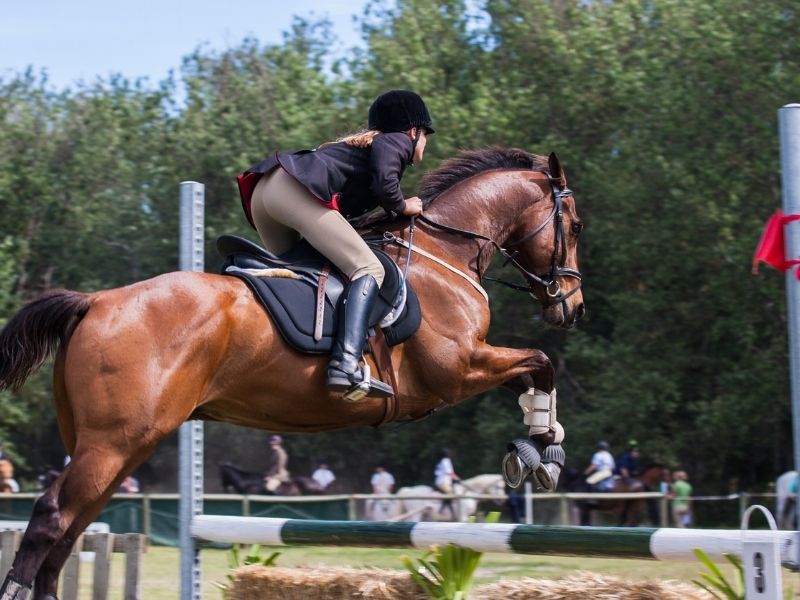 Outside the SMU stables sits Callie, a young thoroughbred, who sticks his nose out of a stagnant trailer in curiosity. The gelding clumsily stumbles, revealing a soundness defect and the reason for his arrival on the Hilltop. Any trained rider can tell Callie is unfit for competitive riding, which is why his owner – currently deliberating the final details of Callie’s donation to the school’s equestrian program – is about to receive several hundred dollars in a tax write-off.

After winning their fourth-straight conference title, SMU’s equestrian team will vie for a national title on Thursday, April 14 in Florida. Despite the team’s history of blue-ribbon wins, the mechanics of college riding is largely ignored.

Half of the battle for the equestrian riders is performing on a variety of donated horses – most of which have health issues, lameness or general unsoundness. The horses in the university’s pen often come from donors who realized their equines won’t compete well in the professional circuit.

“I donated one myself; it was my grandmother’s old horse, Bobby,” senior Western rider Mallory Vroegh said. “He did okay in the show pin, but he wasn’t anything spectacular. The main problem with Bobby is that he needs to be taken to the vet once or twice a year to get an injection in his leg.”

Most women on the team came into university with extensive experience competing on a single, perfectly healthy horse. In college, riders draw from a pool of horses (either away or at home) to exhibit their skill while adjusting to problem horses.

“A couple of months ago, I drew a horse that I’m not particularly comfortable on,” Vroegh said. “He’s a good horse, but the quirks that he has are the things that make me nervous about horses. He doesn’t sit in the bridle well and likes to float around and not focus during showing. But during those 45 seconds of warmup, he was being so good. I thought, ‘I think he’s going to be here for me today,’ and in that moment, I fully trusted him.”

“English and Western are completely different, from the clothes to the horses,” junior jumping seat Addi Piper said. “We had a ‘switch week’ during our canceled Covid-19 season, where we actually got to learn horsemanship and dress up in their gear.”

The value of some thoroughbred horses on the Hunter side run over $1 million. Comparably, top-of-the-line Western breeds – typically quarter horses – sell for $300,000 at most.

“The Western girls were all trying to help us put on makeup, and we were trying to find helmets and boots that fit them,” junior jumping seat Alex Pielet said. “It’s so funny how we all ride horses, but we have no idea about the other disciplines – I couldn’t believe how dizzy I got from all the spinning when I tried reigning, and that’s all they do every day.”

Each rider takes care of a designated horse to maintain the health and well-being of the equines. Several within the equestrian industry tend to donate older horses since the collegiate circuit often demand less from the animals.

“We have one horse at 19 years old – she’s probably been here for eight years,” Piper said. “We’ve unfortunately also seen horses die in the program. Our facilities weren’t properly equipped when it froze over last winter, and it’s hard on the horses when the weather changes like that fast. One of our top horses – Santos – got sick. There was only so much we could do. They get so close to our heart; they’re as much our teammates as the humans.”

The school hosted several double-meets and triple-headers at home. This gave the team a home advantage but caused more stress and less time for the horses to rest. The team went 10-6 overall and won the Eastern College Athletic Conference title for the second consecutive time on March 26.

“In college riding, people cheer for you from the moment you enter the arena to the moment you leave,” Pielet said. “There’s this horse called Hamilton, and all my friends call me ‘Pie.’ So, they’ll yell things like, ‘Pie and ham, what a great sandwich – an even better dessert,’ and then I’ll start laughing up there. It’s definitely what makes it fun and keeps me going.”