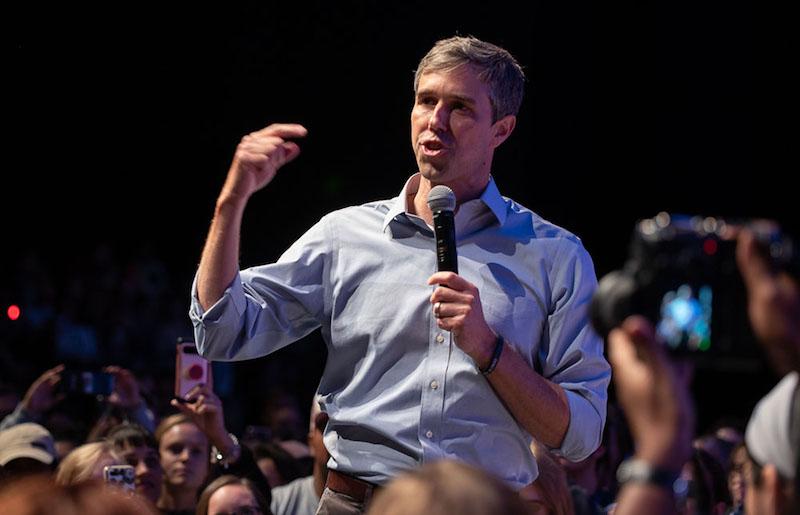 Editor’s note: The following was written by Lauren Rangel, contributing writer for the Daily Campus.

Tonight, @BetoORourke is holding the #RallyAgainstFear while @realDonaldTrump rallies his supporters in Dallas. I’ll be covering the story live all night! @keranews Here are the lines to get in: pic.twitter.com/7Qtds2vQWk

Among the speakers were several U.S. Senate candidates such as Christina Tzintzun Ramirez. As a Mexican American, she decided to center her speech around immigration. As the crowd cheered, she told President Trump, “If you come for our family, we come after you and vote you out of office.”

Several guest speakers, including candidates running for Senate, take the stage at the #RallyAgainstFear before @BetoORourke takes the stage. @AmandaForTexas @keranews pic.twitter.com/GsvrJPCPwR

Before beginning his speech, Royce West, another U.S. Senate candidate, paused the rally for the second moment of silence that night to honor Elijah Cummings. On October 17, Elijah Cummings, a member of the House of Representatives, died at age 68 from long-term health problems. As West silenced the excited crowd, he noted that “we gotta remember our giants.”

Moments before Beto appeared, Reverand Dr. Michael Waters walked on stage with a group of nearly 50 people holding Beto signs. A silence fell over the crowd as he talked about the lives that were lost due to domestic terror incidents and hate crimes. To end his speech, Water challenged the audience to “stand against racism, stand for America”. With the whole auditorium on their feet, he asked “Will you stand? Will you rebuild our nation?” and he then handed over the crowd to Democratic candidate Beto O’Rourke.

“I am so proud of you.” @BetoORourke enters the stage at the #RallyAgainstFear. @keranews pic.twitter.com/9vdauMncqx

At 8:21, Beto welcomed the audience in Spanish and English. He thanked the chanting congregation for their support by noting that “at this critical moment for our country… it gives me so much pride and I’m filled with so much gratitude to see so many good people… coming together”. In a display of opposition to President Trump’s rally in Dallas, O’Rourke exclaimed that “we are here tonight to show the country to stand up”.

Overall, the Democratic candidate focused his speech on overcoming three different types of fear. The first fear is the fabricated fear of the president. Beto noted that Trump “wants us to be afraid of one another”. As an example, he claimed that Trump’s description of “Mexican immigrants as rapists and criminals” is rhetoric created to classify “one people, of one religion” as “inherently dangerous or disqualified or defective”. Instead of asylum seekers finding salvation at the U.S. border, “they found their worst nightmare because this president described them as an invasion”.

. @BetoORourke is covering topics such as immigration rights, education, veteran rights, and LGBTQ+ rights by reiterating that he understands their fear. @keranews #RallyAgainstFear pic.twitter.com/cGjQyoGDZy

Lastly, he admits that although the future is counting on us to defy fear, it’s easy to be afraid of a failure to do the right thing “because it is not popular, because it does not poll well, because it does not follow our status quo or the political conventions of the day.” Beto asserted that the only way to defeat fear is to “stand up for the right thing, regardless of the political consequences”. He called the audience to action by encouraging support for his positions on universal healthcare, immigration, legalizing abortion, and foreign policy.

In the end, Beto exclaimed that “we are the answer to that fear” and “this country was not built on fear, no, America was built on courage.” As he wrapped up his final words, Beto O’Rourke cheered, “Texas are you ready? Let’s get after it!”

With the crowd captivated, @BetoORourke ends #RallyAgainstFear with the statement “Texas are you ready? Let’s get after it!” @keranews pic.twitter.com/7fS0AdnJm4