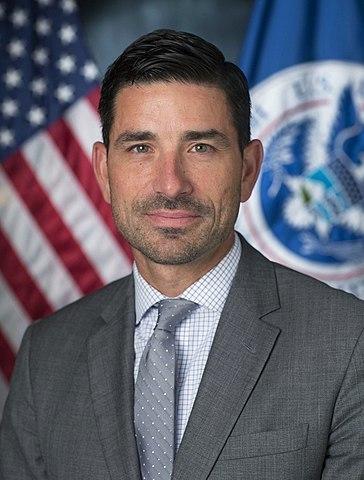 Earlier this month, Wolf approved the deployment of federal officers in Portland in response to demonstrations outside a federal court building. Since then, viral videos that show federal officers detaining protestors and taking them in unmarked vehicles have garnered criticism and condemnation from the public, city and state politicians, and a former DHS secretary.

Wolf established the Protecting American Communities Task Force (PACT) in response to President Trump’s executive order for “Protecting American Monuments, Memorials, and Statues and Combating Recent Criminal Violence.” The task force, which is reportedly made up of federal officers from agencies such as Border Patrol, is intended to “coordinate Departmental law enforcement agency assets in protecting our nation’s historic monuments, memorials, statues, and federal facilities,” according to the DHS.

Portland Mayor Ted Wheeler says the “paramilitary” force deployed in Portland is responsible for escalating tensions, and has asked them to leave the city. Wolf’s other critics include the director of SMU’s Center for Presidential History, Jeffrey Engel, who described Wolf’s actions as “precisely the type of tyrannical deployment of power that the Founding Fathers were specifically worried about,” in an Independent article.

This headline and others like it are grossly inaccurate & irresponsible.

Our officers are not "paramilitary." They are civilian law enforcement doing their job — enforcing federal law.https://t.co/BFbKVw9O12

Wolf has pushed back on the use of the term “paramilitary,” and insists that the forces “are civilian law enforcement doing their job — enforcing federal law.” He says the mayor has “legitimized criminal behavior” and that Portland has uniquely failed to respond to “lawless anarchists” at these demonstrations. As a result of this lack of “local support,” Wolf said it was necessary for the officers to “proactively arrest individuals,” in a Fox News interview.

Wolf stands by the legitimacy of his actions. After Fox News senior judicial analyst Judge Andrew Napolitano claimed Wolf’s actions were “unlawful, unconstitutional and harmful” in an op-ed, Wolf responded to Fox News and said, “[w]e [DHS] do not need an invitation from the governor or the mayor.”

President Trump is expanding on his administration's move to send federal agents into U.S. cities.

Acting DHS Secretary Chad Wolf (@DHS_Wolf) discusses federal intervention in Portland and other cities, and responds to the criticism surrounding the decision. pic.twitter.com/efbB5eLAef

Wolf grew up in Plano, and attended Plano East Senior High School. He then attended Collin Community College on a tennis scholarship before going on to SMU and studying history.

“I didn’t grow up in a military family, but studying history and political science in college drove that service in me,” Wolf told The Dallas Morning News in June. “When I took my first job in DC, I was thinking I would spend a handful of years doing something meaningful, but 9/11 changed everything. The world changed that day, it made me realize how I wanted to focus my career in something impactful and meaningful,” he said.

Not long after graduating from SMU, Wolf became the assistant administrator for transportation security policy at the Transportation and Security Administration (TSA). He then went on to become a lobbyist for a firm called Wexler & Walker where he spent 11 years lobbying on behalf of clients like Analogic Corp, a security technology corporation, to secure contracts with the TSA.

In 2019, Wolf was sworn in as Acting Secretary of the DHS and confirmed as Under Secretary on the same day in order to avoid an unconstitutional violation of the Federal Vacancies Reform Act of 1988.