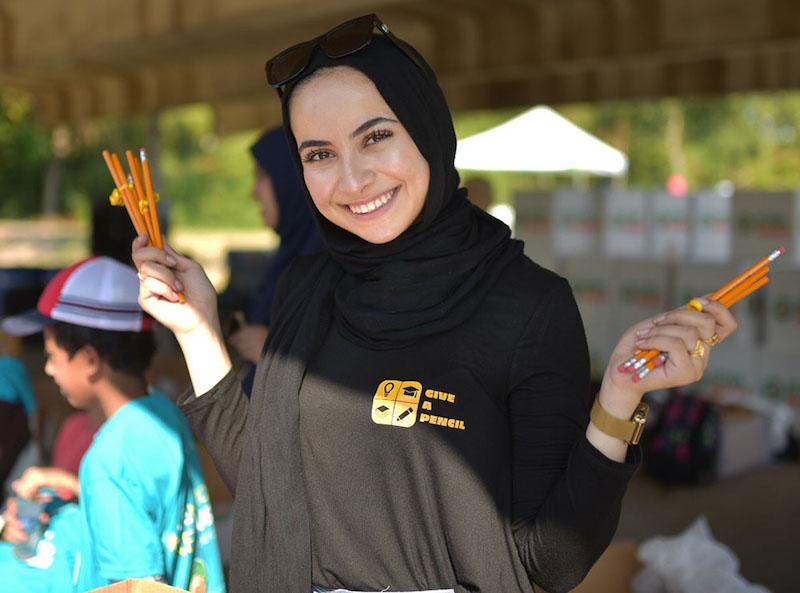 Sanaa Ghanim arrives early in her first class of the semester. She made sure to set her alarm clock five minutes earlier than usual before going to sleep the night before. While she scans the lecture hall for an open seat, she quickly notices that the front row is mostly empty. Many students opt to sit in the back, especially during early classes like this one. But not Ghanim. She eagerly slides into the front and center seat, pulls her laptop out of her bag, and waits for the professor to start the lecture.

Ghanim pushes herself to learn as much as she can in class. While she cherishes the opportunities that Southern Methodist University provides her in the classroom, she is active around campus as well.

This year, Ghanim was selected to represent the Human Rights Program in SMU’s Homecoming celebration. This program is relatively small compared to the other organizations participating in homecoming, and she is the second candidate that the program has ever endorsed. While having fun is an important part of her campaign, she is focused on a broader issue.

“I hope to make it clear that you don’t need to be part of Greek or look a certain way to participate in homecoming,” said Ghanim. “Every student at SMU is a vital component of the university and deserves to feel as though homecoming is an event for them to holistically participate in. It isn’t enough to admit a diverse body of students: we have to actively work to ensure that every student on this campus feels included.”

“Sanaa was chosen to represent the SMU Human Rights Program in Homecoming because she is a proven leader and a positive influence on campus,” said Dr. Bradley Klein, Ghanim’s mentor. “As a young woman of color and an immigrant, Sanaa has first-hand knowledge of the injustices faced by many people in this country and beyond. Yet, she believes in the possibility of a better world and is using her skills to help build it.”

Ghanim was born in a village called Silat al-Dahr in the West Bank, an occupied Palestinian territory legally controlled by Israel. Everyone in the village knew each other, and they often bought goods from one another. Her father raised chickens and sold eggs for a living.

“It’s different from the United States in that the West Bank is underdeveloped,” she said. “However, the sense of community is unmatched there. It will always be home to me.”

Ghanim’s family won the Green Card Lottery in 1999. She was very young when she migrated with them to the United States. Countless families across the world long to chase the economic prosperity and educational opportunities that characterize the American dream. Any family can apply for the Green Card Lottery if they meet the basic requirements. However, the lottery is drawn at random. It often takes families numerous years to win if they are drawn at all.

The transition was hard on Ghanim’s family of seven. They settled in a three-bedroom duplex in Arlington, Texas, and her father worked 15-hour shifts at $6 per hour at a local family-owned mechanic shop.

“I was young and didn’t understand the context of everything that was going on, but I picked up on how the move was affecting my family,” she said. “My parents didn’t know English, and navigating a new school system for my siblings and I was especially difficult for them.”

At times, she believes that the transition never really ended. She feels that her family isn’t welcomed in this country because of their identities as Muslims and ethnic minorities. However, her parents continue to emphasize the importance of never losing sight of who they are and where they came from. They still embrace Palestinian culture through language, food, and tradition.

“Holding onto my Arabic language is probably one of the most valuable ways that we hold onto our culture,” she said. “Language is powerful and it allows me to connect with people back home and stay up to date with everything going on in the West Bank through social media. Any chance that I get to embrace my Palestinian heritage, I do it.”

For as long as she can remember, Ghanim knew that she wanted to be a human rights attorney. She transferred from University of North Texas in the middle of her sophomore year in 2018 to join the Human Rights Program at SMU. SMU is the only university in the south that offers the Human Rights major. She enrolled with majors in Human Rights and English with a minor in Arabic. Longing for a sense of community, she was immediately drawn to the Human Rights associations on campus as well as the Muslim Student Association.

“I’ve known Sanaa since we were four, and growing up, I’ve always admired her strong personality and sense of self,” said Sara Saleh, one of Ghanim’s closest friends. “She always knew what she wanted to achieve, and she is very passionate about her field of study.”

Ghanim worked as a youth coordinator at Mothers Against Drunk Driving. She traveled to various schools in Dallas to talk about their mission, and she often brought small gifts to give to the kids whom she spoke to. One day, a guidance counselor asked if she could bring pencils and notepads to give to the kids throughout the year whose parents couldn’t afford to purchase school supplies.

“I realized that there are far too many students who are disadvantaged solely because they don’t have access to tangible resources required for school,” she said. “I participated in the SMU Big Ideas Competition in 2018 and won $5,000 to start a nonprofit organization dedicated to allocating school supplies to Title 1 schools in North Texas.”

This grant, along with donations from the Dallas community, enabled Give a Pencil to allocate school supplies to 500 refugees, 750 students, and 30 public school teachers last summer.

Ghanim’s passion for human rights research bloomed as she continued to become more active in the program. She was awarded four research fellowship grants to pursue an applied research project to measure, analyze, and critique the role of education in shaping perceptions of the longstanding Israeli-Palestinian conflict.

“Sana’s research gives me hope for my home, Palestine,” said Esra Ghanim, Ghanim’s younger sister. “I look up to my sister because she really shows me that anything is possible.”

The Human Rights Program also gave her the confidence to take on leadership roles in various clubs on campus. She currently serves as Dedman Senator for Student Senate, Finance Director for the Human Rights Council, Programming Chair for FEM, Vice President of the Muslim Student Association, and President of Mortar Board.

“It means so much to me to represent the Human Rights Program because it became my place on campus when I was scared of fitting in,” said Ghanim. “Representing the program gives me the chance to give back to the community that accepted me for who I am the first day that I started at SMU. We want our students to feel that they have a place in Homecoming, and participating is a great way to come together.”

As Ghanim prepares for her first day of law school next year, she will set her alarm clock a couple of minutes early. The front and center seat represents more than her drive to succeed and push forward in this country: her survivor’s guilt wouldn’t allow her to sit anywhere else.