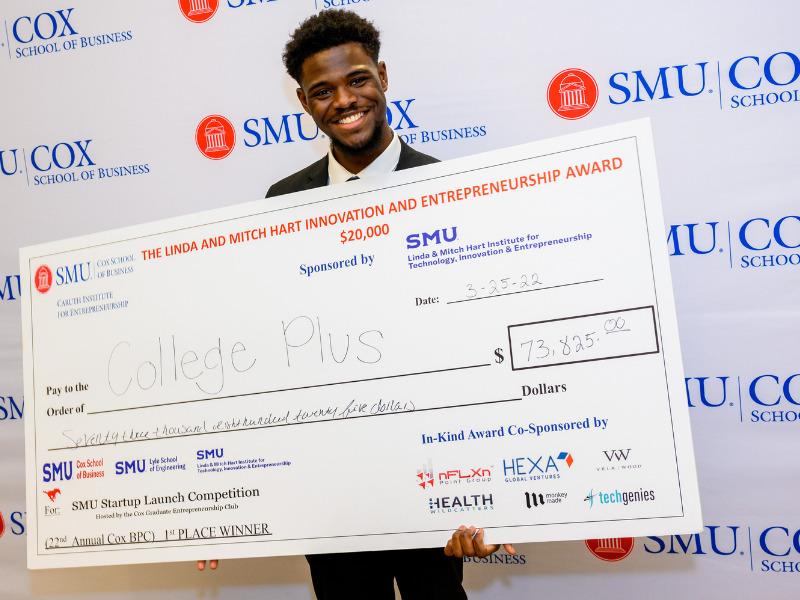 CollegePlus, an app for students going through the college admissions process, won first place and $73,825 at SMU’s 22nd annual business plan competition, held on March 25 by the Graduate Entrepreneurship Club.

Seun Suberu, a Computer Science and Statistics major and the creator of CollegePlus, said the app is designed to “help students take control of their future” by providing resources, mentors, and personal guidance in the college admissions process.

Suberu and eight other individuals and team finalists competed for “non-dilutive” cash prizes and in-kind donations, meaning the students could accept the funding without having to give up equity or ownership in their businesses.

One particularly unique pitch was Horizon’s Edge, a company hoping to produce a safe and visually stunning electric aircraft. The founder, Hunter Gore, has a degree in aerospace engineering and graduated from SMU’s Master’s program last year. Gore received the Tech Startup award and won $1,000 to help expand his company.

Hubert Zajicek, co-founder, partner, and CEO of the healthcare seed accelerator Health Wildcatters, served as the moderator for the event.

Judges rated competitors on criteria including how well finalists understood their businesses and competitor landscapes, how clear the pitches were, the need for the products, and the complexity of the business models.

In his winning pitch, Seburu said “data is very valuable these days,” which is why the company’s primary source of revenue will come from selling collected data to universities and high schools, with students’ best interests in mind.

During his acceptance speech, Suberu spoke about the doubts he had while in his bedroom coding the app “from breakfast to dinner.” He said he contemplated giving up because he is an introvert and didn’t think entrepreneurship was for him.

The 2nd place winner and recipient of $44,325 was Borrow, LLC, a platform for people to rent and borrow different items from sellers that use the application.

The founder, Katie Lewis, says that borrowing is typically viewed as a one-sided transaction without terms and conditions, but her application provides a symbiotic relationship for both the seller and the borrower.

The MBA candidate plans to implement the platform as a B2B (business-to-business), meaning transactions will occur between two businesses, rather than a business and individual consumer. This is so that the company can focus on finding a “sticky client” that will provide products for users to borrow, from there she hopes to move into B2C (business-to-consumer) eventually.

Opal, the company’s health communication device, promotes healthy handwashing practice as the LED screen lights up with helpful indicators on how to properly wash your hands for the 20 seconds necessary to remove harmful germs and bacteria.

In 2018, the MBA candidate created the first version of Opal and was able to keep refining its design and interface by testing it across multiple schools. The third and final version was created in 2020 and is an industrial-grade device that Akande hopes to implement in schools and public restrooms across the nation.

Gore, the Horizon’s Edge founder, took home the fourth and final prize of the competition. Gore currently operates the startup on his own and works as an Operations Analyst at Lockheed Martin in Dallas.

The aircraft Gore designed is Dragonfly, a single-seat, all-electric aircraft that tilts its wings up for vertical take-off and landing, and forwards for lift and range extension.

Gore hopes to raise $50k in his next round of funding to build a prototype, and then raise $500k to start production. While the aircraft is purely for recreational use now, he hopes it will eventually be used for commuting purposes.

While it did not win an award, Spiked is unique in that it provides vitamins, minerals, and antioxidants from the prickly pear cactus, which Ellefsen says is a comparable source to how coconut water was about a decade ago.

SMU Alumnus Adam Siepker (’20) discussed OrcaChat, a data-driven platform that provides business intelligence alerts that eliminate the need to monitor dashboards. When something important happens with its data, the company will receive an alert through an application like Slack, email, or Microsoft teams.

“We see data being more social, so sending that in social areas is important to get those updates,” Siepker said.

Siepker says this empowers companies to make proactive, rather than reactive, decisions and OrcaChat is “focused on the function of customer success teams” rather than specific industries.

McMahan says her app is different from competitors like Bumble BFF in that The Social Panacea is not connected to a dating app, it is strictly for making friends.

She will use the “Facebook method” approach in initially targeting the app’s design and interface towards college-aged individuals (18-24 years old), and later expanding to all ages.

Forty percent of Americans in the stock market don’t know their own portfolio application. Truppelli and Lux created the platform to combat the knowledge disparity between retail and institutional investors.

SMU Freshman Jude Lugo spoke about Commerce Navigator, a tool to help individuals start, scale, and automate their e-commerce business. According to Lugo, e-commerce is a booming industry, “but only booming for the nimble.”

Commerce Navigator provides a “one-stop solution” that consolidates the different applications sellers might need to assess their business’s health and continue to grow it. Some of these applications include order management features such as inventory tracking and order fulfillment.