Kendall Lockhart was on the road Aug. 18 in her packed car, heading from Houston back to Dallas to start her junior year. She was looking forward to the nice apartment she would be living in.

But then her phone buzzed with an email from SMU announcing that mold had been found in the Daniel House, an on-campus apartment for upperclassmen like Lockhart. She would have to be relocated immediately—and at a higher cost.

“I was really confused on how they had just discovered this the day before move-in day,” Lockhart said. “I had an SUV full of items and freaking out about where I was supposed to live.”

The search for affordable, off-campus housing is a problem most college students face. For Lockhart and her two roommates, the prices of three-bedroom homes around campus were pretty shocking.

After scrambling to find an apartment when Daniel House fell through, the women ultimately decided on an apartment just north of campus on Rosedale Avenue. The landlord gave the three women a discounted price of $2,500 since they signed the lease after the school year began. However, when their lease is up in May, the rent will return to its original price of $4,000.

The women will likely be on the hunt for another house, said Lockhart, since that price is too steep for their wallets.

The current rent price for a two-bedroom home near SMU is $3,334 per month—double the average rent price for homes in the U.S. One-bedroom apartments around campus range $1,200-$1,500. These prices are particularly difficult for students living alone to pay.

President of Kent Development Co. and licensed real estate agent Austin Kent said that rents are up because so many people are moving to the area.

“The housing market is booming right now with favorable demographics, particularly educated millennials,” Kent said. “The surge in demand for housing has caused prices across all of DFW to spike.”

Last year, the U.S. Census Bureau indicated that more people moved to the DFW area than any other metro area in the U.S.—more than 140,000 people. According to those numbers, 393 residents move to the metro area per day in one year.

New residents and SMU students are looking to purchase the same units. However, housing market inflation is making it difficult for SMU undergraduates, recent graduates and millennials moving to Dallas to find affordable and convenient housing, especially if they live alone.

Senior marketing major Richmond Dewan is seeing it firsthand. Even after using online sites and connections, he struggled to find the balance between value and price. Apartments that met his requirements were far over his budget. He was forced to weigh his options.

“I would find the perfect apartment, but then it was nowhere near my price range,” Dewan said. “My apartment now—is it everything I wanted? No, but for the price, it’s the value I need to make it work.” 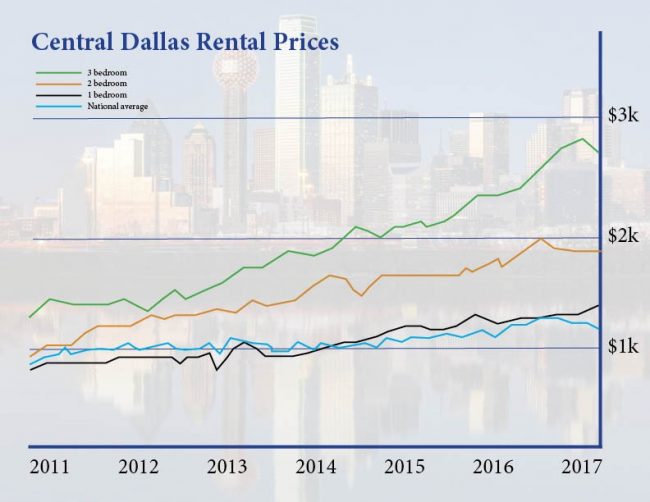 Rent prices near Texas Christian University are much less than those near SMU. TCU is located an hour west of Dallas in Fort Worth. It is a very similar university to SMU, but Fort Worth has a very different housing market from that of Dallas.

A single-bedroom house to rent around TCU, for instance, ranges $600-$800, which is 50 percent less than what SMU students pay around SMU.

Many students prefer to live near their university for walking convenience since having a car is an added expense. However, for SMU students who want to live in popular Dallas neighborhoods such as the downtown area, Uptown and Oak Lawn, rents in high-rise condos cost even more than housing near the university.

In her senior year, fashion media major Madison Cansler decided on a high-rise building downtown: The Jordan. She previously lived in a two-bedroom home near campus and paid $800 per month but wanted to move closer to downtown. The view and location may be worth it, but they do come at a premium cost.

“I moved into a one-bedroom facing
downtown,” Cansler said. “My parents don’t mind paying $2,850 a month because
it’s guarded and a safe place to live.”