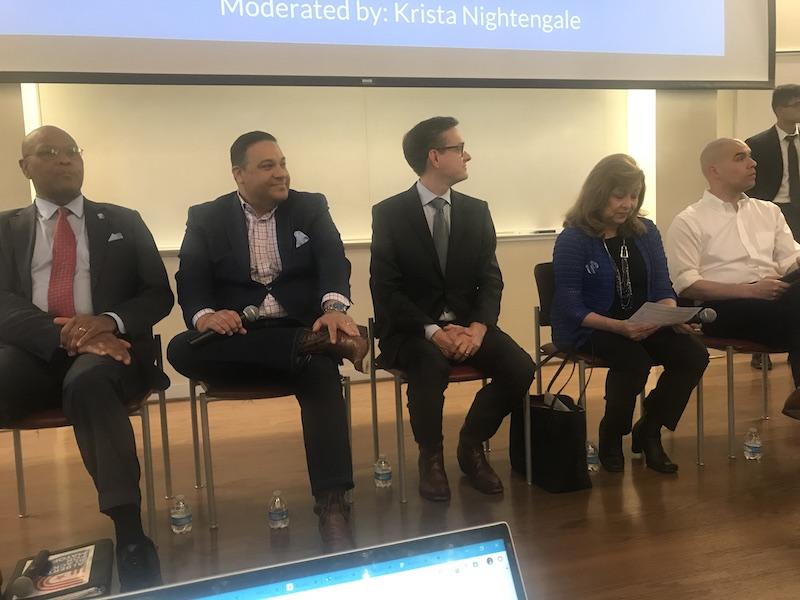 Six of the nine candidates running for Mayor of Dallas participated in a forum on Monday at SMU’s McCord auditorium. Current Mayor of Dallas, Mike Rawlings, has reached his term limit, and Dallas will elect his replacement on May 4.

When asked about Dallas District Attorney John Creuzot’s new criminal justice policies, some candidates showed disapproval. DA Creuzot announced these new reforms last week. Faithful to the promises that got him elected in November, they attempt to address mass incarceration and decriminalize poverty in Dallas County.

One of the policies to stop prosecuting first-time misdemeanor marijuana offenses. For a repeat offender, they will now have the option to participate in diversion programs to help clear the charge. DA Creuzot’s other changes concern probation, trespassing, theft, and bail practices that hope to minimize the racial and economic disparity in our criminal justice system by refusing to prosecute low-level crimes.

On Monday, a few Dallas Mayoral Candidates showed concern over these new policies. Miguel Solis, Scott Griggs, and Jason Villalba pushed back on the DA’s policy to no longer “prosecute theft of personal items less than $750 unless the evidence shows that the alleged theft was for economic gain.” Solis said, “if you decriminalize petty crime you’re opening up the doors for people to do that crime.”

Scott Griggs shared Solis’ sentiment, and added an additional concern over a possible increase in the already prevalent cell phone theft in Dallas. Villalba was outraged about the new policy and called it “a license to steal.” He called for widespread public condemnation of this policy, claiming DA Creuzot “cares more about the people that are going to steal from you than your family.”

These candidates aren’t alone. Governor Greg Abbott expressed his dissatisfaction with a tweet, accusing the DA of stoking crime and promoting redistribution by theft. On Wednesday, one of the largest police unions in Texas joined the voices of opposition and condemned the DA for endangering small businesses and encouraging more crime.

Dallas Co. District Attorney stokes crime by refusing to prosecute theft of personal items worth less than $750. If someone is hungry they can just steal some food. If cold, steal a coat. Where does it end? It's wealth redistribution by theft. #txlege https://t.co/dqfYogr4NX

But not all the Mayoral candidates were critical. Albert Black and Regina Montoya believed DA Creuzot’s policies were headed in the right direction. They shared the beliefs of many grassroots organizers across the city who have been working for years to advocate for racial and economic justice in Dallas County’s broken criminal justice system.

The DA responded to the criticism in a public statement on Wednesday, clarifying “the policy is that this office will not prosecute individuals who commit thefts out of necessity based on hunger and poverty.”