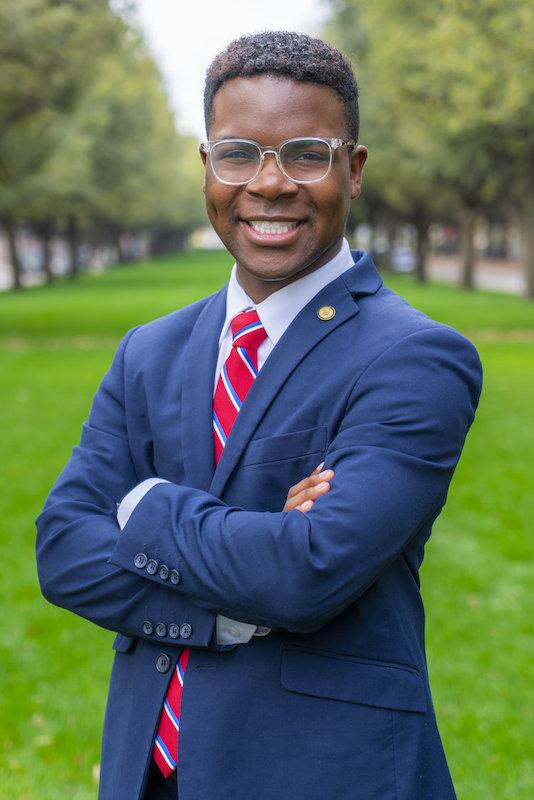 Formerly a pre-major senator and a Dedman senator, Darian Taylor is currently our SMU Senate secretary. He hopes to have your vote for student body president.

His platform has four main points: Let’s be Healthy, Let’s be Safe, Let’s Be Informed, and Let’s Have Fun doing that.

Let’s be Healthy
-Increased mental health awareness. Taylor noted the recent passing of a student to suicide. “If he had a support system behind him and he knew resources were out there to help him process that, we wouldn’t have lost him,” Taylor said.
-Update equipment at the Dedman Recreation Center
-There’s a natatorium across 75 that is only open to swimming and diving. Taylor thinks this natatorium can be open for the general SMU student population for some time when the Swimming & Diving team are not practicing.

Let’s be Safe
-Increase the number of Blue Light emergency systems on campus. Taylor said you should be able to see the next system within sight while walking around campus.
-Work with Facilities to ensure campus is safely lit. This would go beyond the annual lighting walk where students and staff walk around at night and note what areas need better lighting.
-Self-Defense Classes: work with SMU PD and Group X to offer more self-defense classes. This would be a continuation of what Student Concerns did this year.

Let’s Be Informed
-Expand student advisory boards
-Update the SMU Senate website so information is more accessible and interactive for site visitors.
-Have the ability to see on the senate website which way your particular senator voted. Right now, all you can see is whether a bill passed. Taylor said they’d record whether your senator voted “yay” or “nay” on a particular bill.
-President’s Round Table: A conversation between Taylor and students from different groups to collect feedback and ideas
-Presidents’ Circle: A conversation between the presidents of SMU organizations and Taylor. This would join all the leaders in the room and give a birds-eye view of what can be improved for SMU organizations. This meeting would be once every two months or so. “Every president has information on what we could do. When we come together, that’s a force to be reckoned with on this campus. That’s one thing I learned.”

“Every president has information on what we could do. When we come together, that’s a force to be reckoned with on this campus. That’s one thing I learned.”

Let’s have Fun
-Improving the new Boulevard experience
-More Spring events–most events are in the fall to acclimatize students to the new school year. Taylor believes more spring events need to happen like the “First 5” that happens in the fall.

Track Record
-As Student Body secretary, Taylor recorded minutes and made sure the administrative side of senate was working well.
-Taylor worked on comprehensive committee reform, which he says is the largest legislation bill Senate has done this year. It restructured committees to make sure they’re in alignment with one another and increased efficiency.
-He made sure Senate updated students on any changes to the Student Code of Conduct. He chairs the Code revisions committee.

You can learn more about Taylor on his website.

Taylor runs unchallenged for the position of student body president. Elections go on until Thursday, April 5 at 5 p.m.