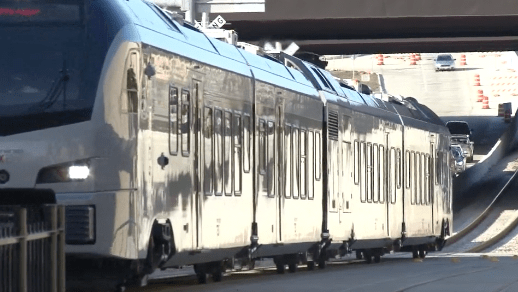 For people who are tired of calling expensive ride shares or think the dart is a bad deal.. now theres an answer.

After a slight derailment because of signal lossess and the government shutdown… Texrail trains are now operating, taking thousands of Tarrant County citizens to and from their destinations daily. Since the new Texrail commuter train service opened in January, a lot has been said about how convenient it is to get from many areas in the DFW area to DFW Airport Terminal B.

“Well we’ve been getting traffic.” Said Marcus Ortega, a customer service representative for American Air, who operates at Terminal B. “Recently we’ve been getting people who just want to ride the train to get a feel for it but we do have a lot of people from other terminals checking in here, so its affecting our lines, but we’re always accommodating to any questions that anyone has.”

“Theres actually a lot of benefits,” Said A conductor of one of the trains. “A lot of people are enjoying having this as a way to get back between downtown Fort Worth and here at the airport”

The ride is pretty fast to get me at the station I’m going to get off at north Richland hills.” Said Melissa, a Tarrant County resident riding the Texrail. “It’s efficient, comfortable and convenient when it works out.”

But it hasn’t always been working out. Just like all new technology, Texrail has had some growing pains, and customers have had some troubles paying for tickets.

“If anyone has trouble with the kiosk they need to let us know and literally let the conductor know and we’ll take care of it.” Said Brian Murnahan, a spokesperson for Texrail.

But what about love field?

While there is currently no plan to add the smaller airport to the Texrail’s route, there are still a few ways to use Texrail to get to the southwest hub.

“Having a regional train like this that allows us to connect downtown fort worth to the transportation of the metroplex to DFW airport… And walk 200 yards to continue on to love field just gives us to many more options,” Said Murnahan.