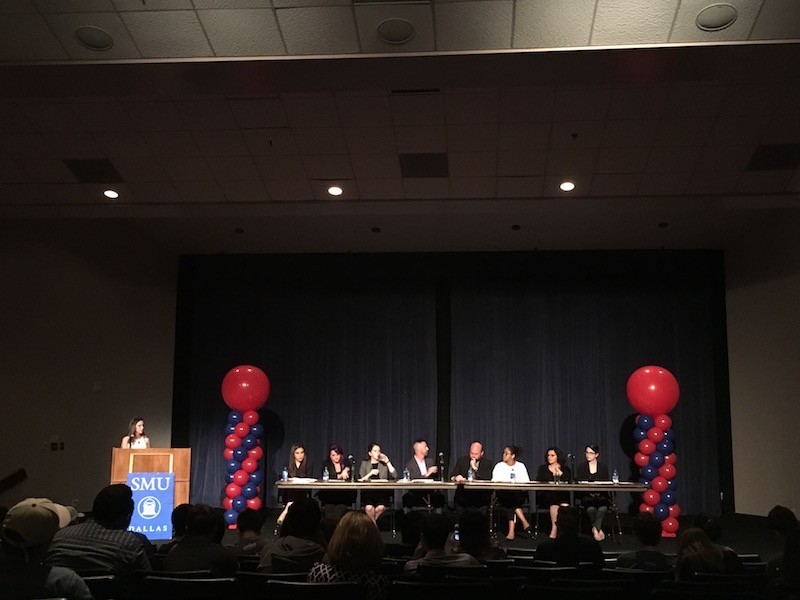 The panel was intended for people with views representing both sides of the on-going abortion debate to find common ground and gain empathy for the others’ views, according to FEM President Julia Cantu.

“What are we going to do as Americans to protect the health of women and to reduce the number of abortions?” Cantu asked—the most prevalent question on abortion in 2017.

The topic of abortion contains many sublayers and questions that reveal our values relevant to the subject. Some of these layers include at what point a human life begins, what necessary policies can reduce the number of abortions, the role of women’s healthcare and Planned Parenthood and the role of the father’s rights.

Each member described the reasoning behind their stance on abortion.

“I am definitely one of those children who probably should have been aborted,” New Wave Feminists representative and pro-life partisan Destiny Herdon-De La Rosa said.

Her mother became pregnant at 19 years old. “She’s the reason I’m a feminist,” Herdon-De La Rosa said. “Seeing the amount of strength it took for her to choose life for me is just incredibly bada*s.”

At 16, Herdon-De La Rosa also found herself pregnant and single. “My passion is…helping women who are in the same position I was in, that my mother was in, because I know that so many women don’t have that support.”

A similar story was reflected from the pro-choice side.

Candice Russell is a freelance writer, a representative from FEM and a woman who has had an abortion, according to Russell.

“My mother was 14 when she was pregnant with me… but I grew up pretty un-parented and unsupported. I had a mother who very much regretted her decision, who had no intention of parenting.”

Like her mother and Herdon-De La Rosa, Russell was pregnant and single as a teenager. “I looked back on my life and knew what it was like not to really live, but to survive. To struggle. To raise yourself thought of as a consequence, not as a gift,” Russell said.

Russell and Herdon-De La Rosa’s similarities found common ground on some topics. This trend even extended to the other panelists.

Both sides agree that they want to reduce the number of abortions and that sex education plays a big role in that rate.

“To increase sex ed, we have to stop abstinence-only sex ed, which seems really big in Texas still,” Evan F. Stone said. Stone is from from Jane’s Due Process/Stone & Vaughn, PLLC, an organization that fights to give minors the rights to make their own decisions when it comes to abortion.

“In Russia from about 1988 to 2001, they were able to reduce abortion simply by increasing access to contraceptives,” Earland said. “Women need access to proper healthcare, and that’s the larger dilemma that that’s being denied.”

However, like all problems, there isn’t always a simple solution.

Catholic doctrine says contraceptives are immoral. The question then becomes: is there another form of adequate and effective sex education without contraceptives?

Catholic Campus Ministry member Collette LaVigne proposed the adoption system as an alternative to sex education that still reduces the number of abortions. “Our adoption system is in shambles right now,” LaVigne said.

The two panel stances reached a common point on contraceptives and sex education.

“I agree with a lot of that,” Herdon-De La Rosa said in response to Earland’s statements about increasing education and contraceptives.

Herdon-De La Rosa also mentioned another layer to the education process. “We also don’t talk about fetal development,” Herdon-De La Rosa said. “I need to be fully informed on what’s being removed from my body”—in other words, seeing a sonogram before having an abortion.

Sonograms and sex education go hand in hand with women’s access to healthcare. Planned Parenthood has a unique identity: it is a women’s healthcare provider, but getting rid of the institution is a hallmark of the pro-life movement.

“I’m very passionate about making sure women do have access to healthcare,” Herdon-De La Rosa said.

“As a pro-life woman, I hate that I was expected to go to an abortion provider for my healthcare just because I can’t afford insurance,” Herdon-De La Rosa said. “I’ll leave it up to you to see if there’s a bit of conspiracy in that.”

“It’s horrible that Texas women are forced to go to Planned Parenthood for their healthcare,” Russell said. But it shouldn’t be thought of as “the abortion provider,” she said.

“Taxpayer money, legally, is not allowed to go towards abortion. The Hyde Amendment has cut that from happening,” Russell said.

“Planned Parenthood…performed over 330,000 abortions on an annual basis,” Matthews said. “I get that the Hyde Amendment says that this almost $500 million of taxpayer dollars that is going to Planned Parenthood isn’t supposed to go to abortion. However, anyone who runs a business knows that that is a fallacy…If someone gives me another $500 million, you don’t think that’s going to give me the opportunity to do more abortions?”

The topic of abortion became even more muddy when it comes to children and to minors. “Should a pregnant minor be required to have their parents’ permission for an abortion?” Cantu said.

For the pro-life side, the resounding answer was yes. Roe v. Wade speaks to this topic; “The court said parents can be informed if the states choose to do so. It’s ok for states to pass laws that require the parents to be informed. But, if the child doesn’t want to tell their parents, they can go directly to a judge,” Milano said.

“I think this is just bad policy,” Milano said. “[Children,] they’re vulnerable and not in a position to make this decision.”

“This is a topic I have mixed feelings towards,” Women in Science and Engineering representative Audrey Reeves said. Reeves also holds a unique position. “I changed from pro-life to pro-choice,” Reeves said.

“It has been proven that there are extremely negative biological impacts on both the mother and the child if the mother is under the age of 15…. If you think about it from a biological perspective, the mother is still growing. The mother and the child are still growing at the same time, competing for nutrition. It’s very detrimental for both of them. I do not think that any woman under the age of 15 should be forced to carry her child to term.”

According to law, 18 is the “age of majority”—though this number can vary by state. At 18 years old, an individual receives new rights and responsibilities and the right to decide on abortion without parental consent. However, a person already has rights before reaching this age.

“When does a human life deserve the rights to life?” Milano said.

“Life begins at conception. When an egg and a sperm unite, you have the full genetic makeup of a whole organism,” LaVigne said. “That one cell directs its own process of development. If you take a cell [from any other part of the body] it doesn’t direct its own functions, so, the life can’t begin when its born. But I don’t think a lot of people will try to define it that way,” LaVigne said.

“A lot of people try to define life at the point of viability, whenever a baby is able to life outside the womb…but as our technology gets better and as we are able to have children survive at earlier and earlier weeks of pregnancy, having a sliding scale of life is a very tricky place to be.”

“I actually do believe that life begins at conception,” pro-choice candidate Reeves said.

“I believe that with the current technology that we have, if you carry a baby to a certain term, that baby can survive out of the womb. However, that’s not possible at extremely early stages of conception, especially in the first trimester….The women’s right to her body trumps that of the baby’s.”

Women’s rights and the child’s rights make up another dichotomy in the discussion on abortion.

“For so long women were treated as property, so it’s appalling to me that, as feminists, we hold abortion rights and access as this pillar of our movement,” Herdon-De La Rosa said, “because we, more than anyone, should know what it’s like to be disposed of and abused, and even killed, because we are viewed as property.”

“Simply because something is legal or accepted in a culture doesn’t mean it’s right and doesn’t mean that it’s something we should accept.” LaVigne said. “Slavery used to be accepted in our culture and legal, and then we decided that it wasn’t as a country, we changed that….I don’t think that this will be changed by a court decision. I think the only way that this can be changed, that this debate is going to be closed, is if there’s a grassroots movement, to decide that abortion is no longer something we agree with, something we uphold.”

“We’re all missing classmates, aunts, and uncles, because of abortion,” Milano said.

The topic of abortion is often founded by the same intentions from both sides.

“No matter where you are coming from, there are ways to respect life,” LaVigne said.

Though polarization on the topic of abortion continues, the method to respecting that life and the life you protect—the woman’s or the child’s, which isn’t necessarily an either-or choice—can be interpreted in many ways.