I, along with many others from SMU’s Embrey Human Rights program, took the DART from Mockingbird station to Akard station Saturday morning, arriving downtown, at Dallas City Hall, a little before 10 a.m. for the beginning of the rally. A swarm of hundreds of people crowded near the building, signs held up high, and passionate reflections bounced off the glass window panes. People of all backgrounds, colors, religions, young in strollers to elderly in wheel chairs, came together, in the humid June heat for one purpose and one goal.

The introduction featured a series of speakers who each took turns lining up to express their discontent with the current political climate surrounding immigration policy. Ranging from executive director of the Human Rights Initiative of North Texas, Bill Holston, Democratic Texas state representative, Victoria Neave, to a University of Oklahoma college student, Alona Kemp, each delivered a speech about the with conviction and enthusiasm that frequently sent chills down my goose-bumped body as water filled my eyes. Kemp, whose speech emphasized the Latin phraseology that America was founded on: E Pluribus Unum: Out of Many, One, read, as her lips quivered and her voice trembled on a podium looking into a sea of thousands of captivated protesters:

Neave also took an emotional route with the delivery of her speech. Referring to the administration’s views of immigrants as an “infestation,” she spoke about the trials and tribulations that come with crossing the border. She relayed the idea that the governmental focus is too much on the illegality of crossing and not enough about the dangers, courage, and uprooting of a life one has known for so long. We frequently forget how conditioned we are as beings to cling to comfort, when change is truly the only constant. Neave continued:

After the speakers, leaders, both in the front and back of the crowd, took to the corner of Marilla St. and Akard St., loud speakers in hand, to begin the march. A series of chants grew louder and louder with police walking alongside the mob, directing traffic, and intervening between protesters and counter-protesters. Some of the chants were as follows: 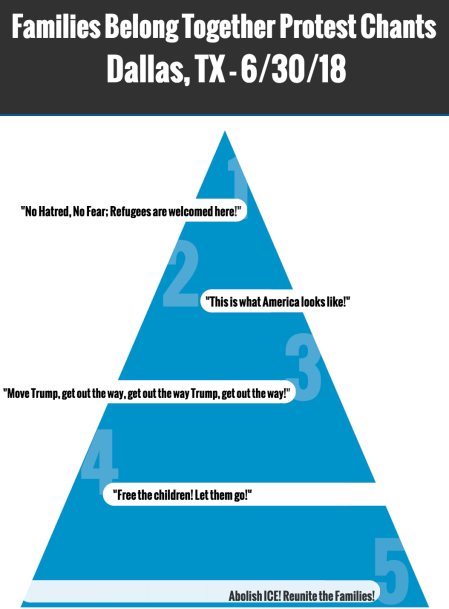 In an interview with SMU graduate, Jessica Jancose, she articulated the brutality behind America’s correlation between borders and migrants:

“It’s so cruel to deny people that right to cross. If we’re allowed to have borders, then people are also allowed to be migrants. It’s important to keep families together and it’s important to abolish ICE because you shouldn’t be detained for migrating.”

Morgan Alambert, a student from Texas State University emphasized the meaning of family in her interview. Central to the immorality of the policy, Alambert said:

“We all should have the ability to have someone embrace us, hug us, love us, whenever we need it. Family is vital because it’s one of the essentials to being human.”

With protests happening all over the country, President Trump’s Department of Justice issued a statement declaring that families will be kept together indefinitely in immigration detention while their cases are pending before the court.

Of course the question arises, for how long will they be detained and kept in these correctional facilities, but for now, reuniting families and keeping them together is a human rights win on every front and is only partial to what protesters took to the streets for.

AFTER ALL, IT’S IMPORTANT TO CELEBRATE THE SMALL WINS.