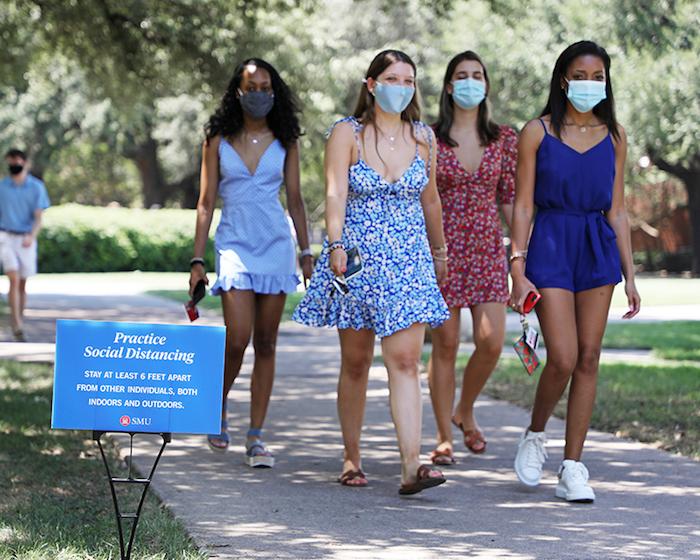 The first week of SMU’s fall semester presented many challenges for students, faculty and staff as the campus adapted to new health and safety practices, such as social distancing, virtual classes, and mandated face coverings to curb the virus’s spread. Despite the precautions, self-reported COVID-19 cases are already quickly rising, with more than 100 reported active cases barely a week after the start of the semester.

“We anticipated an increase in positive cases among students in the first few weeks and that is coming to fruition,” V.P. of Student Affairs Dr. K.C. Mmeje said. “As students settle into the semester and begin focusing more intensely on their courses, we expect to see a decline in COVID cases. We encourage students to honor the pledge to protect and make responsible decisions on and off-campus.”

The positive cases listed on the page are self-reported to the university, meaning an individual must pursue a test, receive one, and then report the case to SMU for it to be properly recorded. Unlike many campuses across the country, SMU did not mandate widespread testing for students upon their return. Instead, only symptomatic students at SMU are able to receive a test on campus.

“Students would have to call the Dr. Bob Smith Health Center who would guide them as to whether or not they need testing,” Assistant Director of Health Promotion Griffin Sharp told The Campus last month. “They would not go to the main Health Center, but would go to the side to our testing clinic.”

Despite this protocol, The Daily Campus has received multiple reports from students who claimed they were denied or challenged in accessing COVID-19 tests.

Biology major Lilly D’Addario says she essentially had to fight with health center staff to get tested after being in direct contact with someone who said he lost his sense of taste and smell — a symptom strongly associated with the virus. While the student did not feel a sense of urgency to get tested, D’Addario did.

When she called the heath center, they set her up to speak with a nurse practitioner over Zoom to determine if she should get tested.

“The nurse practitioner didn’t really seem to be paying attention and she argued against getting me tested,” the junior said. “She also said since the person I was in contact with hadn’t tested positive yet, it wasn’t necessary, but he tested positive the next day.”

D’Addario had a back and forth with the nurse, and had to push her to eventually get a test. She says it doesn’t seem like students’ concerns are being taken seriously.

“It was definitely frustrating; if I hadn’t stood up for myself and insisted on a test I wouldn’t have gotten one. I feel like another student might not have felt comfortable arguing with a nurse and wouldn’t have ended up getting a test had they needed one,” she said.

Camilia Mohamad, an RA at Mary-Hay Peyton Shuttles Residential Commons, appreciates that SMU made testing available for students on campus, but thinks widespread testing would have been a more effective approach.

“I think that the university should have required testing even though it might not be the most cost efficient method. At least testing students before they come on campus,” she said.

The sophomore says she feels like SMU is handling the situation fairly well, but isn’t as confident in the students’ ability to cooperate.

“We’ve seen some partying going on, either through social media or in our commons, but there was an end put to most of those pretty quickly,” she said. “With masks, I’ve had to give out a couple incident reports for deferred suspension, but I haven’t seen any violations of the ‘no guests’ policy yet,” she said.

However, there is talk on campus that many students are intentionally hiding or ignoring their symptoms to avoid getting on-campus classes shut-down.

“I’ve heard that at other residential commons, some students are trying to downplay their symptoms so that they’re not sent into quarantine,” Mohamad said.

Senior Jack Davis, a former RA, says he has heard the same thing.

Davis, an art major, says he was initially comfortable taking some in-person classes but quickly changed his mind. “In one of my classes, the professor told me almost 10% of his students now have COVID,” he said. “I was like, ‘No, I’m not really comfortable.'”

Davis is currently trying to take his art classes fully remote, but that comes with its own set of challenges. Some professors just aren’t accustomed to teaching virtually, and, according to Davis, this means that sometimes the quality in education isn’t there.

“I actually dropped a class today because the professor doesn’t even do anything,” Davis said. “He literally just posted all the assignments for the class. He doesn’t do Zoom calls. He doesn’t have office hours. So I’m like, ‘What am I really learning?'”