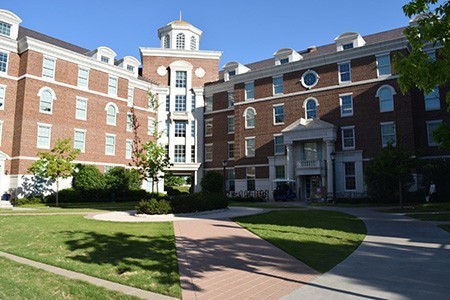 Sophomore Olivia McGrath has called Crum Commons home for her first two years at SMU. During the particularly rainy week of Feb. 20, she came back to her first-floor room and was shocked at what she found.

“My roommate and I noticed that the floor was all wet in our room,” McGrath said. “It was super weird because the carpet was soaked, and we had no idea why.”

As it turned out, a gutter pipe in the wall was in the wrong place. Instead of dumping all that rain outside, the pipe was dumping it into the walls and flooding students’ rooms. This is not an isolated incident.

SMU unveiled its sparkling new Residential Commons in the Southeast Quad just three years ago and the plumbing has flooded at least six times for various reasons in the past academic year, displacing approximately 130 students. Fire system pipes broke at Armstrong Commons Feb. 12, flooding one-third of the rooms, while Kathy Crow and Ware Commons have seen pipes break as well.

Last semester the entire Southeast Quad endured a failure of its grey water system, which deals with all water waste not from toilets. The plumbing was shut off, leaving students with no showers or working toilets for days. Most recently, Armstrong and Ware both experienced flooding just before spring break.

These incidents leave students displaced, walls and belongings damaged, and SMU facing thousands of dollars in insurance claims, repairs and hotel costs. Furthrmore, most of the leaks can’t be fixed until all residents leave the buildings this summer, meaning an equal probability of flooding throughout the semester.

Ellen Shew Holland, associate vice president of SMU’s Risk Management Office, said the university is working with its property insurer to figure out what exactly is causing the pipes to break.

“We have engaged a forensic engineer to conduct inspections and testing to determine the root cause of these incidents,” Holland said in an email.

Holland said the forensic engineer recently competed the inspection and recommended that SMU replace the caulking used to seal the sprinkler pipes and walls.

Unfortunately for students, the problems aren’t likely to be fixed until right before finals week, Holland said.

Freshman Senator Zachary Kosub has used his role with Student Senate to work with university administrators in helping affected students during the leaks. Kosub doesn’t believe the repairs will happen that quickly.

“It’s beyond the scope of fixing it in a week or inspecting it in a week,” Kosub said. “The problem will happen and they’ll patch it and replace that segment, but as far as replacing the system, they can’t really do that until summer.”

Director of Residential Life Jennifer Post said Residence Life & Student Housing (RLSH) will arrange hotel rooms for any students who are exiled from their rooms. Every time the Commons flood, students who need to be relocated are booked at the Magnolia Hotel on Northwest Expressway. The average room at the Magnolia costs about $150 per night according to its website; while SMU is getting a discounted rate, putting one-third of Armstrong residents in hotel rooms for a week could cost up to $80,000.

Despite RLSH offering to arrange everything, many students opt out of the hotel room. McGrath said it’s easier just to crash on a friend’s couch. She stayed on various friends’ futons for almost a week in February due to flooding.

“It is nice to have the hotel room,” McGrath said. “But it is also an inconvenience because I have to pay for Ubers back and forth because I don’t have a car on campus. So, I ended up staying in a friend’s room because it was more convenient.”

Kosub said students felt disconnected from the SMU administration during the process of fixing their rooms and belongings. SMU’s RLSH shares this responsibility with the Office of Risk Management. RLSH provides forms for damage claims and offers free laundry services while Holland and the Office of Risk Management oversee the claims process for students whose items were damaged during the leaks.

“We know this has been an inconvenience for the students whose rooms were affected,” Holland said. “And we have appreciated students’ understanding through this process.”

Post said her office emails students as soon as possible after a leak with instructions and information. In February, residents of Armstrong Commons were updated on what was happening in their rooms by a series of nearly daily emails from their residential community director Lauren Cove.

On Feb. 13, Cove sent an email at 5 a.m. saying “While I do not have a definitive answer, it seems water may have tripped the fire alarm system causing the alarms this morning.” This email came after a night of repeated false fire alarms set off by the faulty pipes.

Each subsequent email detailed exactly what had been fixed, what was soon to be fixed and whom to contact with questions. Cove also emailed students directly when their rooms were ready to reoccupy.

In Crum Commons, McGrath did not experience this level of communication when she was dealing with the maintenance staff working to fix her room.

Kosub is determined that no student should feel the way McGrath did. He is part of a subcommittee in Student Senate specifically working to help students know what to do and what their rights are when these leaks happen.

“What I’ve been focusing on is making sure students feel like their concerns are being heard,” Kosub said. “Just making sure people feel like they’re taken care of and that these issues are resolved.”

McGrath however, is ready to move on. As a rising junior she is no longer required to live on campus.

“I am living off campus in a townhouse off of Rosedale,” McGrath said. “I am excited to leave the dorms.”