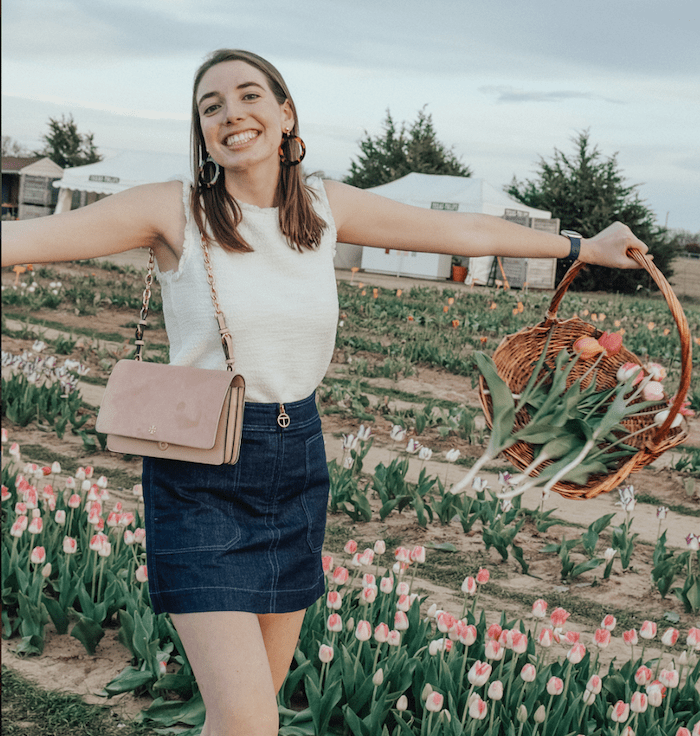 Bella Bernardini walked into the coffee shop with a big smile and a Nashville Predators tee tucked into her jeans. No one looking at her could tell she had just won the fight of her life.

Almost three years ago, Bella’s life changed in a short, sudden instant. During her senior year of high school, she suffered from a single seizure. With no medical emergencies prior, she, including her entire family, had no warning. Soon she would be fighting for her life, diagnosed with a rare pediatric tumor. She still feels the effects of her diagnosis although she was given a clean bill of health.

“When I first came to SMU, I was still going through treatment,” the junior said. “I feel like when something happens in your life that is so monumental and takes up all this time, you realize that out of all the kids there, I was the lucky one.”

“I feel like when something happens in your life that is so monumental and takes up all this time, you realize that out of all the kids there, I was the lucky one.”

At the hospital, doctors came across a tumor in the left side of Bella’s brain. A week later, she was transferred to a hospital in New York City for a surgery. As a New Jersey resident, New York didn’t seem too far away. But in an uncertain situation, a few hours felt like a lifetime.

Bella’s family waited hour after hour for the doctor to come out of the OR. Five hours passed, the estimated time of the surgery. Hour six came and went. Then did hour seven, eight, nine and ten.

“It was supposed to be a five hour surgery, but it turned into a ten hour surgery because they found out the composition of the tumor was really unusual,” Bella said. “When they were operating, they found out that parts of it were really calcified, but other parts were still gooey.”

To an untrained eye, the composition of the tumor means almost nothing. But to a surgeon’s eye, a partly calcified tumor means the tumor is half benign and half malignant, an incredibly rare form of tumor.

Post-surgery, Bella’s life didn’t exactly continue life as normal. She waited weeks for the lab to release the findings of her tests. She spent the days of waiting in uncertainty and fear.

“After the surgery, everyone expected me to have a lot of issues, especially with speech. But when I woke up, I had no problems, no complications, just a bit off-balance,” Bella recalled. “For a week, I had to stay in the hospital until I could walk on my own, then I went home and just sat there and healed for a month, waiting to find out what was going to happen.”

After a month of testing, the results from the lab opened Pandora’s box for Bella and her family: the tumor was cancerous. In the midst of medical explanations and plans for the future, Bella was explained tumors are ranked on a scale of one to four, one being rather harmless and four being the “months to live” kind.

After a month of testing, the results from the lab opened Pandora’s box for Bella and her family: the tumor was cancerous.

“Mine was a three,” Bella said. “It’s called an anaplastic astroblastoma.”

Anaplastic astroblastomas are one of the rarest forms of tumors, typically only emerging in young adults. With not much known about this particular type of tumor, Bella refused to be lumped into a category. Bella refused to let the tumor change her life more than it had already. The first step to moving forward from the surgery and the treatment was to tell her friends.

“It was super awkward. When I first came here, I had never talked about it with anyone,” she said. “I remember I would always say, ‘I had cancer, but I’m okay now!’”

Although a pediatric brain tumor is not such an easy topic to disclose, Bella’s friends were forthcoming with their love and support.

“It’s hard because it’s not something that I’ve experienced or know about,” Amanda LaBell, SMU junior, said. “It didn’t change the way I looked at her. I know when people have to tell something to someone, they will think, ‘they will think I’m weird or act differently around me’ so I just didn’t want to treat her differently.”

Bella has gone through years of harsh medications and long hours spent at the hospital. She was treated with proton radiation therapy, and then chemotherapy through pills. She has to get vitals taken, blood drawn and sit through countless MRI’s. She experiences overwhelming bouts of nausea and is on watch for a specific case of pneumonia that has been linked to her treatments. She endures immunotherapy treatments to this day. She will continue her hospital visits and medications for the next ten years of her life. With everything Bella has endured, no one would blame her for feeling tired or downtrodden. Yet, over everything, she is most of all grateful.

“I was the one who got to keep most of her hair and most of the times felt pretty good,” Bella said. “I got to go to school five hours by plane from where all my family is. There are so many kids that have to put their lives on hold for these crazy things.”

Bella’s fighting spirit has not only touched her family, but has spread to her friends.

“When I found out about Bella’s tumor, my respect for her grew so much,” Avery Kout, SMU junior, said. “She has gone through a lot, but has taken her experience and uses it to fuel her passion for helping others. I am in awe of her strength.”

Hospitals that devote resources to finding cures has caught Bella’s attention and focused her passion. Children’s Health Hospital treats everyone from toddlers to adults who suffer from all diagnoses under the sun.

“Children’s not only try to help heal kids, they still want them to feel like they’re kids,” Bella said. “I definitely want to be someone for the rest of my life who is a supporter of that, whether it’s raising money or volunteering. I want to do something that allows me to go back and benefit pediatric illness and injury.”